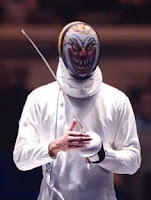 The KOTCB blog is pretty hard on late night talk show hosts (or any comics really) because I see them as court jesters for the administrative state and consider most of their commentary stupid and their humor juvenile, but we're talking about a mass audience appeal here so what should I expect? A point of view is the pre-requisite for making any kind of joke and to be funny a comedian must understand his audience and their assumptions before choosing a foil to lunge, perry and riposte against so that he might deliver a satisfying touché moment. The piste of acceptable opinion is long but narrow so none of these guys (or gals) can step too far to the right or left, nor can they turn around and stab the invisible force that propels them forward, ever forward. In short, it is a job for half-wits in that, though they might be witty (and certainly many of them are) their humor is only unleashed on half of their available targets - at least 50% of the people, places and things that should be, need to be, skewered fall in the no touch zone and walk away unscathed. To better understand what I'm getting at a brief review of Clown Bell Ringing is in order:
"What spurred you to the keyboard this time?", you might ask - well, it was an article in the Atlantic by CAITLIN FLANAGAN titled "How Late-Night Comedy Fueled the Rise of Trump" and you can read it yourself by clicking on the link but if you really want a laugh then listen to it read aloud by a most proper matron which, come to think of it, is the authentic voice of The Atlantic Magazine.


There is a lot to unpack here but as I understand it Trump is horrible and the late night talk show hosts are horrible back (how can't they be) but the unfortunate side effect is that the comics contempt for Trump incites resentment in the heart of Trump supporters.


Though aimed at blue-state sophisticates, these shows are an unintended but powerful form of propaganda for conservatives. When Republicans see these harsh jokes—which echo down through the morning news shows and the chattering day’s worth of viral clips, along with those of Jimmy Kimmel, Stephen Colbert, and Seth Meyers—they don’t just see a handful of comics mocking them. They see HBO, Comedy Central, TBS, ABC, CBS, and NBC. In other words, they see exactly what Donald Trump has taught them: that the entire media landscape loathes them, their values, their family, and their religion. It is hardly a reach for them to further imagine that the legitimate news shows on these channels are run by similarly partisan players—nor is it at all illogical. No wonder so many of Trump’s followers are inclined to believe only the things that he or his spokespeople tell them directly—everyone else on the tube thinks they’re a bunch of trailer-park, Oxy-snorting half-wits who divide their time between retweeting Alex Jones fantasies and ironing their Klan hoods.

A few comments should be made at this point.


Want an example? Check out this twofer - An Englishman (i.e. Constitutional Monarchist) clutching his green card who pontificates on Americas shortcomings once a week on HBO and a Frenchman from the Carolina plantation suffering split personality disorder discuss the perils of "normalizing" Trump.


"Things are not what they were supposed to be." Oh, and how is it that "things" were supposed to be? Getting your face on the cover of Rolling Stone magazine is supposed invest that person with "hipness" or some unspeakable authority in Americas late night consciousness. Betsy DeVos, a Billionaire (and I don't care how she got it), devoted her life to improving education in America instead of popping corks with Jann Wenner in the south or France and that is supposed to make her an unacceptable choice for Sec. of Ed. The UK is supposed to have given up its Empire and be happy about it because now they don't get blamed for everything. There is supposed to be zero chance that John Oliver could get his green card revoked and sent packing back to jolly old England to take over the James Bond franchise. But that's not the way things are - not anymore and honestly, if I were Trump, I'd make up some reason to pull Oliver's legal status and send him home just for kicks-and-giggles.


DHS Agent: Mr. Oliver I'd like to ask you how you feel about living in America?
John Oliver: "It exhausts people, it is exhausting. It feels like inauguration day was 114 years ago. We have a long way to go. It is easy to be angry on adrenaline, but it is much, much harder to be angry when you are just tired. And this is going to be an exhausting four years... Four years, eight years, maybe twelve. Words don't mean anything anymore, why would numbers?"
DHS Agent: I see, well speaking of numbers it looks like you've been earning a very good salary in the years you've been living in the United States and as part of President Trump's "Buy American, Hire American" executive order the practice of hiring foreign comedians to do jobs that American comedians are perfectly capable of doing comes to an end effective January 1, 2018. You have approximately eight months to get your affairs in order and leave the country.

Does anyone think there isn't 1000 funny Americans who could do a show just as good (or better) than John Oliver? Just surf around Youtube for 30 minutes and you can find amazing talent but they'll never get picked up by HBO or any other network because their worldview and comedic gifts might target the wrong people and institutions. Comedians in general, and late night talkshow hosts in particular, just squandered 8 years of solid gold material in the personage of Barack Obama who did something every day that could have been mined for belly laughs. They wouldn't (or to be honest couldn't) go after it - they were not pointed that direction on the fencing line and failed to do their job. They are infected with The smug style in American liberalism and, as Emmett Rensin points out:


We have long passed the point where blithe ridicule of the American right can be credibly cast as private stress relief and not, for instance, the animating public strategy of an entire wing of the liberal culture apparatus. The Daily Show, as it happens, is not the private entertainment of elites blowing off some steam. It is broadcast on national television.

The left (and the right) ask why Trump? What has happened to the fundamental decencies of our political process? What have we become? The answer is that we have become a democracy again and as exhausting as that might be for knowing late night comedians it is invigorating for the rest of us.