The gears are grinding on the left side of the isle.


In the hierarchy of the oppressed we’re witnessing a 90 MPH head on collision - it’s insane. And the public reaction has been dispiriting (to say the least) for those of us who want to win and survive. Take, for example, this note from an expat living overseas who's been monitoring news and social media to gage the public mood here in America.

Why are ‘we’ so unwilling to tell the truth – even within our own circle of friends?
Much less, why are ‘we’ so afraid to speak out to others, of what is right and what is wrong? Look at FB. Total silence ex Hillary supporters.
Why is that the case, when I know that at least 60-65% of the people that I know personally, are fundamentally opposed to her? Why are we so afraid?
Whom are we afraid of (fellow AmeriKans?)
Do we lose our reputation and integrity by describing our reality as a reflection of the cold hard facts?

For 15 years I lived on the upper west side of Manhattan (Bush41, Clampett, Bush43) and in that time I spoiled more than my share of social gatherings (cocktail & dinner parties, picnics, gala benefits, etc.) by simply questioning - not vociferously arguing against mind you, but simply questioning - the received and commonly accepted wisdom (I use the word loosely) of my fiends, co-workers and neighbors. It didn’t take much to send these fine people into a clench fisted, bulging eyed, spit spraying rage for a question as simple as “do you really think it’s OK for the POTUS to bald faced lie with indignation and self-rightious anger to the people he “represents” about an affair with his intern?” followed up with “do you honestly think that Monica is the only one he’s been fucking?” or “do you honestly believe that Hillary didn’t know?” - The answers to these questions were always - ALWAYS - a qualified yes, yes and yes. And this example is a simple, though tawdry, domestic squabble that would send these people to the trenches and ready for war. You can imagine how they felt about questions like “did the ATF really need to burn up all those women and children in Waco, TX?”, “have you ever read Tim McVay’s testimony?”, “Why do you really think Webb Hubble is still in jail?”, “do you think it’s a good idea to let the North Koreans have nukes?”, “why are we bombing the Serbs?”, or my favorite, “you realize that we are bombing Iraq every day, right?” (this was during the Clinton presidency)

There is no hope of changing these peoples minds or opening up their thinking through rational argument. They turn reason against themselves and their political enemies. This is the truth that Trump knows and is exploiting - he’s not trying to argue his points on their terms - he’s not trying to reason with them. Why not? Because it doesn’t work. They are so self-assured and reenforced by the meta media messaging and cultural rot that their capacity for reason is limited to a small, well defined area and going outside of that boundary is scary. That’s why the Pulse nightclub attack is so difficult for them to process and they’ve fallen back on gun control as a solution.

I’ve flamed it up on FB several times over the past 8 years and, to be brutally honest, I’ve crushed my enemies like Conan the Barbarian, but you’d never know it from their reaction - they honestly believe that they’ve won the argument. very dispiriting in one way, but hilarious if you can just lighten up and roll with it. People, as a rule, do not invite ridicule and scorn upon their person and will seek to avoid needless confrontation (or even needed confrontation) and that is what they will get 100% of the time if they say anything against the ruling orthodoxy - so they stay quiet. It’s a shame, but completely predictable and is a very effective tool for the left. 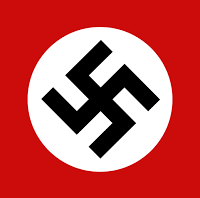 Which brings me to Steve Colbert and his Glen Beck imitation on late night TV where he connected the dots of Trump reasoning and came up with a gammadion cross, an auspicious object or symbol that's been used as a decorative element in various cultures since at least the Neolithic age. Colbert is probably too nativist and xenophobic to realize that he's sketching out an ancient symbol that, to his Indian and Buddhist viewers at least, has a very auspicious meaning. NOT what he's trying to get across - he's trying to imply that Trump is a Nazi but to do that he would have to rotate his Swastika at a 45 degree angle to mimic the Führer's design modification adopted by National Socialists when they commandeered this symbol for the greater glory of Germany. A subtle difference to be sure and, as I point out in my comments above, the Colbert's of this world don't do subtlety which requires an open knowledge of culture, history and human psychology.

Colbert's schtick did highlight one interesting aspect of Trump and his "movement" in that the Elvis from Queens and his many fanatics have no symbol, flag or logo (save the man's name) to rally around and plaster all over their placards and car bumpers. What kind of totalitarian can't be bothered to hire a Madison Ave branding company to come up with some eye catching symbol around which the knuckle dragging proletariat can rally? Almost everybody else in the GOP field paid up to get their own symbol but Trump's got nothing. If he were able to pull the swastika out of the cesspool the Nazi brown shirts drowned it in he really would be doing a service to the world by revitalizing this otherwise glorious symbol (granted, it's a BIG otherwise). 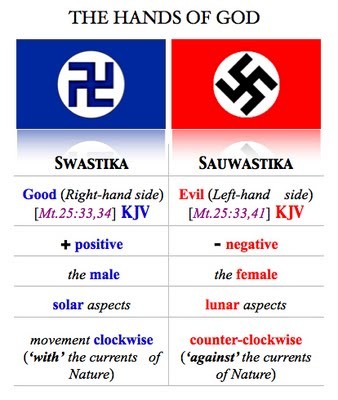 If anyone can do it, he can because if you contemplate the symbols actual meaning Trump lines up pretty well - Good, positive, male and "with Nature". It's a heavy lift, no doubt, and simpletons like Steve Colbert (and his audience) would never be able to process the nuance of the symbols angles and positioning - they'd just see a swastika and start screaming. What Trump needs is some way to throw the difference between the good swastika and the bad sauwastika into sharp relief - you know, give the opposing symbols some contrast. Perhaps there's a political opponent who could represent the negative meaning of the sauwastika as robustly as Trump represents the positive interpretation of this ancient symbol. Someone who's evil and negative, preferably a female who goes "against Nature" and promotes a neo-Nazi ideology turned inside out to disguise its base designs and motivation.  Hmmm, I wonder where Trump could find such an opponent? Too bad Marine Le Pen is running for president of France - she's the perfect foil.

Anonymous said…
The "Hands of God" image is incorrect. A Sauwastika is the blue flag and the Swastika would be the red flag (Nazi flag), but without the tilt. So really you need to switch the images and rotate the Swastika and then the information below would be somewhat correct. You have to remember that the Nazis used the "good" symbol because they thought they were in the right. Everyone always thinks they are the hero, even if everyone else can see that they aren't.
2:07 PM

MrWhiteChocolateChasT said…
For the purposes of this blog post I'll leave it as it is - you get the point.
6:24 PM