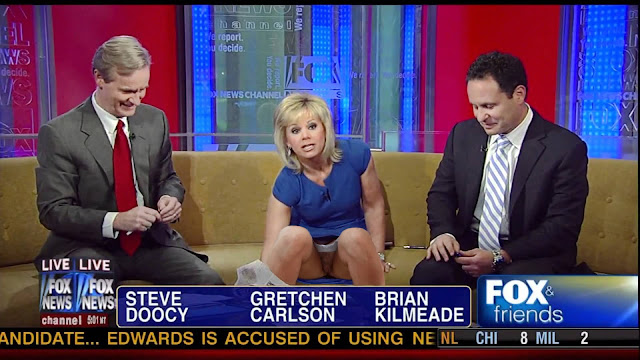 I'm a regular Fox & Friends viewer (mostly in protest of the other insipid morning programs like Today and Good Morning America) so over the years I've gotten to know Gretchen Carlson pretty well. Stuck between Steve and Brian she always seemed a prudish scold with an irritating, self-righteous demeanor that I simply put up with because I figured some people in the Fox audience actually liked her persona. It was obvious that Steve and Brian did not, but they were stuck with her like so many talking heads and had to make the best of it - which they did. Besides, she was no worse than any of the other women on morning show TV - I mean, you're only going to find a certain kind of person to do this kind of work and that kind of person is the Gretchen Carlson kind. Then, one day, she was gone and replaced by Elisabeth Hasselbeck and the F&F ratings began to climb, and climb and climb - in two months viewership was up 10% which is real money in TV land. But what to do with Gretchen? Stick her in the 2PM slot for a full hour and maybe she'll find an audience of like minded middle-aged women with nothing to do in the afternoon. Didn't happen. She didn't grow audience and competitors like CNN and MSNBC were winning share. Broadcasting is a very tough business and if a TV hostess doesn't make her numbers she's gone... period. It's not personal, it's not about sexual favors - she could give the best blow job ever but if she doesn't deliver audience and advertising dollars she'll be fired.

But in this commonplace firing Gretchen Carlson did what Ted Turner, Jon Stewart and Barack Obama could not do - she killed Fox News. How'd she do it? Well, in what Think Progress calls "stomach-churning allegations" surfaced in a civil action law suite (so you can read it yourself) Roger Ailes demonstrates that he has Gretchen's number, knew she was a loser, but couldn't figure out how to get her to leave his cable news network. As the complaint makes clear Gretchen is the kind of girl who thinks it "only rains on women" and is "easily offended about everything." That's because she's a "man-hater" and "killer" (as in buzz kill) who's always trying to "show up the boys." That while she's probably capable of "doing sweet nothings when she wants to" being married to Gretchen is probably "boring", "hard and "not much fun" raising the obvious question - who would marry her? All of these observations are simply true for anyone who's watched Ms. Carlson's work and if truth is harassment then so be it but my stomach is feeling fine.

For stomach-churning allegations one needs to read Gabriel Sherman's article in NY Magazine titled "The Revenge of Roger’s Angels" which tells the whole story (through a jaundiced lens).


It is unfathomable to think, given Ailes’s reputation, given the number of women he propositioned and harassed and assaulted over decades, that senior management at Fox News was unaware of what was happening. What is more likely is that their very jobs included enabling, abetting, protecting, and covering up for their boss. “No one said no to Roger,” a Fox executive said.

If half the stories in this article are true, and even reading between the lines as I do with profound skepticism, it is clear that everyone in the media industry knew that Roger Ailes used his position of power to "force" women to have sex with him. When I say everyone I mean everyone - not just Murdoch and the Execs at Fox but all the people in the business - the make-up artists, the news readers, the producers and writers - everyone. And that includes everyone at the other cable news networks, everyone in the New York newspaper business, everyone in the magazine trade, everyone in radio - they all knew because they all socialize and work with each other and talk and talk and talk. In fact talking is what those people do best and gossip about the boss requesting sexual favors gets around pretty fast. So while Gretchen's tale of woe is news to most of America, it's not news to anyone who works in the Manhattan media bubble which raises the question, why now?

Ailes was allowing Fox News to be used as a platform for Trump to get his message out to the masses  which was causing a civil war within the "Fox family' and the Murdoch family had to put a stop to it. Simple, promise a 50 year old mediocrity $20M if she'll file a civil law suite and get some of the other disgruntled ladies at Fox to jump on the payday bandwagon. In a kind of cosmic justice Gretchen Carlson is elevated to feminist hero and all those smarty-pants liberals have to eat a decades worth of nasty words they've said about her - better still, she stands tall as a mirror reflecting the true face of "feminism" right back at 'em and they see, incredible though it my be, that they are Gretchen Carlson.

Fortunately for me Roger Ailes was still running the show earlier this year when he picked the fetching Ainsley Earhardt to take the center seat on the curvy couch. She's a beautiful, charming, southern and God fearing American who lights up my morning in a way that Gretchen Carlson never could. Whatever she had to do to land this job was worth it and I thank her for it. 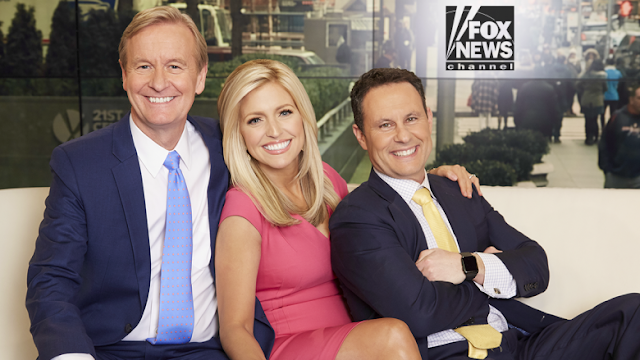 Unknown said…
As an avid viewer of Fox, I wondered what really happened with Carlson. She seemed passionate enough about her job, she was that typically pretty woman from Minnie-sota that those of us from that part of the world are familiar with, but there was 'something' annoying about her. Maybe it was that she is "too Midwestern" with that 'neat-and-tidy' home life mentality I envisioned. But it was more than that; she had a personality that turned me off too, and I suspect she was that woman who always had to one-up the men.

What I found a little disgusting is how a guy who resembles Alfred Hitchcock could even think he could 'bed-down' or pull the 'casting-couch' thing any woman half his age is beyond me. What I find a little hard to accept would be Carlson ever allowing herself to be put in that position without nipping it in the bud right away. If she did allow it, it begs the question; was she out for blood and the big payday all along?
7:26 AM