KOTCB Art is a collection of compositions that have been created for blog posts and the simple enjoyment of telling 1000 words in one picture. This is a Pinterest page with a constantly growing collection of images some of which have links to their corresponding blog post and some connected to nothing at all. 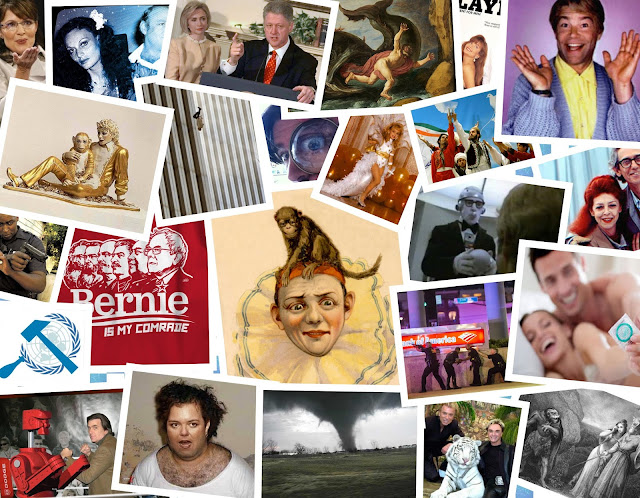 Below are a few of my favorite KOTCB "compositions" with some descriptive text to help set the mood for each picture.
Plan B - This little mind map was created around the time info about Hitlery's private email server was leaked by someone in the US State Department (I wonder who that could have been, hmmmm?) and it looked, for a time, like the (D)'s were going to abort Her Presidency yet again. I draw attention to HRC's obvious challengers for the 2016 Donkey prize and show their shadow spirit pop culture doppelgänger. See KOTCB Plan B for the full context of this picture.
JEB! Skull - It is an indictment of US political system that both major political parties and the FakeNews media + academia, the military-industrial complex, trade unions, church leaders, bankers and pretty much everyone who has a say in such things were perfectly content to have 2016 be another Bush vs. Clinton presidential contest. Absolutely disgusting. See KOTCB Guarantees if you can stomach it.

A few weeks ago Duke lost Coach K’s last game at Camron Indoor Stadium to the schools hated rival, North Carolina University, in an epic grudge match. It was an “ unacceptable ” finale for the maniacal ferret-faced competitor who created the 40 year dynastic Duke hoops program with 1,000+ wins and fists full of ACC and NCAA championships but for Tar Heels everywhere it was a day of retribution. Michael  William Krzyzewski, is a red-blooded All-American college basketball coach of Polish and Ukrainian descent who grew up in Chicago’s famous Ukrainian Village which is (or at least was) culturally very reminiscent of the Rus borderlands. That is to say that young S h-shef-ski   grew up as  far away (psychology) from Dixie as is possible while still living within the borders of the USA. That makes him the perfect choice to represent Duke University and the Yankee overachievers who emigrate to Durham for 4 years of education and networking before moving back to non-Southern civilization. T
4 comments
Read more

Who voted for this guy? It's been ten days since the results of the Maricopa County, Arizona ballot audit were released to the public and presented at a hearing held by the state senate. This exercise in democratic accountability had been going on for months and, if reports are to be believed, was completed well over a  month before the September 24th hearing where   overwhelming proof of an illegitimate election was presented to lawmakers . The audit showed multiple irregularities, fake ballots, duplicate counts, errors, omissions and egregious acts of sabotage and obstinance by the Maricopa County board of supervisors who did everything they could to withhold and destroy evidence of wrongdoing from the citizen sleuths. The misfeasance of Arizona's political leaders was clearly defined, shocking and (for some) beyond belief but somehow these facts were discovered, organized, packaged and suppressed for MONTHS by the Cyber Ninjas who were attempting to "get to the bottom&q
2 comments
Read more

U.S. District Judge Kathryn Kimball Mizelle finally did it - after 14 months of mandatory masking by order of the Centers for Disease Control and Prevention (CDC) this capricious and ineffectual edict has been ruled unconstitutional and, it follows, illegal.  Since January 29, 2021 the CDC has prohibited citizens to travel without wearing a mask but the insanity actually started as far back as July 14, 2020 when " CDC calls on Americans to wear masks to prevent COVID-19 spread ." That's 643 days of stupidity folks - it covers the Kenosha Riots, the attempted kidnapping of Gov. Gretchen Whitmer, the Fake 2020 Election, the 1/6 Save America March and Insurrection, Jo(((K)))e Brandon's phony Inauguration, Trump's 2nd Impeachment, a horrible year of pathetic "leadership" from every single elected official in Washington DC, a war in Eastern Europe - and NOW, at long last, a federal judge in Florida ends the mask tyranny with one simple ruling from her bench.
Post a Comment
Read more