"Contempt For Those In Poverty"

I don't call out Jon Stewart and his "Daily Show" on this blog for several reasons.
So I've always cut this show, and it's host,  a lot of slack - It only has a few million viewers and I figure most of them are either too young or too cynical to vote. Where's the harm in ye laughing at heavy handed partisanship and editing tricks that ridicule thine enemies. This mirth includes the ludicrous hard on the New America Left has for the dreaded Fox News (Faux News as they call it) and Stewart's gleeful jabbing and exasperated hair pulling when appraising the "Fair & Balanced" cable news network. JS had a fit of Foxoplexy the other night in defense of his President and the rather dismal record the Obama administration has in "dealing" with poverty, or at least what passes for poverty, in the USA. 0 was speaking at GTown U. in DC (located in plush Georgetown - beautiful campus full of 1%ers) on the topic of “Overcoming Poverty”- part of a three (3!) day conference organized by intolerant Christians. And as is his custom when off-prompter, the Light Worker stepped in it:

“I mean, I have to say that if you watch Fox News on a regular basis, it is a constant menu — they will find folks who make me mad. I don’t know where they find them. They’re like, I don’t want to work, I just want a free Obama phone — or whatever. And that becomes an entire narrative — right? — that gets worked up. And very rarely do you hear an interview of a waitress — which is much more typical — who’s raising a couple of kids and is doing everything right but still can’t pay the bills.” 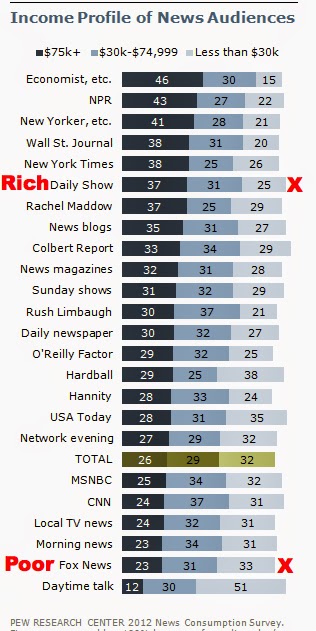 On the last point it is especially ironic that Jon Stewart would spring to Obama's defense considering the fact that fewer poor people watch The Daily Show than watch Fox News. I mean, who speaks for (and too) who? Jon Stewart thinks the anchors at Fox are being overly touchy and downright obtuse about their "obvious" hatred of the poor, but from a Fox perspective the President not only defamed the News Network but also insulted 33% of the FNC audience.

Poverty comes in many forms. There is the material poverty which modernity has targeted as an unacceptable and unnecessary hardship brought about by a lack of efficiently distributed resources and sociological patterns that must be remade into a just and egalitarian framework or system. But there is also the poverty of wit and though it might sound strange for this sentiment to be coming from the KOTCB blog, this is the poverty that afflicts Jon Stewart's audience. Listening to them chuckle and guffaw at video editing high-jinx that's so juvenile it requires a special kind of stupidity for the grown men at the editing bay to even go through the motions to create it breeds contempt in those of us standing on the outside looking in. These rich spoiled brats pay Jon Stewart his generous salary and I fault no man for figuring out how to make people pay him for a service rendered, but what, exactly, does his audience think they're buying? They think they're getting "unfiltered" news with no bias - the opposite of those Hannitized rubes watching FNC, but The Daily Show is "the factor" for the metro-sexual exurbanite. Their mind is just as cloistered and their wit just as impoverished as Gretchen Carlson - probably more so. 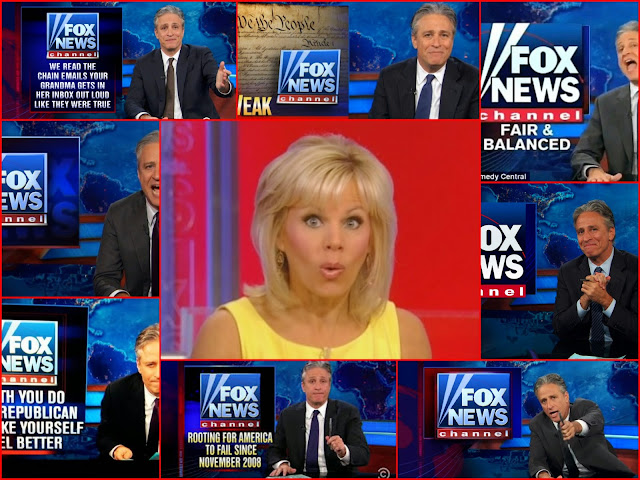