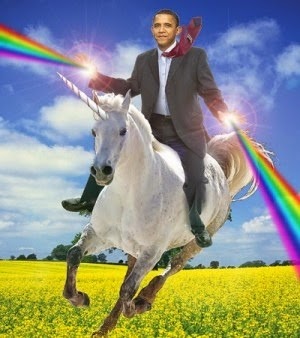 Oh boy, the light worker really stepped in it this time with his sermon at yesterdays National Prayer Breakfast. When you've lost MSNBC...

He's getting broadsides from the right (as usual) and his defenders on the left don't have much ammo in this fight. Obama's incoherent comments on Islam and his "high horse" slander of Christianity make him sound like a sophomore philosophy major yakking it up at the coffee house. He's supposed to be the smartest President we've ever had so why does he sound so stupid?

The history of Christianity is filled with sectarian conflict and, even today, there are violent outbursts within the faith - Protestant Britain vs. Catholic Ireland or Catholic Croat vs Orthodox Serb are just two examples of many. Christian treatment of different faiths, especially in parts of Europe, has also been contentious and oppressive (cruelly so in some cases) over the past 2,000 years. But drawing an equivilancy between Christianity (a moribund force in Europe and a benign force in the USA) with the Islamic State and other terrorist organizations who "twist" their religion (whatever that means) is a rhetorical journey beyond the pale. Again, we must ask why? Doesn't he have any speechwriters?

To understand why we have to discuss the religion (of sorts) that President Obama didn't mention in his comments yesterday. A religion that metastasized 100 years ago into a scourge that decimated Europe (especially after it's towheaded stepchild emerged in Germany) and Asia. This religion did, in fact, commit atrocities every bit as ruthless and "necessary" as those committed by its cousins in ISIS. But this religion is one that views ALL other religions as "false consciousness" and an "opiate for the masses" and though it will, for nefarious purposes, occupy a branch of some established religion to gain legitimacy - see Liberation Theology - it always dispenses with the God part once its parishioners gain political control. This religion is central to Barack Obama's "faith journey" and explains his jaundiced view on Judaism, Christianity, Islam and all competing faiths.