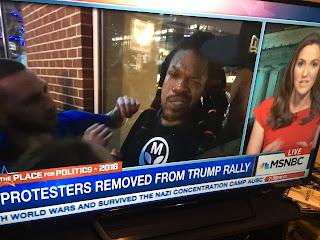 Oh no, the "American Experiment" is in danger of dying (or something) because, well, after two and a quarter centuries it's still in the experimental stage and the International Community (and their domestic compatriots) aren't sold on it's viability. For all the eternal skeptics of this "experiment" there is now proof - proof I tell you! - of its dismal failure in the personage of Donald J. Trump. He's "a guy who tears at the social fabric, who insults the office of the presidency by completely unprepared for it, who plays on bigotry and fear, who is the sort of demagogue our founders feared would upset the American experiment in self-government, well, that kind of guy, you just can’t support, even if it means a defeat" according to Founders expert David Brooks*. And sure, Brooks is a loser, but he's hardly a lone voice in the media sphere. Which begs the following questions: Have any of these worry-warts ever read the Autobiography of Benjamin Franklin? The speeches of Patrick Henry? Ever heard of that other famous New Yorker named Alexander Hamilton? These guys were not afraid of Trump, they were Trump! And they wrote a Constitution that would allow the Trumps of the world to prosper and, if need be, lead within the constraints of a limited government and Federalized civic authority maintained by State and local governments.

There have been two significant transformations since this "experiment" was initiated in in 1787. The first was the Lincoln atonement beginning in 1861 and the second was the FDR counter-revolution of 1932. From a broad historical perspective we're due for transformation number three and it's starting to look like we're going to get it.


Although polls give Clinton a solid advantage over Trump in a general election, many Democrats remain wary because of what one party strategist called “the unpredictability of Trump.” As one former member of Obama’s campaign team put it, “I feel like in some ways my brain has to think differently than it ever has.”

Sounds like the "experiment" is doing exactly what it's supposed to be doing.

*BTW - What would the Founders of this Nation have thought of a Government funded "news" program broadcast nationwide spewing out Federally approved propaganda to the citizenry?