Blackwater in the School House 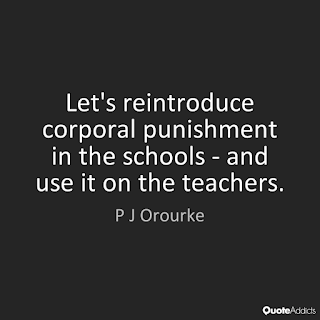 From Wikipoo "Formal education occurs in a structured environment whose explicit purpose is teaching students. Usually, formal education takes place in a school environment with classrooms of multiple students learning together with a trained, certified teacher of the subject. Most school systems are designed around a set of values or ideals that govern all educational choices in that system. Such choices include curriculum, organizational models, design of the physical learning spaces (e.g. classrooms), student-teacher interactions, methods of assessment, class size, educational activities, and more."

Yeah, a lot more. And the limits or liberty of those choices are a primary concern of the Federal Government because... because... I don't know, maybe it's written into the US Constitution or something. No? Well, I guess education has been run by the Feds for, like, 200 years and that's just the way we've always done it. No? The Federal Department of Education was established in 1980 and according to it's supporters does not interfere with state and local control of educational choices. Which makes you wonder why anyone even cares who the Secretary of Education is because the entire $73 Billion spent annually to allow 5,000 bureaucrats (that's fourteen million six hundred thousand dollars per paper pusher) does absolutely nothing to influence education in this country, right? All the hand wringing by the rubes over No Child Left Behind and Common Core is just a bunch of right-wing hysteria because those initiatives are merely suggestions that the States can make use of, if they choose to, as they exert "local control" of the "school system." So what does it matter weather Betsy DeVos or anyone else gets appointed to be Secretary of Education? Gov. Scott Walker gives us the answer:

.@BetsyDeVos is a champion for students & parents. I call on the Senate to confirm her as the next @usedgov Secretary pic.twitter.com/FRQuwmPrSu
— Governor Walker (@GovWalker) January 27, 2017

That "champion for students & parents" line leaves out one critical constituency and when the school bell rings it is that constituency the entire education system is designed to satisfy - Teachers. Sure, DeVos is a Billionaire with "little understanding" of how the public education system works but if you think about it, who better to manage a $73 Billion budget than a Billionaire and understanding the failing US education system would probably constrain her thinking on how to improve it. The real reason is illuminated by WaPO in a great article titled "The popular uprising that threatens the Betsy DeVos nomination" where the paper singles out Anna Caudill from Tennessee as a representative of "the popular". Caudill has an adopted son, FuXia, from China with bone problems who can't speak English and she's so pissed at her public school district for the way they non-educated him that she's filed a law suite in federal court. Though sweet Anna was able to find the $20k-$40K required to adopt someone from China she doesn't have the $35K needed to send Fu to private school so she's raising money on a GoFundMe web site. Until she gets the cash she'll be "home schooling" this Chinese-American to the best of her ability and what lessons will our crippled, Mandarin speaking fellow citizen be learning:


“Vouchers don’t come with any oversight of the schools in which they’re spent,” Caudill said. “They put the parent in the position of trading a child’s civil rights for money.”

The mother of FuXia is trying to teach him to read at home because she is so dissatisfied with her public school and want's other people on the internet to pay for private schooling because if she were to receive a voucher from Betsy DeVos's Education Dept. that money would come without oversight and would endanger the boys civil rights. The civil rights in question are enumerated in the Individuals with Disabilities Education Act which guarantee unlimited amounts of money and other resources be spent on educating Fu and anyone else like him. In the old days "many states had laws that explicitly excluded children with certain types of disabilities from attending public school, including children who were blind, deaf, and children labeled 'emotionally disturbed' or 'mentally retarded.'" Not any more, now our schools are full of emotionally disturbed disabled children and everyone must pay for it. Did I mention that Anna Caudill is a teacher? (The WaPo article doesn't, but she is)


"I homeschooled Fu eighteen months before admitting his issues exceeded my experience. Despite ten years teaching school and tutoring Language Arts, I was confounded. Fu wasn’t progressing beyond third grade reading. We were once again at the mercy of the public school to obtain appropriate education, having exhausted our finances for Fu’s physical therapy."

Confounded you say? Well, that makes two of us. This fact, a fact that the Washington Post purposefully obfuscates, in a story portraying the "popular uprising" of normal, everyday moms against an Education Secretary (of all things) gets to the root of our education problems in the USA. The problem is teachers.

I freely admit that I'm biased in that I hate teachers and have always hated teachers from grade one all the way through graduate school, so I make this claim with a full disclaimer. I have been a student, a parent and (on occasion) a teacher myself so I think I've got a pretty good set of experiences to call on and fully aware of my prejudice I make these claims with whatever level of objectivity I can muster.


Know it alls who demand unlimited buckets of money for the "work" they do on behalf of society they assume a seat of moral authority that insulates them from criticism and accountability. Don't believe me, just go talk to one. Example: Joshua Starr

Trump’s pledge to expand funding for vouchers and charter schools and his nomination of DeVos have captured the attention of these public school backers, said Joshua Starr, PDK’s chief executive, who is a former Montgomery County schools superintendent. “They’re like, ‘Wait. How is this going to work? They’re going to take money from us.’ ”

Right, they're going to take THEIR money from you and spend it where THEY think it will do the most good for their child which, it seems to me, should be a civil right. Keeping the Department of Education filling the coffers of public schools who can't even meet the requirements of the idiotic laws imposed upon them and then get sued by one of their own teachers doesn't make sense to anyone but "teachers" and Jeff Bezos.