Take me to the middle of the George Washington Bridge

The film Network starts on a NYC street with two old friends reminiscing about the early days of Television.  Max Schumacher (William Holden) is telling Howard Beale (Peter Finch) about a time as a young producer he rushed onto the busy New York streets to hail a cab to take him to a morning news live remote shoot. "Take me to the middle of the George Washington Bridge", he yelled at the cab driver. The punch line is the cabbie, thinking Max intends to kill himself, pleads with him not to do it - that he has his whole life in front of him.

The movie parallels this joke when it is recited a second time just before Beale is given the green light to become a modern day prophet on Network TV. Others, off the top of my head, that resonate:

But the introductory scene is brilliant - TV, remote shoot, misunderstanding, suicide, half way to George Washington - it tells the story of the movie in a joke where the characters are laughing but the audience is not. The audience is removed from the reality of the event, removed even from the retelling of the event and that my friends is television in a nutshell. 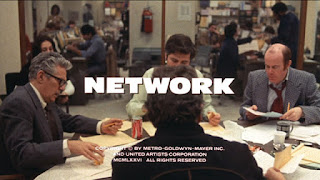 This film, Network, is on my top 5 list - that's a personal statement, not a critical assessment (though I do find it a beautifully crafted, acted and, especially, written film) I mean it's on my top 5 because for me personally it's impact was and continues to be profound. It opened my mind and changed the way I thought and saw the world - it tells a serious truth. Television, and now the Web, programs human beings - it is a tool for programming, a tool used by the machine to dehumanize and turn man into a kind of machine too. Don't believe any of it. As Howard Beale says, before he is reprogrammed by Arthur Jensen, if you're looking for truth then look to God and in so doing look to your true self because that's the only place you'll ever find truth. It's not on TV - it's not in the vast programmed media sphere pulsing around you 24/7. The machine hates this message - this truth - and it want desperately to deny it and control it, but the truth crushed to the ground a thousand times will always rise up.


I watched Network again last week and the DVD came with some bonus interviews and segments - comments by cast and crew, etc. The usual log rolling and inside baseball crap they package up around these movies. But there were a few things worth watching. Sidney Lumet's comments on how he found and prepared his actors for their roles. Walter Cronkite's preposterous claim that Network was not an accurate depiction of what went on at the big three and that, in essence, it wasn't true. On that point, let me tell you, I worked at one of the big three and Network is about as true to life as it gets - only a brainwashed old man could think otherwise. And finally, an interview with the great Paddy Chayefsky on the Dinah Shore show where he spoke the truth - the setting could not have been better - and God bless him for it.


Notice the freedom of 1970's America - crazy cloths, fat, bearded and smoking on the god damn set!
Bring it back America - it's not too late.