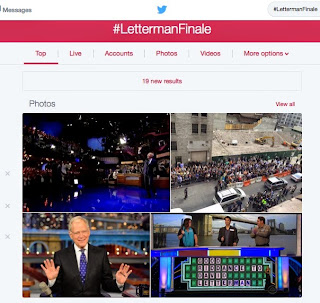 Last night David Letterman "signed off" after 30+ years of late night TV and over that time he evolved from a cynical smart-ass to a cynical liberal smart-ass. This is a brief goodbye posting - Letterman hardly rates on the KOTCB blog - and a comment about TV Finale's in principle. They are almost all horrible and the hype and outpouring of grief by TV critics and log-rolling entertainers is annoying. I remember David Letterman when he had a morning show in 1980 - it was hilarious and totally original and, as one would expect, no one watched it. He moved to late night and there he stayed until last night - insulting guests, mocking staff and local store owners, employing his mom, throwing index cards and "inventing" the Top Ten List. Last nights last list was delivered by comedy all stars and the nostalgia reigned as it always does at these TV moments.

10. "Of all the talk shows, yours is most geographically convenient to my home"
9. "Did you know you wear the same cologne as Muammar Qaddafi"
8. "Your extensive plastic surgery was a necessity and a mistake"
7. "I have no idea what I'll do when you go off the air...you know, I just thought of something - I'll be fine"
6. "Honestly, Dave, I've always found you to be a bit of an over actor"
5. "I'm just glad your show is being given to another white guy"
4. "Thanks for letting me take part in another hugely disappointing series finale"
3. "You are to comedy what I am to comedy"
2. "Thanks for finally proving men can be funny"
1. "I'll never have the money I owe you"

That "just selling soap" line is one Letterman used in his early late nights and it was funny, self-deprecating and true - though he seemed to forget it as he grew rich and famous and richer. I don't know where Dave Letterman will rank in the finale Top Ten - I've only seen 3 of them (M*A*S*H, Seinfeld and Johnny Carson) but I'm glad his run is over. Hosting this kind of show after reaching the age of 50 is kind of sad and after age 70 it's just criminal. Make room for the young blooded Colbert (age 51) - he's no Jack Paar, but no one like Paar can make it onto Network TV these days.