It's been ten days since the results of the Maricopa County, Arizona ballot audit were released to the public and presented at a hearing held by the state senate. This exercise in democratic accountability had been going on for months and, if reports are to be believed, was completed well over a  month before the September 24th hearing where overwhelming proof of an illegitimate election was presented to lawmakers. The audit showed multiple irregularities, fake ballots, duplicate counts, errors, omissions and egregious acts of sabotage and obstinance by the Maricopa County board of supervisors who did everything they could to withhold and destroy evidence of wrongdoing from the citizen sleuths. The misfeasance of Arizona's political leaders was clearly defined, shocking and (for some) beyond belief but somehow these facts were discovered, organized, packaged and suppressed for MONTHS by the Cyber Ninjas who were attempting to "get to the bottom" of what happened on November 3, 2020. This inconceivable delay in releasing information - the "proof" that everyone keeps demanding - reminds me of the fatal flaw in the Mueller Report and the absurdity of that eighteen (18!) month investigation into claims that Donald J Trump was placed in the White House by means of nefarious Russian spy-craft. I mean, at what point in the investigation does someone run to the nearest news camera or senator or social media influencer and scream, "stop everything right now because Vladimir Putin is running our country" (or in the case of the AZ audit, "Wow, Biden didn't really get elected POTUS") and a Constitutional Crisis starts? Is it when the investigators are 25% sure the civic leadership is compromised by espionage? Is 50/50 odds the tipping point? If there's a 43% probability that Putin is running US foreign policy, appointing cabinet secretaries and tossing the nuclear football around is it okay to stay quiet about it until all the "proof" is collected and organized?
Don't answer that. Those are a bunch of rhetorical questions posed with the objective of triggering speculation and amusement. There is no correct answer but resurrecting the Russian Collusion Witch Hunt, Plan B, Plan C, Plan D, the sad example of Jim Comey and Robert Mueller's unpleasant immolation in the context of MAGA style election integrity efforts does raise a question with a nauseating answer?
Why didn't Hitlery Clampett demand a full forensic audit of the Michigan, Pennsylvania and Wisconsin elections in 2016?
HRC didn't lose the electoral college vote by much and correctively flipping two of those states would have put Her Highness in the White House. The margin of victory in each of these 3 states was close - they couldn't officially call MI until 3 weeks after election day. Democrats know how crooked these elections are because they've been complaining about them for decades - Florida in 2000 and Ohio in 2004 to cite two recent examples. Surly the Democrat party has their own deep pocketed version of Mike Lindell (the pillow guy) who would bankroll an investigation into the accuracy of the tabulation machines (computers). Speaking of computers, it's safe to say that Liberals in Silicon Valley could field their own version of Cyber Ninja's to find irregularities in the software, lapses in security updates, internet connectivity, machines with dual bootable hard drives, etc. and "prove" that Russians hacked the 2016 election. The criminality was there waiting for brave champions of democracy to demand audits of the election and expose the truth about Russia's interference and Trump's illegitimacy. Then why didn't Her audit happen?
Strange as it might seem, a Hillary/Soros/Gates 2016 Forensic Audit to expose election fraud (and probable Russian interference) would have generated headlines very similar to these:
The reason Team Clinton did NOT demand a deep dive accounting of the Blue Wall votes is because the Democrats know that any hard, clear eyed look at democracy will lose them a lot of seats at the federal and state level government and show the American people how illegitimate, by American civics standards, ALL Uncle Sam government is. Normal people don't vote for the candidates our political parties maneuver onto ballots through backroom deals or arm twisting and if the filthy communists or reactionary fascists who comprise the majority of politically committed ideologues were allowed to nominate and vote for their preferred candidates we'd end up with a cesspool in The Swamp. Most of the blocking and tackling required to thwart the will of the masses is accomplished in the pre-primary process of party bosses and oligarchs giving the nod to tested apparatchiks who could never win a popularity contests (see Mitch McConnell and Chuck Schumer) but will accept an office won through a rigged election. A disgruntled politician appealing the results of a presidential election has the consequent effect of pulling back the curtain on the Hobson's choice We the People are allowed for EVERY candidate in our counterfeit elections. So no one ever audits the elections and politicians who have gotten the okay from on high -be they AOC or Ted Cruz - close ranks, circle the wagons and ignore obvious voter fraud because in exposing it they would implicate themselves. 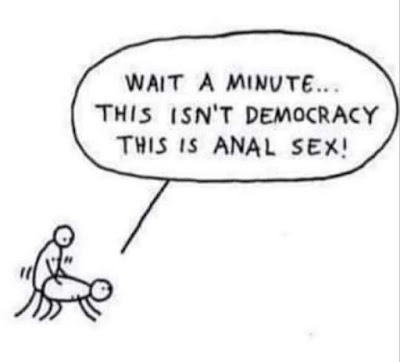 Anonymous said…
Wow! That hurt, as well it should! Exceptional work so thank you. Going to read it again!
6:22 PM

Anonymous said…
You are a brilliant thinker!
5:09 PM