On Friday March 22nd at 5pm ET Robert Mueller handed his Special Councel report on the "Russia Probe" to AG Barr and a gigantic pinata that had been crammed with goodies since late July 2016 is about to get ripped open scattering sweets and sours all over Washington DC. Everyone is still wide eyed at the spectacle of the moment after so many months years of anticipation and frozen with shock and awe that a document costing approx. $35k per page is going fall to the ground in a thousand pieces to be picked over by political operatives and journalists for the next 18 months. This thing is only 2/3rds over folks and we've got a lot more "Mueller Time" and "Russia Probe" in our future so it's time to get serious because now is when the fighting really starts. Vox did a nice job of explaining what the Left expected from the report but didn't get (yet). Over at the Conservative Treehouse sundance lays it all out w/timeline and makes the point that there was never any Russian "collusion" with the Trump campaign that could have swung the 2016 election and that Meuller's team knew it because the Special Councel was populated with all of the same Justice Scum in the "original Crossfire Hurricane investigative team" who initiated the play in 2015. It was a witch hunt from the start with the express purpose of NOT finding the real witch as detailed in KOTCB Witch Hunt. There was never any Russian collusion and, if you think about it, even if there was Mueller would have never been able to call it out this late in the game as was explained in KOTCB Get Ready Russia. Can you imagine the headlines?

Today Special counsel Robert Mueller revealed that Vladimir Putin has been running the United States of America for the past two years using Donald Trump as a blackmailed proxy . In an astounding 800 page document this crack team of former FBI investigators and DOJ lawyers explain in excruciating detail how the Trump campaign partnered with The Kremlin to brainwash the American public and prevent Hillary Clinton from becoming president simply because Putin hated her so much. When asked why it took nearly 22 months to deliver this terrible news to the Justice Department Attorney General William Barr explained that "Mr. Mueller is a consummate professional and he wanted to have all his i's dotted and t's crossed before submitting the final report." When pressed by reporters to explain how the team that comprised the Special Councel justified the delay all the while knowing that a hostile foreign power was in control of Americas international relations, domestic agenda and nuclear codes the Attorney General shrugged, "I guess Bob Mueller was satisfied with the job Putin was doing."

Oh yeah, that's the way it was supposed to have gone down with CNN and MSLSD poppin' corks and splashing Veuve Clicquot on their T&A while the Dems on Hamburger  Hill draft up their impeachment of the Clown Shark. Collusion was so obvious to everyone "in the know" and the Russians are so ham-fisted when it comes to espionage that it's easy to expose their tactics and plans. They're not as refined as the British, French, Chinese, Japanese, Saudi, Israeli, Argentinian, South Korean, Canadian, Mexican or Swiss spies who slither around the Swamp paying people off and twisting arms to get their way. Most Americans have no idea what goes on socially in our nation's capital where players hobnob at social clubs, embassy parties, art galleries, sporting events and power lunch gatherings around town. These places are crawling with foreigners colluding their asses off with politicians, lobbyists and other power brokers operating inside the beltway. The biggest joke surrounding the entire Russian Collusion Witch Hunt Hoax perpetrated on the American (and International) news consumer is that Donald Trump is probably the least connected, and therefore least compromised, politician in the Federal Government. The proposition that Putin was able to get Trump elected POTUS is the longest long shot bet of all time and would be a feat of international espionage unequaled in the annals of history. If Putin was able to outwit Brennan and Clapper and Comey + all the other IC Deep State spooks charged with keeping someone like DJT out of the Oval Office and forced them to collectively eat a gigantic poop pie then "I'll tip my hat to the new constitution" and give the devil his due.

But I suspect that Putin was much more familiar with HRC and her husband, The Great Stain Maker, than he was with the Elvis from Queens. Whitehaven House is just one mile away from the Russian Embassy and that's a 20 minute walk up Wisconsin Ave. so getting together was very easy for Hitlery and her Stalinist friends. I have little doubt that Putin was willing to create the dossier and play along as a hedge because, let's face it, having Trump thumbing through the nuclear codes is frigg'n scary and you've got to have a contingency plan just in case the man actually pulled it off and won the election. In fact, I believe USA IC worked closely with the Russian IC to manufacture this "collusion" story and that Putin's decision to pull out of the conspiracy at the Helsinki Summit effectively ended all possibility of removing Trump from office by nefarious means (see KOTCB Getting past it (some more) and KOTCB No More Games). So Mueller and the Crossfire Hurricane team were left with no option but to stuff their report with as much juicy bits as they could possibly discover and then hang it on a branch and let the blindfolded fools start swinging at it with sticks and bats. It might be empty - often the Blue Donkey holds no treasure, just empty promise. But my suspicion is that many, many strange and enticing facts are contained in the Mueller Report and the first few nuggets should leak out soon which will entice the blind to swing harder and more frantically until eventually the entire treasure trove comes crashing down and the mellay of #FakeNews reporting errups. It will be a spectacle of stupidity, accusation and recrimination with no effect on the MAGA agenda except as a useful diversion to #Occupy the Reality Based Community of SJW's and #NeverTrumpers who can't see what's right in front of their face.

This Special Councel was a ridiculous diversion from the start. It never would have happened if Trump had not fired Comey and Trump DIDN"T NEED TO FIRE COMEY!!! The Machiavellian FBI Director got bounced so that a Special Prosecutor could be appointed and the entire team from FBI and Justice (Crossfire Hurricane) could be moved out of their jobs in the Federal Government. Now that the report has, at long last, been delivered it's time for the investigators to be investigated and their treasonous crimes exposed. 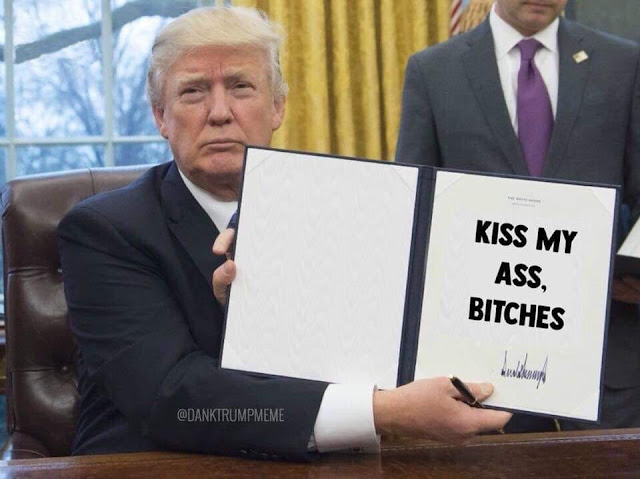 MrWhiteChocolateChasT said…
You don't understand this blog. I am not the clown. I am the Keeper of the Clown Bell which I ring loudly and often to expose the clowns all around us. Isn't it rich?
Ring, ring, ring...
You are a stupid clown. Now read this blog post again - from the top - and keep reading it until you understand what it's saying.
You're welcome.
2:59 PM