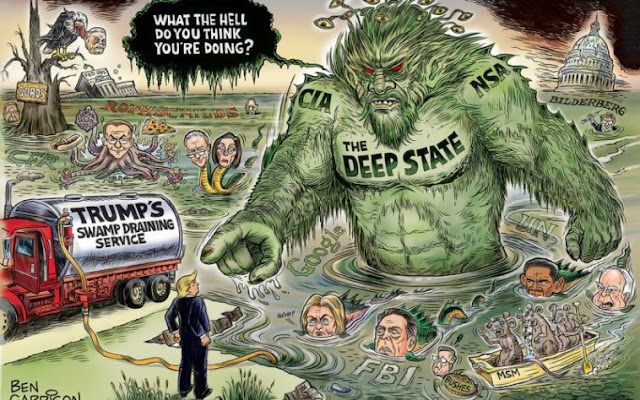 Now, at long last, that we're on the brink of war with Russia after pussy-footing around the issue since 1945, it's probably a good time to take a long look at the Russian Collusion accusations leveled against Donald J Trump's campaign for president and the ongoing special council investigation of the same lead by former FBI chief Robert Mueller. It's not that our impending hot war with the Bear isn't more important (IT IS!!!) than an extra-constitutional dirt-dig that started May 17, 2017 (coming up on a year now) but these pressing events force one, long unasked, question to be answered - and I mean answered right now!

To get to the question at hand I first want to review what's actually speculated upon in the #FakeNews media and broader commentariat across the fruited plain and that namely is this: That the Russian government installed Donald Trump as President of the United States by "hacking" the US election and that, as a result, Vladimir Putin has been running the U. S. A. for the past 446 days. That's a full 14 months that a foreign government has been in total control of the Executive Branch of government, calling the shots, filling thousands of open positions, failing with health care reform, lowering taxes, bombing Syria, Iraq and Afghanistan, confronting North Korea, trying to build a wall, instituting tariffs on China, tweeting about Arnold Schwarzenegger and making the economy go boom (in a good way). So you might think my question is, what is Putin up to? But that's not my question because I don't think he has an answer:


“The situation in the world is increasingly chaotic,” Putin said. “Nevertheless, we hope that common sense will prevail in the end and that international relations will become more constructive — that the whole global system will become more stable and predictable.”

"Hope?" Vlad, that was last terms POTUS. You Russians "hope that common sense will prevail?" What the hell are you talking about? According to the FBI and Justice Department there's a chance (more than a chance) that you're the puppet master of our Commander in Chief. So much of a chance that they've tapped a respected prosecutor and top of the top law enforcement officer to find out if you are, in fact, running one of the greatest - no, the absolute greatest of all time - espionage schemes ever devised. They absolutely believe that you met with and plotted and executed a strategy to install The Elvis from Queens behind the Resolute Desk with his finger on the nuclear button and the full power of the presidency to use at your whim. If Vladimir Putin pulled this off, honestly, my hat's off to him because it's an incredible achievement and, it must be said, the day to day life here in America is pretty damn good so some level of thanks or gratitude should be extended to our Russian masters. But that gets to the question I have for Bob Mueller and Jeff Sessions and everyone at the FBI, DOJ, FISA Court and other authorities riding this case.

What if it's all true?

I mean, what if Putin's KGB did brain wash Trump in the 80's and groom him for the presidency. First the Czechoslovakian wife, and later the Slovenian beauty turned FLOTUS - both from countries shrouded behind the Iron Curtain. Lend the Yankee RE developer some rubles and get him sucked in to your web of intrigue and double-dealing then threaten his children. Set him up with some hookers on a Black Sea boondoggle and capture it on video - just start turning the screws. Soon he's putty in your hands. You say "jump" and he asks "how high?" What then? Like I said earlier, I want to know what you are going to do about it right now. Today. This instant.

I'm not on the "Fire Robert Mueller" bandwagon because I kind of like the man and, in a saner world, he would be an excellent candidate for President of the United States. Mueller has a very compelling personal history and record of extraordinary achievement and regardless of partisan politics the spectacle of this man being defamed and slandered is sickening. Also, Mueller didn't start this thing - Obama and his DOJ/FBI did way back in July of 2016 - so he's simply tasked with cleaning up the mess somebody else made. But if Mueller or anyone close to this case with inside knowledge of the truth is sitting back and letting Vladimir Putin run the Land of the Free through a Trump proxy for almost a year and a half then heads should roll straight down the National Mall and into the Potomac River. How can you just sit there, "investigating" endlessly, while our nation has been taken over by a hostile state? Isn't it kind of a big deal that a Russian stooge is running the most powerful nation on earth?

No, it's not a big deal. It's not even remotely true except in one respect and that is that the Democrat party knew that Putin would not back HRC because they had asked for his assistance leading up to the election and he said "Nyet." This was explained over a year ago in KOTCB Witch Hunt. This refusal of Russian assistance initiated the ridiculous farce America is living through right now as detailed in KOTCB Plan D. So Comey got the swift kick in the ass (deservedly) as punishment gleefully reported in KOTCB Authentic Luxury. And no one will admit that the real crime here is the one committed by the past administration when they opened an espionage investigation on their political opponent a few days after he secured his parties nomination - see KOTCB Did you get the memo.

Anonymous said…
So RIGHT ON!!!!! You are very funny. Your blog is hilarious!!! And everything you say is true. Keep up the good work!
12:08 PM