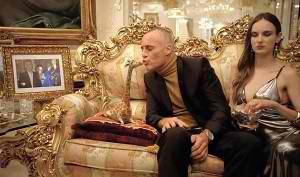 According to Goldman Sachs something called "authenticity" is the new luxury and people who care about such things will go to extraordinary lengths to experience the real deal. Out with the gold and wood finish and in with the open space "reality" that people demand - they're asking to eat in the kitchen for Christ's sake! What the high net worth individual is looking for can't be purchased but needs to be experienced and that's because authenticity is something you feel - you know it when you see it but if you don't see it then it's just not there. Hell, you can hardly even talk about it because there are no words to define it and even if there were you couldn't put that authenticity into any sentence or paragraph without loosing it in translation.

With a name like Metrick you can bet he's able to measure authentic luxury down to the millimeter but I'm just not so sure that GS is reading the runes correctly because they certainly are not seeing the same things I am. Is Donald Trump authentic? There are a lot of contradictory answers to that question and while some people say yes others say no and still others say it doesn't matter. For the sake of this argument let's posit the answer as yes and contemplate how deeply the luxury lovers in America (and around the world) HATE Trump's authenticity. They do not like it one bit and are searching high and low to find an escape from the Trumpian world they find themselves living in. Back in Obama's first term (2010) there was a different mood with regards to luxury (and Russians) so you can see that opinions do change on these matters depending on world events and politics.

But that's all red pill/blue pill speculation so lets take the Huw Pill and examine the French Election results. On one side you've got about as authentic a French woman as is possible to conceive running against a cipher with no platform, no party and no country - and authenticity gets crushed at the polls as predicted:

Perhaps authenticity really is a luxury that few can afford - that few even want. How else do you explain a chap like James Comey and his rise to power, then abuse of that power with no consequence (until yesterday)? I'm not going to rehash all the missteps, lies, subterfuge and conspiracy this guy has been involved in over the past year - I'm just going to focus on his recent statement regarding Obama "tapping" the phones at Trump Tower during the 2016 presidential campaign and during the transition post election (see image left). "I have no information that supports those tweets" is about the most inauthentic answer an FBI director could give on the subject and it's that kind of mush that needs to be purged from the justice department. First of all, as FBI director he knows, yes or no, weather there was surveillance of Trump and his associates. Period. He knows the answer is yes because HE OPENED UP AN INVESTIGATION on Trump a few days after the Elvis from Queens secured the GOP nomination. No one on the committee was asking Comey to "support those tweets" - they were asking him if Trump was spied on by the justice department and if the FBI did the legwork to gather damaging intel and spread it throughout multiple government agencies. As it happens, I know some NSA/covert operations Swamp People who have assured me that leaks to WaPO and the NYTimes came right out of the FBI and though it took the Trump loyalists a few weeks to discover who the culprits were they surly did and confronted Comey with the facts. That started a spy war that has been raging for the past two months in DC as careerists (like Comey) try to hold their power position and threaten presidential impeachment while team Trump finds the bad actors and fires them, deports them or kills them. Why didn't Trump fire Comey on Jan. 20th? Because he needed to USE him and monitor his hostile schemes to track down his operatives within the FBI and squelch them. Comey didn't tell the truth and that is a luxury we can't afford and don't want any more even if we could.