Are there other people, I would imagine, like Doug Schoen?

October 30, 2016
Yes. There are other people like Doug Schoen. Not a lot of them, but they do number in the thousands, and those people are RATs and DemocrATs fleeing a sinking ship - looking for some flotsam and jetsam to cling too and keep themselves out of the roiling sea and mighty waves that would drown them.


It's over folks. And much of what's happened over the past few weeks makes a lot more sense now that the Democrats have thrown HRC under the bus (or 18-wheeler as Donna Brazile calls it). The early voting started in ernest about two weeks ago and the returns started to trickle in and so by mid October the people with access to the results realized that Trump was winning, or at the very least he had a good chance of winning. Jesus! skew the poll results, get a full court media press on this guy and talk him down, down, down. Suppress the frigg'n Trump vote through any means possible and let's see how it looks on Halloween. So they pulled out the stops and laid it on thick - election over you fine subjects, move along...

IT nerd walks down a long, dimly lit hallway at the NSA, and into a room full of computer scientists.
He holds up his tablet and gives the bad news. "It's October 25th and we've collected an excellent sample from several critical swing states including Pennsylvania, Iowa and Ohio and we've concluded that Donald Trump has a 100% probability of winning the general election. There is no way for Hillary Clinton to win." Grumbling long faced scientists look around at each other, "who wants to call POTUS?" That must have been one hell of a phone conversation, but what to do - are we going to just sit back and let this thing play out - Her supporters and the media (same thing) will be shocked and disillusioned. Something must be done to soften the blow - an excuse. 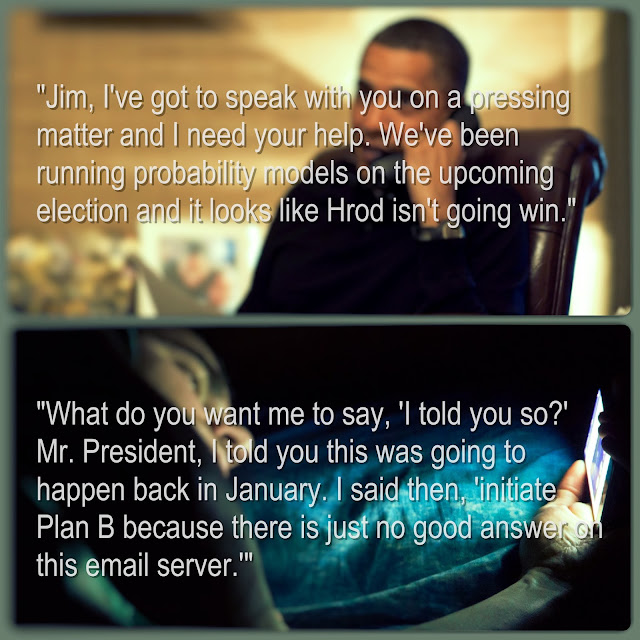 James Comey: (sleepy) Hello, this is Comey
POTUS: Jim, I've got to speak with you on a pressing matter and I need your help. We've been running probability models on the upcoming election and it looks like Hrod isn't going win.
James Comey: What do you want me to say, "I told you so?" Mr. President, I told you this was going to happen back in January. I said then, "initiate Plan B because there is just no good answer on this email server."
POTUS: I know, I know and you were right Jim, but she had me by the balls and I couldn't think of any way... She had the DNC wired and all her media flunkies... we tried to push Joe as an alternative but they wouldn't have it.
James Comey: Great. Well, you sure have made me look the fool. All my best agents are resigning and I get nagged every night by my wife. And all for nothing. At least it will be over soon.
POTUS: Well, that's what I'm calling about Jim. I've got one more favor you need to do for me.
James Comey: (long pause) I'm listening sir.
POTUS: I need you to initiate Plan C.
James Comey: (agitated) Mr. President we are a little over a week away from the election! We can't run with Plan C - I'll look like an absolute fool and everyone will claim that I'm fixing the election. She'll go down in flames and I'll be the villain.
POTUS: Jim, think about it, we can't let Trump win this thing far and square or he'll limo up to capital hill with a national mandate. We've got to sabotage this election now and take our lumps. Make sure the press push the message that Trump never would have won except for the fact that Hilary had the whole email server opened up on her again. Do you have anything you can use to reopen the case.
James Comey: (laughing) Are you kidding me? I've got so much dirt on these people I don't even know where to start. I've got the Clinton Foundation mother load, but you're all in that so... then I've got all this stuff on McAuliffe, what a dirtbag... and then, get this, last week my guys investigating Weiner for child porn found all of Hillary's emails copied onto Weiner's laptop.
POTUS: What the...?
James Comey: Yep, got it all boss. It appears that some IT tech flipped an auto backup switch in the home server software that replicated the info on Huma's laptop onto the server, which she wiped, but also onto her husbands laptop. They didn't even know it was happening and they still don't know. It's hilarious.
POTUS: That's good, very good so use that one. Steer clear of the Clinton Foundation and McAuliffe because they'll bring everyone down with them. But everyone hates Weiner and will assume the worst. We'll drone her tomorrow, so make the announcement while she's in the air flying out west. That will give it an hour or two for the story to spread before she can respond. Thanks Jim, you've been great about all of this.
James Comey: I'll do it sir, and I really hope it works because I have some serious issues with regards to Plan D.