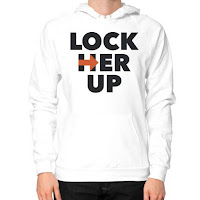 When this whole election is over and the blood has been mopped up someone is going to have to subpoena the early voting records from every state up to Oct. 27th and determine who was leading - especially in the battle ground states - My guess is that it's Donald J. Trump, The Elvis from Queens who will be far, far ahead in the tally. So far ahead that it would be easy to extrapolate a Trump victory on November 8th for anyone familiar with probability modeling and AI prognosticating. It is the only rational explanation for why the FBI would reopen its investigation of HRC and her criminal use of a private email server for government/private business. This thing stinks to high heaven and it shows a corrupt and vile justice department tampering with the electoral process.
The DOJ has given Hitlery the pass for 20 months and now, with a week to go, they reopen a closed case because of something they found on Huma's electronic devise while investigating Carlos Danger and his passion for sexting young girls.


Federal law enforcement officials said Friday that the new emails uncovered in the closed investigation into Hillary Clinton’s use of a private email server were discovered after the F.B.I. seized electronic devices belonging to Huma Abedin, a top aide to Mrs. Clinton, and her husband, Anthony Weiner.

When did the Feds discover these emails? Yesterday? Come on America, this is truly outrageous and points to deep corruption and subterfuge.  Talk about a rigged system!!! They've done everything they can think of to take Trump out (short of actually killing him) and now that they know he's going to win they've decided to sandbag him by taking out his competitor (THEIR OWN CANDIDATE) to de-legitimize the election and Trumps victory. The only way to fight back is to show that insiders saw the writing on the wall and sabotaged HRC because she couldn't win and they want a muddy mandate for Trump.

[Post Election Update] Now that it's all over it's obvious that I was right about this as HRC herself is blaming the FBI for her loss. Plan C worked just as expected - cold comfort for all of those who were "With Her" but still very useful as an excuse.