January 31, 2016
Back in the early days of the commercial Internet (1998) an interesting business strategy book titled Unleashing the Killer App: Digital Strategies for Market Dominance by Larry Downs and Chunka Mui hit the market. Filled with good ideas and interesting observations about technological change and it's effects on business and society as a whole I would still recommend it today - especially for those youngsters who are wondering what bright bulbs were thinking the impact of IT and the networked world would be on our lives in the near future (which is coming to an end). One of the  observations, sighted early in the book, is that lowly e-mail is a "killer app" with adoption so fast and pervasive that it effectively killed it's major competitor - a 200 year old monopoly called the postal service. As proof they sight congressional testimony from then US Postmaster General who complained mightily about the "electronic bypass" that allowed people to send communications, letters, contracts and other "e-documents" outside the traditional delivery system (i.e snail mail).

The electronic bypass is a problem and opens up a pandoras box of ethical challenges for everyone from stock brokers to terrorist to cheating spouses to the Secretary of State. I've got no idea what the truth is behind the HRC email scandal that's been playing out since the NYTimes first ran the story almost a year ago, but I'm absolutely sure of one thing and that is that no functioning enterprise would allow a senior officer to set up their own private email server to conduct company business with no audit trail and no frigg'n idea what was going in or coming out of said server. If a Sr. VP at a bank, retailer, oil company, IT enterprise or you name it - Whatever company you can think of - set up a private server and conducted all their personal and professional communications through it then that Sr. VP would be 1. fired, immediately and 2. prosecuted, vigorously. The only plausible excuse for setting up clintonmail.com would be as a tool for trolling the Russians, Chinese and Iranians who were most certainly reading everything that was on it. Otherwise it was reckless, duplicitous and illegal to use this electronic bypass for official US Government business.

The fact that the Government - State, DOJ and the FBI (that's just the executive) along with Congress and the courts - have not gotten to the bottom of it and that it's been 11 months with no resolution is unacceptable. It shows the Federal government to be either 1. inept or 2. corrupt beyond redemption. I guess the killer app has finally met its match. 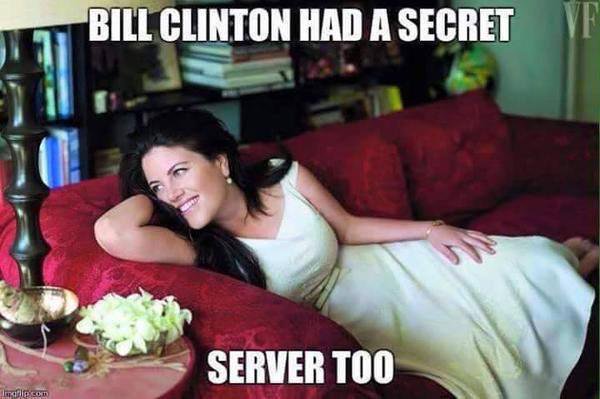