On May 29, 2019 "Arnav Gupta, of Bethesda, Md., erupted into a bright orange fireball at the Ellipse, a tourist-filled 52-acre public park that sits north of the Washington Monument, around 12:20 p.m. Wednesday." This occurred approximately one hour after Special Counsel Robert Mueller erupted into a bright orange fireball at a hastily convened press conference where the Preppy, war hero, lawyer, G-man and former FBI boss petulantly threw his report in the air and slammed the back door on his way out saying, "Now, I hope and expect this to be the only time that I will speak to you in this manner. I am making that decision myself. No one has told me whether I can or should testify or speak further about this matter... the report is my testimony." Sadly for Mr. Mueller there were no park police present to "put him out", so to speak, with fire extinguishers so America just had to sit back and watch him (and his supporters in the #FakeNews) burn baby, burn.

It was quite a show and while Mueller had the perfect opportunity to hammer the final nails in the "Russian Collusion" coffin and bury this absurd conspiracy theory so deep in the ground that only an act of God would resurrect it he decided to spontaneously combust on national TV instead. Pretty spectacular and mind-numbingly stupid at the same time because it set in motion the inevitable impeachment of Donald J Trump. WaPo claims that impeachment isn't an easy decision for the Democrats and separates the squabbling politicians into three competing factions:
The waverers and skeptics have some lame, speculative reasons for dithering on the impeachment question but the die-hards have one big hard boner of a reason that will force the Donkeys and a goodly number of Pachyderms to pull the trigger and light this mutherfucker up.

The most staunch anti-Trump Democrats are ready to charge into the impeachment battle, almost all fully cognizant that it might not make the most political sense and the odds are stacked heavily against their actually ousting the president.

But they are facing history’s judgment.

Yes, history's judgment is harsh and long lasting and does not arch toward justice or any other thing the Leftist demagogues claim including the ability to "get on the right side of" it. History is NOT written by the winners and most of it is poorly recorded and misreported events chronicled by nerds and losers who don't even understand how thing work or why decisions are made. As Henry Ford said (or is recorded as saying by the historians) "history is bunk" which is, as you might suspect, not exactly what the great American said: 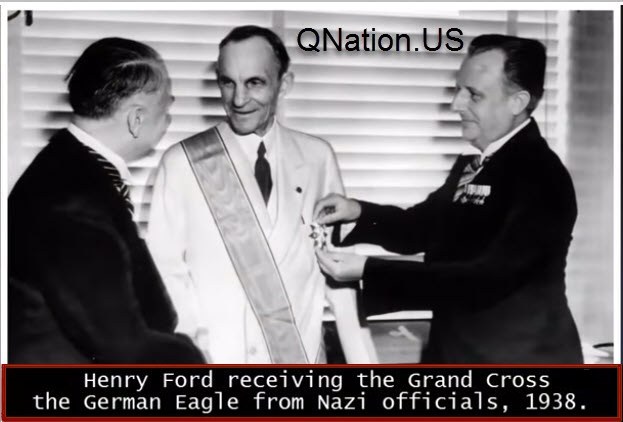 Set in its proper context the sentiment expressed by Mr. Ford makes a lot of sense to an unfolding Progressive vision of America and the world. He gave expression to this worldview in the newspaper he bought and published, The Dearborn Independent, which distributed #FakeNews far beyond the small Michigan town and influenced global movements leading to societal collapse and war. History's judgment has been pretty muted with regards to Henry Ford's anti semitism and I don't see SJW's or other do-gooder activists demanding boycotts or name/statue removal of a man who significantly influence Hitler - that's right, I said Hitler - and justified the liquidation or exile of almost all European Jews. I guess it all depends on who writes the history and what gets published and distributed, reviewed, championed and believed which means "the history we make today" is what counts and Bob Mueller knows that too.


To see what's happening it's important to clear the mind of any traditional notion of political parties, sides of the contest, teams, Liberal vs. Conservative, Left vs. Right or Good and Evil. Mueller was a registered Republican - big fucking deal - because in Washington DC that doesn't mean anything and unless you live and work there it might not be obvious that establishment men that comprise the administrative state don't concern themselves with party platforms or political ideology. They're focus is on power, control and stability to keep "their people" in Ivy League schools, Martha's Vineyard summer homes and romantic getaways to the south of France. Also, they want to maintain active small wars around the world indefinitely while preventing a nuclear war from breaking out between hostile nations (or by mistake). Since 1932 that affluence and stability has been secured by the FDR New Deal Liberal Democracy which has been to ruling paradyme of the past 80 years. It was dying and the choice had to be made - should We the People reanimate this creature with a Obama/Hitlery blood transfusion or kill it and Make America Great Again? The #MAGA choice won out but the beast refuses to die and if you need proof just take a look at the (D) frontrunner who (as he would say) "literally" looks like a walking corps.

Pathetic, right? I know, I know but here's the thing, the other guys in the primary battle ARE EVEN WORSE!

Nothing to see here. Just @PeteButtigieg pandering to blacks by breaking the law and drinking in public. “Maybe if I do something illegal, blacks will think I’m one of them!” pic.twitter.com/qO9MHFq5Z1
— Jon Miller (@MillerStream) June 9, 2019

2016 was a sea change election, the power of incumbency makes it impossible to defeat Trump in a free and fair election and the Democrats don't have a candidate currently running who is capable of leading the country even if they did win. They can't assassinate the POTUS (though they've probably tired) and he's not going to leave office on his feet so there really is only one option left and that means impeachment is a political imperative.  They are going to impeach (and by "they" I don't mean Fat Jerry Nadler or Nervous Nancy Pelosi) because the prospect of Trump having a clean shot at 2020 and four (4) unobstructed years of leading the USA will fundamentally transform this country and take away their power. That's why they #Resist. That's why they want to #ImpeachDonaldTrumpNOW. There is no tomorrow and yesterday the "Justice Dept. Agrees to Turn Over Key Mueller Evidence to House" so that an impeachment investigation can proceed and the formalities can be observed. That is the history we're making today and it's not worth a tinker's damn - it's bunk.

Democrats have vowed to hold Mr. Trump accountable for the misdeeds uncovered by Mr. Mueller, but they have been stuck in neutral for weeks amid a standoff with the Trump administration over documents and witnesses that they say they need to bring Mr. Mueller’s 448-page report alive for American voters.

What manner of witness might bring the whole sordid obstruction of justice non-indictments detailed in the Mueller Report "alive for the American voters?" A slithering serpent named John Dean who played a crucial role in the drama the last time the powers that be in Washington DC forced a President from office in a silent coup. A gigantic Clown Pill shoved down Americas throat with no purpose but to show the world how shameless and disgusting the establishment is prepared to act in defense of their lofty position.


Can’t believe they are bringing in John Dean, the disgraced Nixon White House Counsel who is a paid CNN contributor. No Collusion - No Obstruction! Democrats just want a do-over which they’ll never get!
— Donald J. Trump (@realDonaldTrump) June 10, 2019

No. They don't want a do over. Historically the Democrats proceed along a very clear path - if they don't like the rules of the game and the emperor they will attempt impeachment. Failing that they will attempt (and sometimes succeed) an assassination. If that doesn't work they will resort to civil strife and violence and if that doesn't get them what they desire they will secede and engage in civil war. If none of this works they will destroy the country rather than submit to another parties rule. We are very early on in our national dark journey of the soul and impeachment is our first stop along the winding road.