If you're a 💩 it's a 😢 and 😠 game when the 🌎 deals you a 🃏 and his politics 🔀 and 💯% MAGA pro💗, pro 🙏 and pro 🔫. It' might even make you 😱. That happened last week when Kanye West visited the OO and spoke with his creator about current events and possible solutions for national problems like violence, mass incarceration and his love for Trump. The usual suspects flipped out (of course) but no matter how hard they tried to dismiss Ye they couldn't erase the visual of Mr. Brown and Mr. West kick'n back and rapp'n it out with The Elvis from Queens. Nor could the NPC's process the message Kanye delivered loud and clear:

"It was something about when I put this hat on. ... It made me feel like Superman. That's my favorite superhero. And you made a Superman cape for me."

Be a Superman, put a cap on and fly. Slave morality runs deep in the SJW and their professoriate so Kanye must to be destroyed even if it meant digging up the bones of Leonard Cohen (the "real" Kanye) and publishing his drivel. Ye's friend and collaborator and fabulous rapper TI (who knows a thing or two about women) was compelled to stoop to "Trump-level misogyny" by denigrating our beautiful FLOTUS in a music video to punch back at Trump for having the temerity to invite his "illiterate negro" friend to a minstrelsy and give him 10 minutes of airtime which was broadcast worldwide to a billion people. Kanye looked into the abyss and the abyss looked right back at him - he confronts the dragon and finds his father. Just another day Making America Great Again.

The KOTCB blog is a proponent of the idea that Donald J. Trump is America's First Woman President or FWPOTUS (see Women's Day 2017) and I know this runs counter to the popular War on Women, misogynistic messages the Donald is often accused of formulating out of his pig headed masculinity but any honest appraisal of his speech patterns, method of argument and insults must acknowledge that they come from his feminine side. The left keeps on throwing women at him to attack and discredit his patriarchal fascism and (s)he cuts them to ribbons like a cunning, wise and ruthlessly honest old grandma (which is exactly what he is). Look at what he did with Crooked Hitlery. She still can't figure it out, but it's only because she can't imagine that a man like Trump could out bitch Her. The Dems threw Sen. Dianne Feinstein into the lioness's den and she was eaten alive (slowly) and she, just like HRC, refuses to accept the results of her catfight. They'll never learn -  over the past week they've been schooled repeatedly but my guess is they haven't seen the light and I'm hesitant to even write this blog post because I hope they never do (but they won't believe me so..).

On Sunday #FakeNews "60 Minutes" tried to sandbag Trump with Lesley Stahl and used all the Don Hewitt editing tricks to paint an unflattering picture of the man but couldn't erase the impression that we were watching two women arguing about policy over lunch at The Palm. He enjoys the bickering, “I mean—I’m not a baby. I know these things” and he argues (if you can call it that) just like a woman.

Not convinced? Imagine, if you can, the plight of Elizabeth Warren the fake Indian Senator from Mass. who used her Native American ethnicity to game the HR hiring dictates at Harvard Law School and for years was exposed and lambasted for it by the 250,000 readers of the American Spectator. It was Warren's well known and despicable exploitation of Affirmative Action loop-holes to secure a job at Harvard that incensed the vast right wing conspiracy but had zero traction with the #FakeNews media or the deep pool of low information voters who decide winners and losers in elections. Then Trump nicknamed her ‘Pocahontas’ and forced every media outlet in America to discuss the story because he's a racist(?) and she's... she's... she's a fake Indian. Trump didn't stop using the name (he'll never stop) even after he was called insensitive and rude and racist so Warren found herself walking the trail of tears out of 2020 contention and was forced to take a stand by getting her DNA tested. The results were announced on Monday along with a high production value advertisement celebrating her "victory" in proving that she is, in fact, a white woman. She fell in the same trap that Trump set for Obama with the "Birther Controversy" that proved BHO grew up in Hawaii and Indonesia (not what the Founding Fathers had in mind for anyone endeavoring to lead our country). And when The Elvis from Queens was asked to respond to the news that 'Pocahontas’ did prove that her great-great-great-great-grandfather might have been an Indian he says, “Who cares?” Wow - just wow! How many men have experienced this scenario with their girlfriend or wife or mother where the accusation of some failing or mistake is harped on for years, spoken about at cocktail parties and over dinner with friends and generally spread broadly throughout their social circle with no easy defense for the accused until finally at great expense and effort the transgression is examined - the lost earring is found, the true culprit who scratched the car is discovered or proof that the bill was actually paid 6 months ago is produced - and that woman who's been twisting his nuts (with glee) looks at him and says, "Who cares?" Good question and the answer came in a cringeworthy thread of 20-plus insane tweets tapped out by the Senator from Massachusetts on the evening of her DNA announcement once the magnitude of her blunder started to sink in to her deep blue brain.

Otero, who was appointed to the court by President George W. Bush, had indicated during a late-September hearing that he was skeptical of Daniels’s claim on free-speech grounds. He said Monday that Daniels has presented herself as Trump’s “political adversary” in public and in court filings and that Trump has the right to respond to her claims.

“If this Court were to prevent Mr. Trump from engaging in this type of ‘rhetorical hyperbole’ against a political adversary, it would significantly hamper the office of the President,” Otero wrote.


“Any strongly-worded response by a president to another politician or public figure could constitute an action for defamation. This would deprive this country of the ‘discourse’ common to the political process,” he wrote.

And how does our FWPOTUS respond to this ruling that clears him of defamation? What kind of "rhetorical hyperbole' might Trump use in 'discourse' with his political adversaries? He calls the low down lady "Horseface" and describes the lawyer as "3rd rate" in an act of psychic defamation that will haunt Stormy Daniels for the rest of her natural life because I don't think she'll every be able to make a public appearance on TV or at a strip club without anyone watching thinking Horseface.


This is one time when I'm in total agreement with the lisping Cornhusker because calling a woman Horseface is NOT how men act - certainly not in public and, to be honest, not really in private either if I limit myself to heterosexual men just hanging out, playing ball, fishing or whatever. No, men don't label a tramp Horseface to humiliate her and crush her effectiveness but women do. Women do it all the time - Horseface and a thousand other comments and slights in the never ending war of status with their sisters. I'd go so far as to say that only a witty homosexual or a woman could come up with an insult so devastating and on the mark and since we know that Trump isn't a homosexual, by process of elimination, he must be a woman. 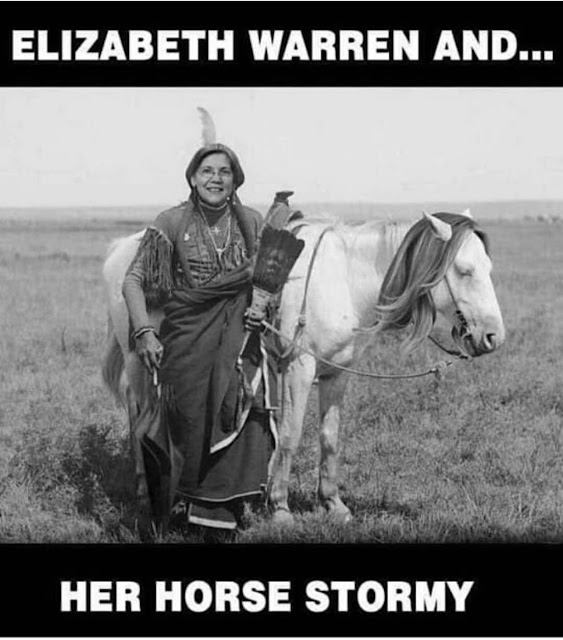 The liberals and the Democrats and the #NeverTrump GOP turds think they're in the grips of some Hitler/Stalin authoritarian "man's man" and constantly throw women - Hilary, Warren, Dianne,  Stromy, Carly, Nikki, Ben, etc. - into the arena to show the world his white male chauvinism. When the girls engage in battle they soon discover that they're combating a creature they're simply not equipped to fight or even defend. They're facing a cross between Joan of Arc and Joan Rivers who beats them at their own game because only a woman can win an argument with a woman.