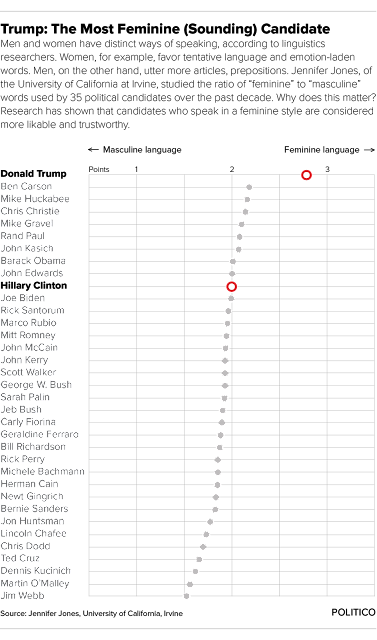 Back when our nation was in the heat of the presidential battle (late October 2016) Politico published what I assumed was a hit piece on Donald J Trump claiming that he spoke like a girl. I didn't pay much attention to it at the time, but I revisited the article today and boy was I wrong because it turns out that Trump's speech patterns and mannerisms are almost off the charts feminine. Look at the graph on the left which I stole from the Politico article and notice just how much of an outlier Trump is on the continuum. Not much of a difference between HRC and JEB! and things don't really start to get overtly masculine until we get to the Biggest Little Hobgoblin in the Union towards the bottom fifth of the list but Trump... Trump is way more feminine (WAY MORE) than Jim Webb is masculine and you would be hard pressed to get more masculine than that. Trump stands alone and far apart from his political rivals and it goes a long way in explaining why the man is so captivating when he talks and why he engenders so much contempt from a certain type of woman. The prod that sent me searching for the Politico article was this incredible story in The Guardian titled "If Trump were a woman: play swaps presidential candidates' genders" which shows a video clip of DJT vs. HRC debate reenactment with a female Elvis from Queens. For anyone who's ever argued with a woman this video clip will feel very familiar and it confirms every point the folks at Politico were alerting us to last fall. Trump is the First Woman POTUS. His “Erratic Behavior”, “emotional maturity [and] stability”, "Purposeful, Vindictive Chaos", "Crippling Envy", "Vainglorious" pronouncements all validate TI's sober warning from last October "I just know that women make rash decisions emotionally — they make very permanent, cemented decisions — and then later, it’s kind of like it didn’t happen, or they didn’t mean for it to happen." Is that not a chief criticism, if not THE PRIMARY CRITICISM, of our current FWPOTUS? It's ironic, but it's now clear that the #NeverTrump, Boys Club Newsroom, Old Bull Capitol Hill and "pro-women" crones are nothing but misogynistic, sexist haters who despise women and every word, gesture and action they take. Shame! Shame on you all. So open your mind to a woman's voice - you just might learn something.