Four Arguments for the Elimination of...

When I returned home from a week at the beach this summer my 10 year old 32" LCD TV was on the fritz. Oh, it still turned on, and the sound worked, I could flip through the channels but the color was whack because the "brightness" was saturating everything on the screen. It was unwatchable, but I watched it anyway because I'm lazy and I mostly keep it on for background noise listening to news or weather reports. After a month of this admittedly poor situation my wife demanded that I do something about it and so, being cheap, I tried to get it repaired. The TV repair shop I patronized for years has closed its doors so I had to visit the TV dealership for a diagnostic examination where I was told that a simple power supply replacement would cost $150 and replacing the board or chips would be $300+ if the discontinued parts could be found. I might as well buy a new one so I did - 43" LED flat as a pancake and light enough to lift with one hand all for $229 and it is now hanging on my wall like a piece of art. 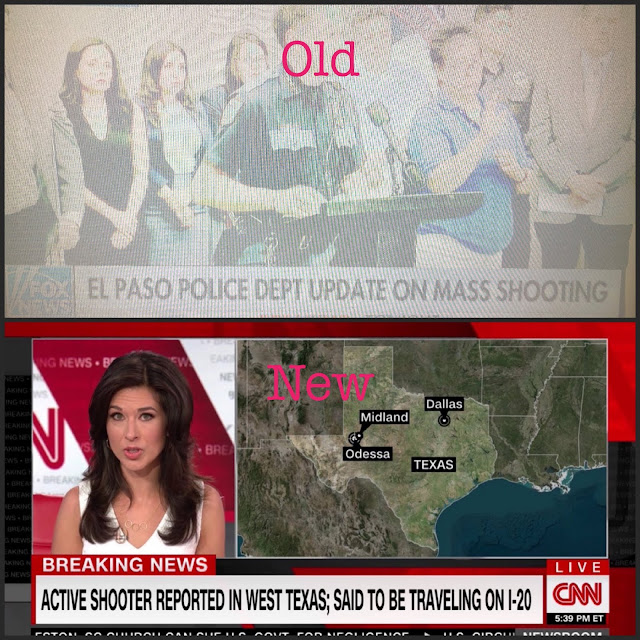 The young man at the electronics store did try and upsell me to a more expensive model with very powerful marketing lingo and complex tech jargon to explain the "true black" characteristics of one screen over the inferior soft lines of a different model. Sometimes the screens would be placed side by side to accentuate the differences in resolution, color, motion tracking, etc. but I'm the worst person in the world to upsell because I grew up with a 20" black and white cathode ray tube shooting lightning bolts in my eyes and illuminating 512 lines of very mushy resolution. As a young man I had to change the channel by getting up off the couch and turning a dial on the box. I had 3 channels of programming on a good day. Today I can buy the cheapest TV on the showroom floor and it's 10,000 times better than anything I ever dreamed of as a young man. A 40" flat screen with unlimited streaming content is more than I will ever need in the way of a Television and this 4K picture (whatever that is) is off the hook!

When I was still watching my "Boob Tube" in the old days one of my favorite transgressive books was “Four Arguments for the Elimination of Television,” by Jerry Mander which argued (convincingly) that television, as a medium of communication, should be, well, eliminated. Abolished. Completely destroyed and abandoned forever. There were four key "arguments" postulated in the book but each broad stroke actually contained hundreds of sub-arguments which, to my mind, were irrefutable and it's a testament to the human impuls for self-destruction that people could read the book and continue subjecting themselves to this demonic device of mass hypnosis. For the purposes of this blog post I'd like to focus on Argument number 4:

The fourth argument demonstrates that television has no democratic potential. The technology itself places absolute limits on what may pass through it. The medium, in effect, chooses its own content from a very narrow field of possibilities. The effect is to drastically confine all human understanding within a rigid channel.

Got that? Television is a kind of Artificial Intelligence that is continually self-selecting what it can broadcast based on what "it" (the AI) already "knows" from the VP of Programming. The "choices" are auto reinforcement and over time the insanity of this isolated mind gets even the people who work for it hearing voices in the middle of the night and hailing taxis (or uber drivers) and screaming "take me to the middle of the George Washington Bridge." It's a Diana Christensen world and you don't live in it, but "it" does live in you. In 1971 Gil Scott-Heron sang "The Revolution Will Not Be Televised" but by 1976 Paddy Chayefsky made a movie about televising the revolution and Howard Beale was assassinated on his 6:00 PM news show. That was two years before Jerry Mander published his indictment of the medium's message and 40 years before the American people finally got MAGA WOKE and realized that Beale wasn't a "madman of the airwaves" (as the #FakeNews claimed) but was telling the truth and got killed for it. The television WAS the revolution and it slowly (corrosively) transformed America from something Great (1957) into whatever it is today which Dave Chappelle: Sticks & Stones meditates upon with hilarious results. 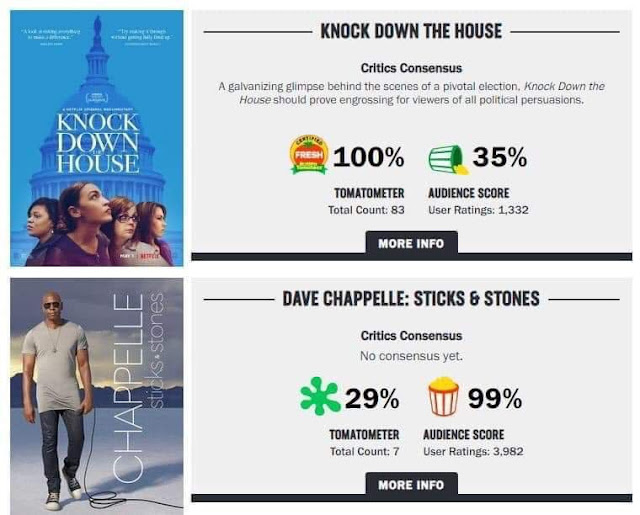 It's amazing how the big brain professional critics praise a love letter to Double Doink while the general audience builds a Wall of Voodoo around the same content. The same scribblers demand that Chappelle observe the fundamental decencies but everyone watching from the reel world sees a modern day Howard Beale telling it like it is. If I were DC I'd be watching my six because this post-revolutionary world is full of SJW Trannies who want to break his bones. He covers so many KOTCB favorites in his one hour diatribe that I'm thinking he might read this blog:


Dave is strong on every topic and though I don't align on every point I'd have to say that, like most of his audience, I'm 99% simpatico and give the show 144 balloons on the KOTCB Scale (highest possible score). If you're short on time then just watch the first two minutes because it's a tasty sample of the socio-cultural rainbow stew the chefs on Madison Ave. and Hollywood cooked up for us. Eat it nigga's.

Impressions:
The Founding Fathers on the US Constitution - It's a joke. Hahaha... no, seriously... hahaha. You can love this joke, as surely any Progressive must, or, like me, you can laugh and shake your head at the lost reverence for the geniuses that designed and formed a government that secured our God given rights but you must admit that this describes the general sentiment across the fruited plain due to television's nefarious influence. Stop talking about the US Constitution because We the People now live in a post-constitutional "democracy" with universal suffrage, a Federal Reserve and a mass hypnotizing machine in almost every living room, bar, airport terminal and shirt pocket in America. The US Constitution is a framework we hang our laws on - if our laws fit these old bones then that's (small g) great, but if they don't fit then... fuck it, you've got to wear them anyway.
The next one's a little harder. Can you guess who it is?
Chappelle: "Duh, der, I'm a dumbass and I'm gonna shit all over your life." - "Who's that?"
Audience: "Trump!" "It's Trump!"
Chappelle: "That's you!"
Yeah, that's you, you post-revolutionary scolds who vote, consume stuff and watch. Fuck you but if you haven't gotten the message than stick around and I'll do this over and over and over again for a full hour. Not since Larry Wilmore KILLED IT at the nerd prom in 2016 has a comedian dropped more truth bombs on the US Revolutionary Guard and boy o' girl do they hate it.

Television was not eliminated. Television's Impact On American Society And Culture has been profound - revolutionary in fact - and because it wasn't eliminated something else had to be eliminated instead. It's harder to name that thing that was destroyed, wiped out and replaced by television. Can you guess what it is?