June 25, 2016
When something catastrophic like Brexit happens I like to take some time and surf the web to the left side of cyberspace and experience the rending of cloth and pulling of hair by the losers. Childish and insensitive of me? I guess so, but it's also hilarious and, in the grand scheme of things, harmless. As luck would have it the Brexit vote happened just a few days before Gay Day when tens of thousands of people world wide go out in the sweltering June heat and march for pride and this year "they’re prouder than ever." So I've been surfing a rainbow sea of IP all morning where the swells are mighty big and I hopped on a cresting wave of agitprop that gave me the best ride of the day. It didn't have anything to do with Brexit explicitly, and yet, if you read between the lines Brexit had everything to do with it. It was an article in The Guardian titled "Too straight, white and corporate: why some queer people are skipping SF Pride" and it's mandatory reading. 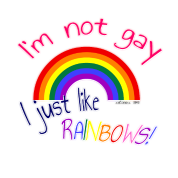 Before I dive into the article let me just say that I've been to my fair share of Gay Pride parades - never on purpose, but having lived in Washington DC, San Francisco and NYC it's almost impossible to avoid the things and it usually happens something like this - I'm rolling out of bed on a Sunday late morning (11AMish) in Adams Morgan or SOMA or SOHO and step outside to grab a coffee + egg sandwich and find myself surrounded by assorted degenerates and queens parading around the neighborhood in exotic (and in some cases terrifying) costume. Wandering up the street to procure my brunch my path is blocked and float after float of transgender lounge singers and Village People impersonators ham it up for the crowd making lewd and explicit gestures to shock and amuse the gawkers. I know that you folks in the suburbs who watch the evening news coverage think the entire festivity consists of politicians locked arm in arm with Harvey Fierstein and New York City Gay Men's Chorus belting out God Bless America but let me assure you that the happy pictures on your 120 second news package represent only the beguiling head of the snake - and the snake is long. Once the politicians and yes men pass the reviewing stand the cameras go off (mercifully) but the show goes on and the show is rated NC-17 at best - or at least that's the way it used to be in the good old days.

The Guardian article is focused on the greatest gay pride parade in the world centered in the gay center of the universe - San Francisco, CA and basically makes the point that it's not much fun anymore.


“Pride really should be for queer folks,” said Amy Sueyoshi, a lifelong San Francisco resident, who identifies as genderqueer. “It’s not for straight people to demonstrate their queer-friendliness. I’d like that they do that in their daily lives.”

Weird, right? Integration (if that's what gay rights activists are striving for) is a two way street - we'll integrate with you and you'll integrate with us. It's the price of "normalizing" yourself, your race, your genderqueer tribe or whatever ostracized group you happen to identify with into the broader, formally intolerant society you inhabit. And one of the unpleasant circumstances of that normalization is that you get "pushed out" - not by intolerance which, strange to say, will let you stay as you are, but by the market that now treats you just like anyone else.


In addition to low-income queer people who can no longer afford to live in San Francisco, queer social justice groups and beloved gay bars have also struggled to stay in the city.
“It’s a shame, because you think about LGBT organizing in San Francisco ... and it’s kind of disappearing little by little,” said Noyola. 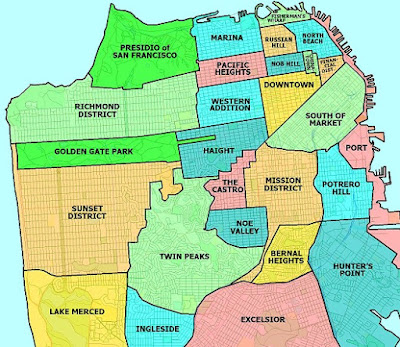 Not really disappearing but like so many other parts of San Francisco the cool part of the city is moving to Oakland. Like it or not, the corporations that sponsor the Gay Pride Parade are creating and economic environment that is transforming the city into something different.


“It just feels like a big Miller Lite tent,” said Birnbaum, 31. “With the corporate floats … it’s co-opting queer identity as a way to make money.”
Instead of attending the formal SF Pride events on Sunday, Birnbaum will be going to an intimate LGBT film festival in a community space six miles south of city hall in an area known as the Bayview – one of the only remaining black neighborhoods in the city.

Bayview is otherwise known as Hunter's Point on the back side of Potrero Hill (now gentrified) home of OJ Simpson and if THAT'S where the queer people are holding their gay film festival these days then, wow, the city has really changed. My point being that the LGTB folks boycotting their own Gay Pride Parade are very similar to the British citizens who voted to pull out of the EU in the Brexit vote last Thursday. The corporate middlemen have ruined it and homogenized a vital experience into dead plastic consumerism. That's true if your talking about a parade or ones national identity and people, quite rightly, will rebel against the empty conformity being foisted upon that which they hold dear.