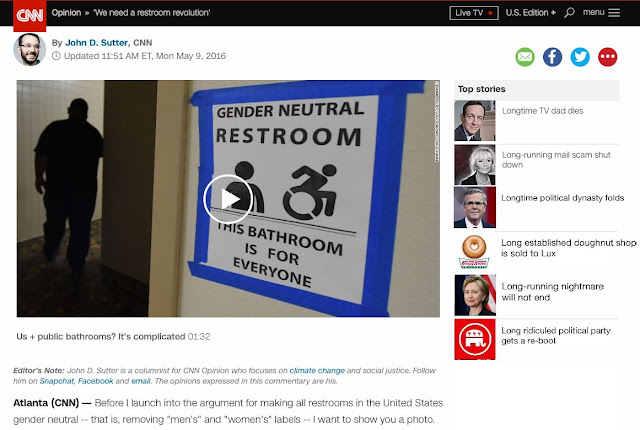 The picture John D. Sutter shows you in his CNN Op-Ed 'We need a restroom revolution' is of trans-rube activist @JayShef and this declaration does not spring from John D. Sutter but from Kathryn Anthony, an architecture professor at the University of Illinois at Urbana-Champaign. What a surprise that an architecture professor wants Federal, State and Local laws enacted to force the redesign of every public toilet in America - I'm sure this justice warrior's aims are purely altruistic. It's received wisdom that under our Federal system of government the 50 States are unique "lavatories of democracy" and while one toilet bowl might be delicately showered with Golden State sweet-pee another might be caked with man poop blacker than a Tar-Heel. Hence the need for a "revolution" that can unify and dictate a nation wide potty policy that is inclusive of transgender folks and getting in the toilet bowl is just the first step in a thousand mile journey:


You might think that allowing a transgender person to use the restroom of their choice is a workable solution. It's a first step. But Sheffield and others who don't conform to gender norms face discrimination even when they're legally allowed to choose which restroom to use.
Seventy percent of transgender people surveyed in Washington, for example, a city with progressive laws allowing people to use either restroom, reported "verbal harassment, assault and being denied access to public restrooms" because of their identities, according to a report from the Williams Institute at the University of California, Los Angeles. Further, 54% reported medical problems "like dehydration, urinary tract infections, kidney infections and other kidney problems" because they avoided using restrooms entirely.

Got that? Even when the law is in their favor with the full force of the US Justice Department backing them these trans-mutant-ninja-turtles still face "verbal harassment" and get pushed around, punched, locked out of bathrooms and generally mistreated. It's so bad that over half of them don't even use the bathroom and willfully choose to live their life full of shit. To solve this bathroom problem we're going to have to go to the source of this intolerance and reprogram some people who don't understand the fluidity of gender identity and consider it odd - even wrong in some primordial biological way.

Like so much else in 21st Century America the toilet (and all that it represents) is taken for granted. They're everywhere and for everyone - clean, efficient, sanitary and free. There was a time when you had to flush the toilet and contemplate the magnitude of Western Civilizations achievement as you watched your excrement sucked down a whirlpool on its journey through miles of pipes to a waist treatment facility to be processed and after harvesting the nutrients and cleaning the water - disposed of. Now an infrared motion detector senses your movements and automatically flushes the toilet the second you get to your feet and start pulling up your pants. No fuss, no muss and hey if some dude dressed up as a girl wants to go take a man sized shit in the ladies room including all the farting, plopping and stench that goes along with it then go for it - our plumbing infrastructure can handle it and maybe the ladies will start to understand why their husbands hate stopping on that 7 hour road trip to "go to the bathroom". Just hold it like the transexuals used to do, but no longer will accept because it's their civil right to turn the ladies room into a bio-hazard zone.

The restroom revolution has a 99 year old history and, like so many things that are wrong, can be blamed on the handiwork of Marcel Duchamp. R. Mutt is the meta-identity assigned to every human being by our cultural overlords in the modern age of pre-fabricated, soulless machine-people who are so detached from reality that they don't even know what sex they are even when they're holding their dick in their hand. It springs from a nihilism that began as a trickle but year after year, decade after decade was joined by more and more streams of deluded consciousness until it created a mighty river overflowing its banks and now an ocean that produces gigantic waves that batter the shoreline of normalcy and, on occasion, tsunami that wash over and swamp the world. There is only one chance for safety and security from this raging sea of dookie infested filth - Build a Wall and seek higher ground. Trust in God, help your neighbor and watch the infidel and atheist get washed away by the undertow. Humans can never "win" this bathroom battle but we must protect our people and our civilization from the restroom revolution until its foul waters calm and subside.