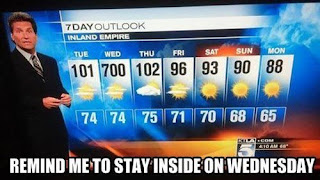 The other night I was talking to family and friends about the mass murder (psychopathist) attack in San Bernadino, CA and how incredible and ironic the location was, knowing the Inland Empire as I do and particularly its citizens who, in my experience, have all moved there NOT because they love the hot, arid dessert but because they couldn't stand living in LA for another day. They fled the corruption and social turmoil that's decimated middle American communities in established Southern California cities and pitched their tent in one of the most unforgiving, inhuman environments ever devised by man - think of them as domestic refugees escaping a festering war zone. "Well, what would you compare it to here on the East Coast?" asked one of my companions. Nothing - There are some south western cities that resemble it - East Phoenix, Albuquerque (maybe), LVNV - but There's nothing East of the Mississippi that a person could point to and say, "yeh, that's sort of like Riverside" - Nothing at all.

Mile after mile of steaming hot asphalt serves as black tributaries for blob-mobiles ferrying consumers to and from their prefab homes to strip malls and big box retailers that seem to pop out of the desert sand like colossal mushrooms in the middle of the night. Endless strands of wire hanging overhead holding countless traffic lights that blink from green to yellow to red as you drive, and drive and drive some more past glass and steel eyesores surrounded  by palm trees. The mountains (on a clear day) to the north, the uninhabitable (so far) dessert to the east, the 215 to the south and the place you escaped from to the west. It used to be the "middle of nowhere" but now it's full of people - millions of people who call it home. Like most migration stories, the criminal element came right along with the immigrants and set up shop so what the people of San Bernardino were fleeing soon took over what they were creating but it still wasn't as bad as what they left behind in LA. 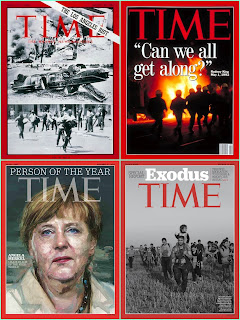 And so the Inland Empire migration story continues - from the 1960's to the 1990's to today. Immigrants, domestic and foreign, looking for a place to live, to be free and raise a family - speak their mind, pray as they see fit, associate with those they like and own a gun... wait a second, what? Why would you want to do that? This isn't Everytown USA brother and "we can end gun violence now" if we put our voice to it. No, this is the new world and if enough people "want" something then we'll just make it happen through Executive Order. The President has to do it unilaterally because in the Land of the Free the peoples representatives just won't violated the US Constitution so there's no option available except dictatorial proclamation. If only Everytown were like Germany - an occupied country fully dependent on the US Federal government for our safety and security. In Germany, you have to have a good reason for owning a gun because, like so many other parts of Hun civic life, there are sensible restrictions (for good reason). 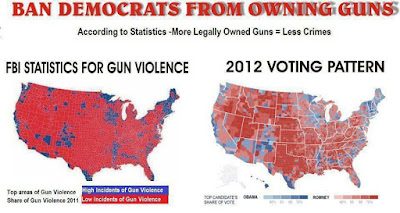 The truth is that America - the real America - is filled to the brim with guns. There are so many guns in the USA that, based on volume of firepower and ubiquity, the entire country (meaning every town, county and city) should be in perpetual violent war with hundreds of thousands dying each month. But it doesn't happen that way does it? No, "gun violence" and just plain violence is localized in specific towns - Not Everytown. And Everytown shouldn't have to sacrifice it's liberty on the bloody alter of Rahm Emanuel's true religion of Progressive Power. 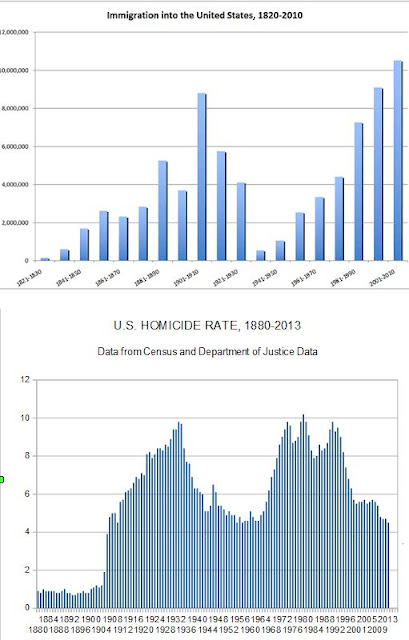 There is one correlation with violence in the USA that I find quite interesting in light of current debates on terror, immigration, guns violence and all the rest of it. There is an obvious connection between US immigration policy and national homicide rates - more immigrants = more murders. I know, I know, "we are a nation of immigrants" just save that crap for the TV watching schlubs who eat it up without thinking. I'm not an immigrant and I'm not shooting anybody, nor was my father an immigrant nor was his father and I'll tell you something else - they all had guns in their house (lots of guns) and they never shot anybody on purpose or by mistake. It just might be that halting immigration is the answer to our "gun violence" epidemic. It sure beats violating the Constitution and starting a civil war.