In the life imitating art category America got a winner on Sunday night (twice) and it throws into sharp relief the difference between the two. Art, which is created by the human mind and hand, presents a simulated illusion of Life, which is created by God, and is mystically authentic (i.e. Real). A simple example that most people can relate to is the 9/11 World Trade Center attack and collapse which had been portrayed 100+ times in movies using proxy buildings destroyed by every form of enemy including space aliens, German bank robbers, foreign advisaries and Nature but none of those demolitions came close to capturing the real thing pulled off by some Islamic nut jobs on commercial airplanes. Unfortunately, we live in a country (a world) that is absolutely saturated with artifice designed to displace or tamper living experience and when reality strikes a blow it really floors people.


To understand the reactions of these Chicago Bears fans it is helpful to watch the "Ice The Kicker" advertisement by Pepsi which proposes the ridiculous fantasy that if enough (good) people drink sugar water their enemies will doink themselves into failure allowing the virtuous to flutter their way into the next round of the playoffs like some Dirty Bird.


This commercial was broadcasts on NBC minutes before the "real" game winning/losing kick took place and was still reverberating in the minds of Bears fans which made the cold doink of Life all the more painful and "unreal." Anderson Cooper had a similar experience when he interviewed Alexandria Ocasio Cortez broadcasts just after the playoff game on CBS's All Seeing Eye called 60 Minutes.

“There's a lot of people more concerned about being precisely, factually, and semantically correct than about being morally right,” @AOC says in response to criticism that she’s made factual errors. https://t.co/sKf3sHl9F6 pic.twitter.com/xKc2eB7GEk
— 60 Minutes (@60Minutes) January 7, 2019

Not only is she "morally right" but she's also a smokin' hot fox which is even more important than morality when questions of factually correct statements are raised and AOC uses that beauty like a pro. What Time Magazine called a "28-Year-Old Former Bartender" (without naming the bar) is #FakeNews by way of omission because the "bar" in question was the hipster hot spot known to every shallow man in Manhattan as The Coffee Shop and that establishment only hired smokin' hot foxes to serve up burgers and fries. Think of it as a Hooter's for the downtown dudes who work in the publishing, advertising and design industries staffed by fashion models and actresses picking up a few dollars in very generous tips between photo shoots and theatrical engagements. 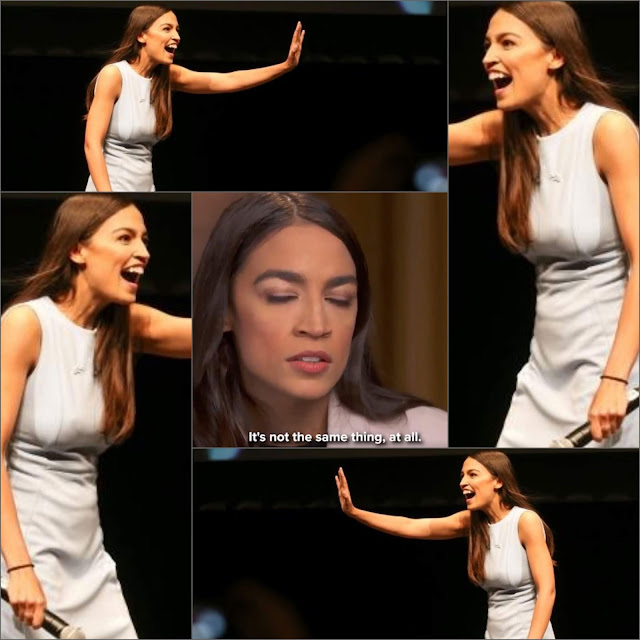 She's beautiful and men, even gay men like Anderson Cooper, will always forgive a beautiful woman for an unlimited number of doinks just for the pleasure of talking with her. The world is full of AOC's who jabber on about morality and much more filled with factual inaccuracies and loopy ideas but having big eyes, a beautiful smile and a great rack are received with attentive ears and hungry eyes. As an example check out this exchange of ideas:

“The president certainly didn’t invent racism,” said Ocasio-Cortez, “but he’s certainly given a voice to it, and expanded it, and created a platform for those things.”

“Do you believe President Trump is a racist?”

Ocasio-Cortez could hardly believe the question. “Yeah,” she said, shaking her head. “No question.”

“How can you say that?” asked Cooper.

Umm, she can say that because she's a smokin' hot fox and it doesn't matter what she says. After AOC won her primary against poor old Joe Crowley there was confusion across the land (not just in Queens) and the Jacobin decided to break it down in an article titled "Why Alexandria Ocasio-Cortez Won" which make this highly relevant point:

"White people representing majority-minority districts are intrinsically vulnerable. There are more of them in Queens. Make a list and come at them." 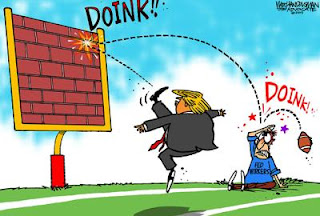 This racial/ethnic realpolitik was expounded upon at length in KOTCB Muro del vudú but the gist is that AOC who had no experience, no money and no qualifications except physical beauty played racial identity like a modern day George Wallace to win the primary. Once she upset the 10 term whitey who was being groomed to be Speaker of the House (and probably would be today if not for AOC's racist victory) the young woman went through a branding change to wipe off the dirt of her primary message. But don't think that Nancy Pelosi or Chuck Schumer don't know what happened and why it really happened so expect a Big Beautiful Wall Fence to get funded and built before the 2020 election. Racism is a wonderful thing when used as a club to beat your enemies from the moral high ground but it's also a weapon that can be picked up and used to bludgeon a true blue moralist like Joe Crowley by a beautiful girl. Doink.... Doink...