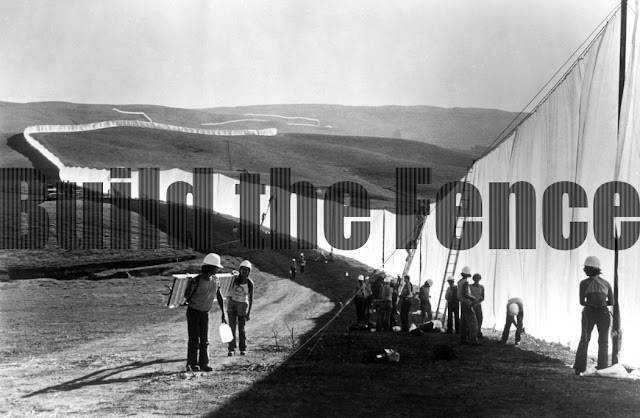 You probably know that the Congress (specifically the Senate) and the POTUS are at loggerheads over Federal funding for the Big Beautiful Wall to be built along the US southern boarder. The reasons for this impasse are long and complex so a quick review of how we got here might be in order.

I have to admit that my conception of The Wall has been pretty constrained over the past 3 years having seen the proposed prototypes, the existing sheet metal fence (which works practically but not aesthetically) and other examples of boarder barriers erected around the world.  I had been picturing some kind of combination of The Great Wall of China and the High-Deterrent Trump Wall pictured below - something that could be seen from outer space and would cost every bit of $50 Billion+ to build and maintain. In other words, an expensive eyesore that would cause maximum shock and awe to The Wall's opponents and serve as a physical rebuke of the Folly Wall they've been building for the past 40 years. 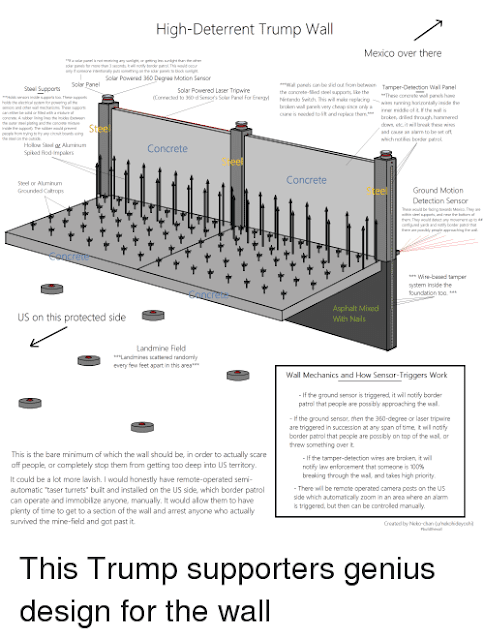 Then POTUS Trump loaded up the trebuchet and tossed this bolder deep into my mind.

A design of our Steel Slat Barrier which is totally effective while at the same time beautiful! pic.twitter.com/sGltXh0cu9
— Donald J. Trump (@realDonaldTrump) December 21, 2018

I began to imagine mile after mile of steel slats winding its way along the  Gadsden Purchase and up the Rio Grand. I pictured the late afternoon light pouring through the slats and casting amazing shadows on the desert floor and the incredible lightning strikes dancing across the Arizona sky when a spring thunderstorm rolled in. The sound, mysterious and fearsome, of the dry wind blowing through these 30 foot metal spikes filled my ears and my mind began to open to the artistic opportunity presented by the "wall or a fence or whatever they want to call it." So here's my idea: hire Christo to build this work of art and use the NEA to pay for it.

Long time KOTCB readers know that I have my issues with Christo and Jeanne-Claude (but I've defended them too) so I'm conflicted but with regards to solving this particular political cat fight someone from the National Endowment for the Arts should get Christo on the phone ASAP. First of all, Christo has done this before way back in 1976, about the time this mass illegal immigration problem was first starting to take off, the artist built a 25 mile long fence in the Northern California counties of Sonoma and Marin for NO REASON AT ALL. No petty justification like protecting American workers, strained social services, cultural disintegration, child and human trafficking, drug smuggling, cartel gangs like MS-13 or murderous crime were required to secure funding for this project and one might even say that the lack of any conceivable objective was what propelled the Running Fence to it's eventual completion. Not that it was easy, because it was not, and that bureaucratic struggle was effectively captured in a film by Albert and David Maysles titled "Running Fence" in honor of the project they documented. Christo and Jeanne-Claude had to win over the rugged agrarians and pitched their vision with earnest intent explaining the benefits of their installation and patiently answering every objection because it was the farmers and ranchers who, after all, would be providing the ground (as it were) for this Big Beautiful Fence and once they had accomplished that task the real trouble started.

"Ultimately the ranchers decided it was a good deal. Some artists and urbanites, however, were not as enthusiastic. They formed a group called the Committee to Stop the Running Fence, dragging out permit hearings with claims that the fence would wreak havoc on the land. More than one artist said the project wasn’t art."

Sound familiar? Pity the constrained and banal minds of artists and urbanites who, due to jealousy and provincialism, can not see the glorious truth. Sad. The battle was ferocious and very litigious but in the end Christo prevailed and Running Fence was erected with wonderful results as chronicled in Sonoma Magazines commemorative article "Christo’s Running Fence 40 Years Later: Photos, Stories & Memories" which ends thusly:

“It was strange,” said Gonnella as she sat in the shadowed dining room of the Union Hotel following the lunchtime rush. “Once the fence started going up, once people could drive out and see this miraculous thing unfolding across the land, all the bitterness, all the protests, just kind of — stopped.”

On top of Christo's preparation and accomplished career of building monumental art it is worth noting that he is an immigrant to the United States and this fact would mitigate the common calumny of Know-Nothing xenophobia leveled against proponents of The Wall Fence by our nations philistines who, lacking taste and refinement, can't get past their simple way of seeing the world. The current budget for the National Endowment for the Arts is a paltry $152,800,000 so what are the Democrat obstructionist going to say when Trump decides to juice it to $6 Billion? That's a 3,900% increase in Arts funding from the Federal Government and I just don't think #FakeNews will be able to spin that as a bad thing. The Fence will serve as Christo's crowning achievement and, though nothing is eternal in this world, it will be around for a long, long time which is an opportunity few artists can pass up. So let's get started building Christo's Fence so that we can put all this arguing behind us and come together as Americans.