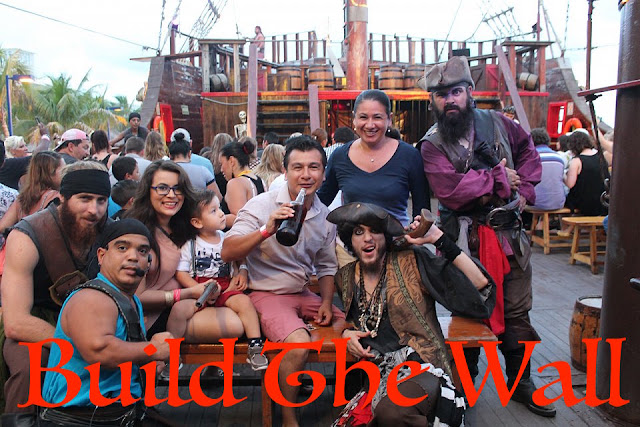 I've always had a soft spot in my brain for pirates. From Sir Francis Drake (circumnavigated the globe) to Donald J. Trump I just can't get enough of them and have studied their exploits and instructed my children on their methods and motivations that they might become something of a pirate themselves. The brotherhood (and sisterhood) of these outliers is worthy of emulation and the live free or die (and many did die) ethos must be inculcated at a young age before life has a chance to beat you down into an office cube and annual spring vacation to some exotic local where licentious debauchery is your only release from the mundane paper shuffling that consumes your "life." The sad fate of Captain Kidd, the barbarity of L'Olonnais, the scrappy opportunism of Calico Jack and his shipmates Anne Bonnie and Marry Reid have been recited and, if I do say so myself, enhanced in hours of parental instruction to my young charges. I have paid particular attention to the stories of Thomas Tew and Edward Teach (AKA Blackbeard) as heroic and cautionary role models respectively for I love their courage and Americanism above all else. So when I saw this story about controversy in Mexico I figured it was just gringo's drunk on Mexican hooch during their two weeks "off" (i.e. on vacation), or should I say out, of their cube.


CANCUN — What would be a dream night for Suly and Anaximandro Amable, a newly married couple who went to Cancun for their honeymoon, became a bitter experience on Monday March 13.
During a family show on the high seas, young American spring breakers began to sing the controversial “Build That Wall” chant, which shocked Mexican national tourists and workers.
This is just one of the many blameworthy behaviors that young spring breakers have shown recently in Cancun and that are described as acts of xenophobia and discrimination against Mexicans within their own country, which is (or should be) totally unacceptable.

But then I saw a commentary on the event in question on The Nation web site and learned that all this xenophobic chanting occurred on a pirate ship and it all made sense.


"Those kids in Cancún were raised on what is in effect a giant pirate ship masquerading as a country, the children of unending war, taught to believe that their jurisdiction is universal, their writ is global, even as their resentment—a feeling that they live in a nation under siege—is exceptional. Build that wall."

Yes, America is one giant pirate ship, now go swab the deck you left-wing pansy pencil-necked land lubbers. You guys at The Nation must never have been south of the border to that jewel of civic minded harmony called Cancun (or Cancún as you like to say it) because if you had you'd be shouting Build The Wall at the top of your revolutionary red lungs. On the list of The 10 Worst Spring Break Hell Holes Cancun is number 1 and I can promise you that, were they ever to spend time there, everyone affiliated with The Nation would despise the place and figure out some way to blame the USA for what they experienced there. Thank God there are enough clear eyed and, I assume, well educated Americans visiting Cancun to see the place for what it is and demand a wall be constructed to keep whatever political and cultural stew that created it from spilling over the boarder and creating this "hell hole" on the US mainland.