A second childishness and mere oblivion 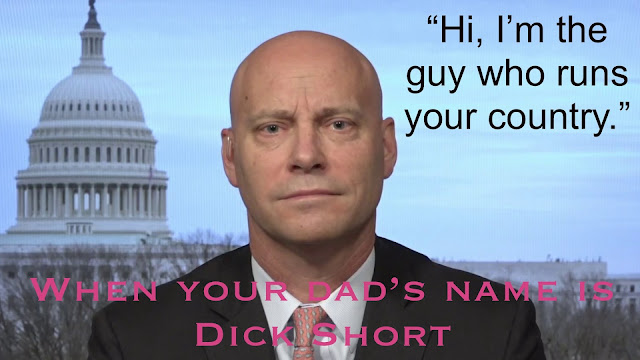 One of the greatest things about Trump is the way his candidacy and presidency exposed the fraudulent foundation of an entertainment establishment that produces, directs, edits and performs the Clown World theater of our meta-reality. These performers are comprised of well known thespians of stage and screen, TV talking heads and court jesters for the Administrative State, Rock & Roll troubadours and thousands of strange “public personalities” or influencers who have the spotlight of fame shine on them for inexplicable (but obviously nefarious) reasons. Sportsball athletes, popular “scientists” of note, authors and artists and spiritual leaders also play their part in this grand illusion which is organized and managed - sometimes loosely, sometimes tightly - by the Intelligence Community of the USA. In this regard, the chief “actors” in what has become a demonic tragic-comedy are the “elected” politicians who claim to represent the will of We the People but are, in fact, soulless puppets without agency who mouth the words of the spy masters who put these controlled and compromised frauds in their cushy House and Senate seats. From the standpoint of everyone involved in creating and maintaining this American Carnival which, as it happens, provides them a very comfortable existence at the expense of the rubes watching the show the rogue Putt Pirate who pulled back the curtain on their production, gave away the magic tricks, demolished the fourth wall and hired Russian hookers to piss on their charade is a very, very bad man.

“In our nation’s 246 year history, there has never been an individual who is a greater threat to our republic than Donald Trump. He tried to steal the last election using lies and violence to keep himself in power after the voters had rejected him,” Dick Cheney says in the one-minute ad, titled “He Knows It.”

How is it even possible for Veep Cheney to read this script with a straight face? That’s the question, right? We’re talking about Donald John Trump here Dick. You know, the Elvis from Queens, the Überfrau, shitposter extraordinaire, the Emergent Phenomenon who grabs womyn by their pussies and loves the game of golf - the guy with the crazy hair, beautiful wife and great stand-up comedy act - The Donald is the most threatening menace to “our republic” in the past 250 years? Really? What say you to men like Aaron Burr, Jefferson Davis or Julius Rosenberg who fervently plotted (and acted) to mutate, divide and destroy the United States of America? Perhaps Dick should look to a more modern "threat" - one he personally managed for 8 long years of Compassionate Conservatism. 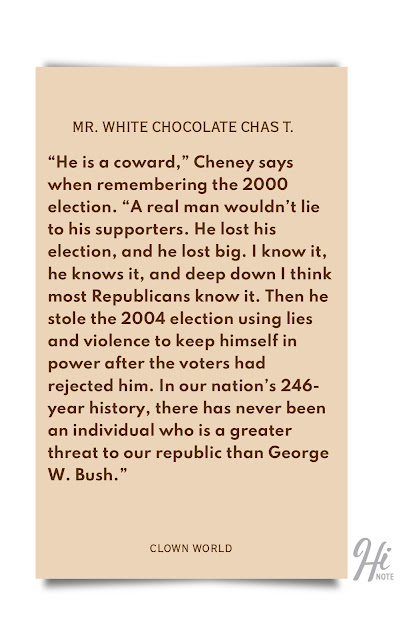 For anyone who has lived through the 50 Years of Failure this Bush/Cheney family blood feud with the Trump insurrection is so full of hypocrisy and dishonesty it make you wonder if the act is just more aforementioned political theater fabricated by the worst scriptwriters in Langley. Exhibit A: I want you to read what I’m about to write real slow so that every word can sink deep into your mind where it will fester until your head splits wide open and the FakeNews bile seeps out of your brain and pools on the floor where you can see it free and clear - Dick Cheney is now being cheered as a hero by the Leftist Democrats. You read that right. Read it again. Dick Cheney is now being cheered as a hero by the Leftist Democrats. Darth Vader has been embraced by the Rebel Alliance and while this ideological conversion is apex Clown Bell I’m not so jaded and merciless that I can’t feel sympathy for these tortured donkeys and NeverTrump pachyderms who have been whipped relentlessly by a 5G warfare PsyOp for the past 7 years. The caricature of Cheney, who was Ford's CoS, Bob Michel's Whip in the House, Poppy Bush's apparatchik and W's supervisor, as some kind of arch-conservative boogieman was always stupid but that didn't stop the FakeNews media from portraying the same-sex marriage advocating DC lifer as a crypto-fascist "Conservative."
In the peculiar case of Dick Cheney that deep state IC mind manipulation has been at work since the early-1970’s when he served as the Marc Short of his day delivering orders from the corporate masters of the universe to Gerry Ford. From those dark days of the Nixon coup d'état and throughout the decades of America's managed decline Mr. Cheney was a key player in maintaining the system of government that emerged from the New Deal and Great Society - Whatever that is. Call him a fascist. Call him a warmonger. Call him a principled conservative. Call him whatever you like but he dutifully implemented the social, trade and financial policies of the Uniparty and that includes all the wars which fellow Swamp Critters like Hitlery Clampett and Jo(((k)))e Brandon voted for too. He was never the evil puppet master of the vast right-wing conspiracy - just an actor, playing his part and taking orders from the spymasters, industrialists and technocrats that run the modern world. From 1988 on he did all his dirty work with a cyborgs mechanical heart and 10 years ago (2012) he replaced the malfunctioning ticker with SOMEONE ELSE'S HEART entirely. 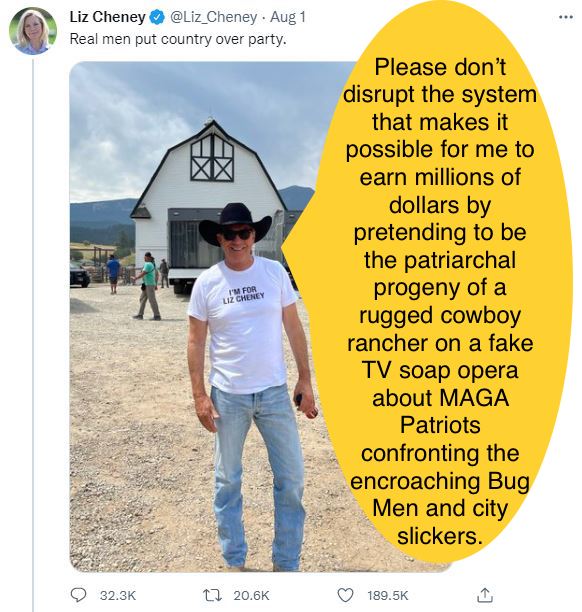 In 2016 Dick's Falun Gong heart stayed in the game by installing his Karen daughter in the sole Wyoming House seat which he occupied himself during The Reagan Interruption and this act of nepotism is more shameless and corrupt than anything in American politics since 43's Y2K election installation. Say what you will about Hunter Biden but at least the Big Guy didn't inflict the grifting junky whoremaster on the US House of Representatives. Daddy tried to stick Liz in the Senate in 2014 but the GOP lifers in the Cowboy State weren't gonna let that happen so she had to settle for a leadership slot in the House and a microphone on all the FakeNews networks. What an absurd joke -  her victories in '16, '18 and '20 in sham "elections" prove the base dishonesty in "our democracy" because nobody in Wyoming would ever vote for this schoolmarm shrew. She doesn't even live in the state and her blond bouffant and Chanel pants suite do not represent the values of Wyoming's voiceless constituents. Now, to save her worthless ass in a primary election the Uniparty is calling in celebrity IOU's and the heartless old man has the gall to libel Trump a coward.
Rip its heart out again!
The Bard captured the melancholy cynicism and rationalizing cowardice of Dick Cheney in the character of Jaques in As You Like It who delivers the 'Seven Ages of Man' speech.
All the world's a stage,
And all the men and women merely players;
They have their exits and their entrances,
And one man in his time plays many parts,
His acts being seven ages.
Thus starts a jaundiced reflections of a worldly chevalier who recounts the folly of man's striving through a series of cliches marking a long life journey. Each age is distinct and as a man, like Dick Cheney, advances through his stages there are younger men, like Marc Short, to step in and fill the retired role. But now, 35 years after he should have died from natural causes, the Dark Lord of the Sith has reached the last of his 7 lives.
That ends this strange eventful history,
Is second childishness and mere oblivion,
Sans teeth, sans eyes, sans taste, {sans heart}, sans everything.
The National Security State, which Dick Cheney represents, is a toothless, sightless, tasteless (and heartless) geriatric tyrant. Trump exposed the trap doors, swept aside the props, turned the flood lights on the stage managers thereby showing what a fake production it all is. He does not play his assigned part nor does he believe in the platitudes that define the Seven Ages of Man. He courageously calls out the bullshit in the script while the fake, phony, frauds in the play indignently insult and harass the man from Mar-A-Lago. Best of all, an army of patriotic Americans have started to swell in number and these heroes are not the kind of people that anyone should toy with - especially the Cheney's.