January 05, 2020
Back in 2012, on the anniversary of 9/11, there was an attack on some US Government buildings in Benghazi, Libya and an Ambassador and some CIA guys were killed by terrorists. The whole thing was blamed on a YouTube video - and no, I'm not making that up, for while a lot of raw sewage has flowed under the Benghazi bridge in the ensuing years the fact remains that for the better part of a month the "official" story out of the White House and State Dept. (((echoed by the #FakeNews Scum))) was that the protests resulted from an inflammatory video - titled "Innocence of Muslims." Hitlery Clampett even said "I'm Sorry" to the Islamic world - not for anything she did, but for the fact that America has a 1st Amendment and sometimes objectionable artwork gets produced and distributed - and promised to punish the filmmaker (Nakoula Basseley Nakoula AKA Sam Bacile did go to jail). There is no accounting for taste, but I have to speak up in defense of Nakoula and say that his movie is pretty damn good and underappreciated by most critics for it's surrealistic cinematography and fractured timeline - also, the performance of Muhammad is hilarious.

Nobody rioted because of this film. The lies and misinformation created by the CIA and State Dept and regurgitated by the Mockingbird Press were all designed to obscure the true cause of 9/11/2012 and that cause was the Legacy of Obama’s ‘Worst Mistake’ as described in a Fox News interview with Chris Wallace (see KOTCB A sentimental journey amid the lightning round)

What went wrong? Obama has placed the responsibility on the entrenched tribalism of Libyan society, as well as the failure of America’s NATO allies to step up to the plate. Blaming the Libyans and Europeans may be satisfying, but it misses the deeper reasons for the debacle, which are rooted in how Americans think about and fight wars. 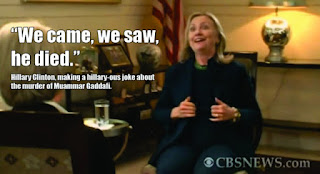 March 2011 was smack dab in the middle of the Arab Spring and the US Commander in Chief let slip the dogs of war by "leading from behind" and deploying "smart power" with a NATO-led coalition that bombed the shit out of Muammar Gaddafi. United Nations Security Council Resolution 1973 proposed by France, Lebanon(???), and the United Kingdom gave Obama and his Generals all the cover they needed to transform this, admittedly, struggling North African dictatorship into a fully whacked-out failed state. The best part of the entire operation is that no single entity was responsible for the carnage because nobody really declared war or even asked permission to attack the Libyans or even prepared The People through Congressional debate and the fig leaf of a resolutions approving the "use of force" whatever that is. NATO just did it and so Obama could blame the EuroTrash Technocrats and, get a load of this, "Libyan society" itself for the horror that unfolded as a direct result of his Imperial Presidency, Commander in Chief, Executive Order. The only person that kind'a, sort'a took responsibility for the the attack was Sec. of State HRC who, in her Julius Caesar mode, joked, "We came, we saw, he died." Hahahahahahahaha!

HillBilly was joking on October 20, 2011 but in less than a year she would be apologizing.
She is still saying, "I'm sorry."

And she's not alone. #MeToo Rose is on her knees, #KapSoBlack is not surprised, #FatAss Sparty Moore is collaborating with the Ayatollah. Not everyone is apologizing for the death of the Iranian guy, er, the number 2, um, the leader of their, er, Red Force or Cudz Guard or whatever they call it... what's his name... oh, whatever... Not everyone is sorry, but a lot of people are because, hey, we hardly knew him. In the immediate aftermath of the latest drone strike in Iraq there were a lot of questions in the US #FakeNews Sugar-Toasted Puffs of Wheat.

Back in the Fall of 2015 Donald J Trump didn't even know who Qasem Soleimani was and got ridiculed for it by #NeverTrumper HuHew and the LA Times in an article titled "Who is Maj. Gen. Qassem Suleimani, the man who stumped Trump?"

In an extraordinary interview on live radio this week, Donald Trump seemed to stumble when he landed in the Middle East. It started when he was asked about Maj. Gen. Qassem Suleimani, the powerful and popular military officer who heads the elite Quds force of Iran’s Revolutionary Guard Corps.

“The Kurds ... have been horribly mistreated,” Trump suggested, prompting an exchange with radio host Hugh Hewitt that at times sounded a bit like a Laurel and Hardy routine.

“No, not the Kurds — the Quds forces, the Iranian Revolutionary Guards Quds forces,” Hewitt said. “The bad guys.”

Kurds, Quds: What should* Trump know about Qassem Suleimani?

*Emphasis in the original text.

I guess over the past 3 years Trump regained his footing, figured out who Soleimani was and what to do with him. ALEXANDRA ZAVIS wrote the 2015 LA Times article so... Fuck you Alexandra Zavis (and your twat faced Editor Davan Maharaj). Let me give a double fisted Fuck You to the entire Media Establishment from the NYTimes to Fox News, from Leftist polemicists like Oliver Stone to Right Wing propagandists like Sean Hannity, from Government Radio NPR to Internet Iconoclasts like Matt Drudge - FUCK YOU! 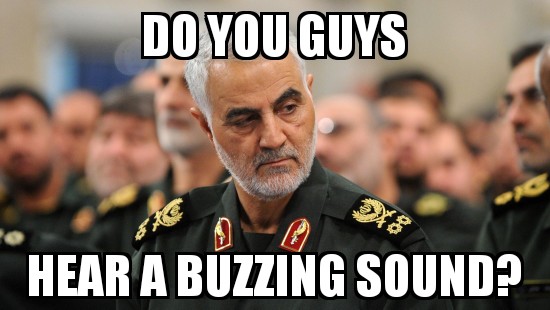 It turns out that Qasem Soleimani is the guy responsible for the Benghazi terrorist attack on 9/11 2012 (not Nakoula) and a lot more...

The Quds Force, which Soleimani led, essentially runs the logistics, ideological guidance and military affairs of numerous Iranian proxy groups across the region. He’s credited for turning the war in Syria in Assad’s favor and directing the Sept. 14 drone and missile attack on Saudi Aramco’s oil facilities, among many other operations.


This guy (Soleimani) who nobody's ever heard of was "the puppetmaster" behind all of it. The Free Press is supposed to inform and educate We the People on current events. Our friends. Our enemies. Who's doing what to whom and why they're doing it and for 20 years+ this Iranian bad guy has been doing it all and "We" don't learn about anything until Trump greases this Major Player with a drone a few days ago. Too late... It's always too late.