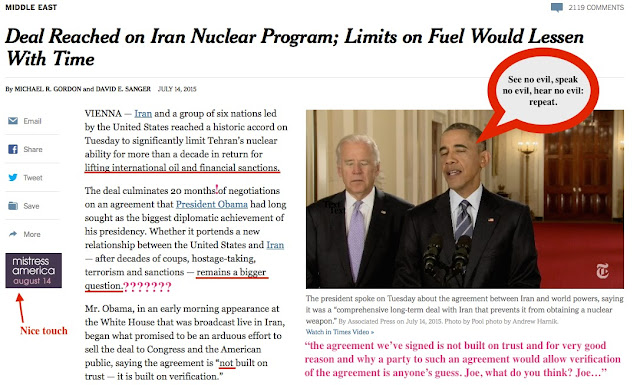 Unless you are an arms merchant, oil trader or terrorist it's hard to get too excited about the group of six "deal" signed yesterday with the Iranians. When I want to know what's going on in the mind of the Democrat party regarding these events I always click to their PR team at the New York Times and as you can see from the screen shot the NYTimes did not let me down. They even published a press release from the White House on their editorial page which included a few beauties like this:


"The deal nearly faltered on a demand by Iran and Russia that United Nations bans on the purchase and sale of conventional weapons and ballistic missiles be lifted immediately. But in the end, the accord requires that the conventional weapons ban remain in place for five years and the missile ban for eight years — assuming Iran abides by its commitments." Right. I bet that was a deal breaker - No conventional weapons sales! No missiles! Get with the program John Kerry, there's some serious coin to be made across the entire region. Take a look at the map dude. It might be hard for Americans to understand this, but over there the pressing issues of the day are not Gay Marriage or Transexual Rights but rather who's version of Islam will come out on top and unify a Pan-Arab empire for the 21st Century - serious stuff. And that means war - not twitter war, but real war with lots of money spent on armaments and NOW nukes! That's right, nukes all around - nukes to the Saudi's, nukes to Egypt, nukes to Somalia (for Christ's sake), Nukes to all the Sunni's who don't want to be marching to the Ayatollah's drumbeat. Don't tell it to the cheerleaders though, there's going to be a lot of peace to accompany the bloodshed and awards will be handed out by the Masters of War.