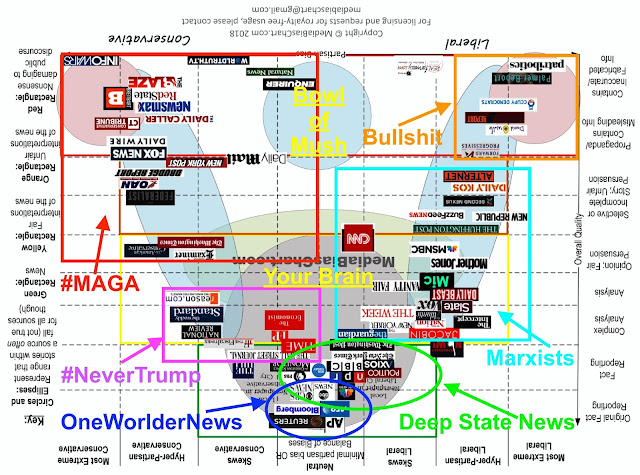 Have you ever seen the Media Bias Chart (v3.1) hosted at the All Generalizations are False web site curated by Vanessa Otero? It was created to help folks understand what kind of news they are consuming and let them know what's #FakeNews and what's real news and where it all fits in the larger mediasphere. The chart is what one would expect from a patent lawyer turned media analyst and it's formal Left/Right axis with a "fair" scale for news sources is predictable, by the book, Blue Pill conventional wisdom. However, looked at the right way it can be very instructive and so I have inverted and annotated Vanessa's chart in an effort to give "news consumers" a clearer picture of what, in fact, they're gobbling up in their day to day info grazing.

The first thing to point out about the chart is that it leaves off Facebook, GoogleNews, Twitter and many other social media news sources that are becoming the primary means of gathering information for many people. There is a deep bias in Facebook news and it's not Zuck's fault or the fault of rouge employees who tweak some algorithm but is the direct result of left-wing assholes self-righteously letting everyone know exactly how they feel about life. It's not baked into the platform or the AI that guides it - It's baked into the brains of the people who use Facebook who see the world exactly the same way that Vanessa Otero sees it. Second (and this is related to the first) is the absence of soft news periodicals like women's magazines, fashion rags and trade publications the vast majority of which "skew liberal" as Otero defines it and "inform" their readers, subtly, what they should be thinking about and how they should think about it. Third, the grid itself is preposterous for anyone who thinks about must admit that the Skews Liberal column is broad - liberally so - while the Skews Conservative column is tightly constrained to the point where stepping over the line to Hyper-Partisan Conservatism is one wrong word or inappropriate analogy away. Liberal news sources are given much greater license to throw their wacky ideas against the wall and see what sticks without getting called on the carpet for their Hyper-Partisan editorializing. Fourth is the illusion conjured in the diagram that there is roughly an equal number of "Liberal" and "Conservative" news sources to choose from when, in fact, almost every right of center news organization (except Talk Radio) is placed on the grid while only a small percentage of the liberal news outlets are identified. Even with this sin of omission the liberal outlets outnumber the conservatives on this chart but were the full scope of this disparity to be accurately displayed the true magnitude of the news "problem" would be astounding. Fifth, the true measure of a news organization is it's overall influence on the downstream or fringe media outlets and so there really should be a quantitative/qualitative measure to the size of each news logo displayed on the chart. For example, The New York Times is represented as a small sliver of Neutral/Skews Left news but it's impact on ALL other news sources is profound and as the "paper of record" it sets the tone and chooses the stories that all the other lazy journalists cover for the day.

On that last point - point #5 - I have to draw attention to a glaring, and I must believe spiteful, error in the placement of The Drudge Report on this chart (very Hyper-Partisan Conservative and Unfair) which relegates this news portal (a kind of cyber-front page) to the low, disreputable right. Say what you will about Matt Drudge and his politics or the stew of stories he links too (many of them from left of center news outlets) but the fact is that as a news trend setter he's right up their with the NYTimes and YahooNews. Many "fair" and "neutral" journalists make the Drudge Report their first or second stop each morning when they cybersurf the web for what's hot or noteworthy in the world around us. Drudge doesn't even write news stories or opinion pieces - the web site has one page comprised of links to multiple news outlets and when one of them, say WaPo, does a hit piece on Drudge for linking to disreputable sources they always have to throw in an inconvenient truth:

It’s important to contextualize this. From 2014 to 2016, links to Infowars, RT and Sputnik were only a small part of the links on the site. There were far more links to The Post, for example — and to Breitbart.

By "far more links" WaPo is being coy because we're talking a 300:1 or 400:1 ratio depending on the day and while it might feel a little grimy to be sharing space on the same page with InfoWars it has to be said that WaPo gets the better end of the deal - Drudge claims to drive 37% of WaPo's web site visits. 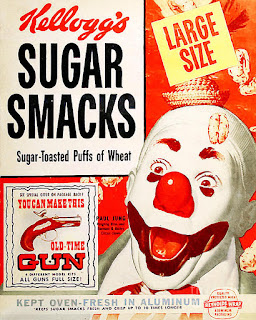 All that being said, I still value the chart (especially with my annotations) because it shows, underlying the News Logos, a person (you) sitting down to eat a bowl of pabulum and accurately presents a visual representation of what's on the menu. The mind is already full of Corporate drivel pushed by CIA operatives and the UN News Service so the objective is to measure or critique the authoritative story against something - an alternative view of the establishment narrative. At this point the news consumer (you) are offered, broadly speaking, two choices - 1. pick up a fork and take a stab at some #MAGA news or 2. spoon a bunch of Marxist Bullshit into your brain. What's it going to be - InfoWars or Occupy Democrats? There is no neutral unfair interpretations of the news full of nonsense and damaging to public discourse (unless you count the Keeper of the Clown Bell blog as such a news source) and that leaves a gaping hole for the news consumer to fill. Somethings got to go into the bowl - make it Sugar Smacks.

dleet said…
I watched the Iraq war promotional campaign in 2003 from a satellite dish with BBC, FOX, and CNN. BBC is genuine news. America used to produce news before Reagan killed the truth and promoted K Street lies as Fair Enough Doctrine in blowback from an 'all regulation bad' 'deregulation good' default 'Fog Of War'* posture. The Guardian is excellent too. Note both quality sources are not in the country ranked 46th on the press freedom index. https://rsf.org/en/ranking 59% of Trump voters think Obama is a Kenyan Muslim from fox, drudge, and Alex Jones. that is 11% of the country. Flat earthers are another, then KKK, and John Birchers all under the GOP tent. KKK and the church wee allied a 100 years ago to bust stills instead of abortion clinics. *(see Tommy Thompson, JFK, Cuban Missile, Fog of War-JFK knew once started the whole mess will never be stopped even if both sides agree, so he stopped it first.
6:19 AM