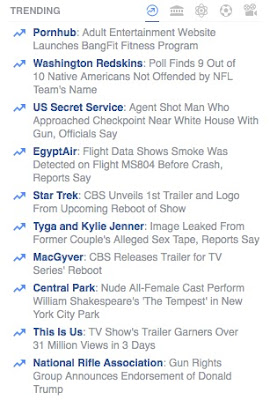 You learn something new every day. I've been on Facebook for X number of years and I've never, ever noticed the "trending on Facebook" feed on the right panel of the interface. It turns out that this overlooked (by me) "news" feed is a primary news source for billions of Facebook users. A rumor spread that Facebook employees were surpassing conservative trends by twerking the algorithms to just highlight news from the NYTimes, CNN and Mother Jones and this accusation forced Zuck to take unusual measures - basically to deny the charge. However, he did invite "conservatives" to come visit the FB HQ and learn something about the company.

My question is: Why would anyone care what's trending on Facebook? Have you ever seen the crap that people post and link to on Facebook? It's all mindless drivel and political propaganda with some of the stupidest memes imaginable. I'm not talking about the great unwashed - I'm talking about my Friends! They post the most inane content imaginable and I'm supposed to be interested in what these people find important. Of course the Trending Feed is "liberal" because it's always the liberals who are self-righteously blowing up my news feed with their hate and sanctimony. The conservative quietly sift through the crap and wish people happy birthday or post prom pictures. The slant is not caused by the algorithm - it's caused by the people and the different approaches right-wingers and left-wingers take in voicing their political views.