April 05, 2017
The KOTCB blog has a primary target audience of 3, a secondary audience of 6 or 7 and a tertiary audience of (maybe) 20 people so it's content is composed for 3 readers and "enjoyed" by 30 people at most. However, because it's open to the public and erratically promoted its viewership has grown, over the years, to a world wide audience of thousands. I wish it were required reading for the #NeverTrump pundits and journalists because I think it would help them, and so help all of us, to consider the wisdom (if I can be so bold) in its irregular postings - most of them are short and designed to be read while sitting on the toilet or waiting in the checkout line at the supermarket. Alas, they (the pundits) don't read it or if they do, they don't  understand it or believe it or change their mind - they just go deeper and deeper into Trump Derangement Syndrome. 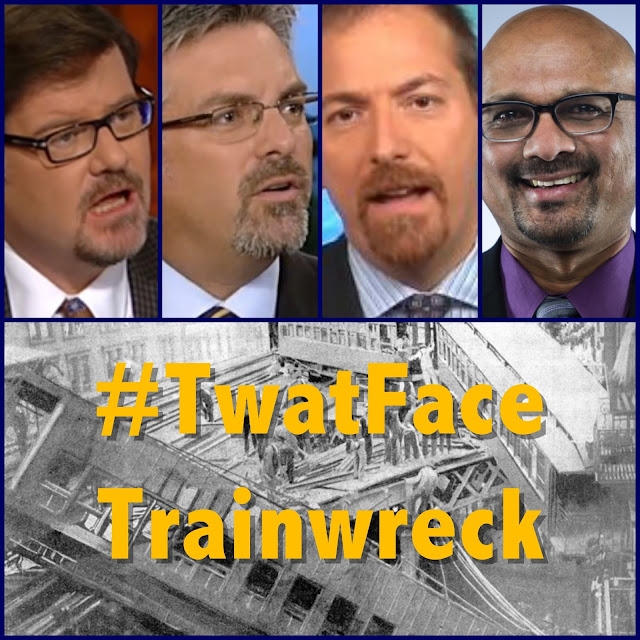 Exhibit A is Jonah Goldberg who writes for National Review and had his bell rung on the KOTCB way back in September 2015 on a post titled Jonass buys his ticket to Tarshish (IMHO 100% right). Well, he's still at it and demanded that Trump Throw Away the New Playbook two months into a 4 year contest - Hey Jonah, we just kicked off and have been playing defense most of the game so what gives?

The other night, I was on Special Report and I made the point that even if Donald Trump was 100 percent right in claiming he was wiretapped by President Obama (he wasn’t), it would still be foolish to say what he did in those tweets. Put aside that Trump based his accusation on some flimsy news articles he had read. Let’s imagine he had a credible source with real evidence to back up the claim. The correct response would be to call in the heads of the NSA, CIA, DOJ, and FBI and get to the bottom of it. Then, after you’ve completed a behind-the-scenes investigation, press charges against those responsible. Trump went a different way, and a month of his first 100 days has been eaten up by the furor. I added that, politically, this whole thing was a huge waste and distraction, including the response by my friend Devin Nunes. He, as the House Intelligence Committee chairman, may indeed have some important revelations to make. But the whole thing could have been handled better. I say with all humility: I was 100 percent right.

And in case you didn't get the message last week, Jonah wrote it all down again today for good measure. Sad.

Exhibit B is Stephen Hayes the Editor and Chief of The Weekly Standard who sat down with David Remnick of The New Yorker to talk About the Future of Conservatism and they come to the conclusion that maybe this Trump thing just can't go on. "It's beleaguering. It has to stop." We're grading on a curve here and Trump's still coming up short. Hayes and Remnick are in agreement - This lying, Big Government, protectionist will... why, Adam Smith would roll over in his grave. Thank goodness TWS is still publishing so that they can exert needed influence on the White House staff and current administration - but even so, that probably won't be enough to save this presidency.

Oh, I'm not finished. There's more, so much more but to stay on point and  bi-partisan let me bring up another #NeverTrumper on the left side of the isle:

Exhibit C is Chuck Todd from MSNBC who declares "the problem is the president" and all his troubles are self-inflicted. All? DJT brought all of this vitriol and hate upon himself? All of these #NeverTrump #TwatFace journalists were honestly hoping for the best and willing to give the man a fair shot? Live and Let Live, as they say, and forget all the terrible things they said about him for 18 months leading up to his election - moving forward with a clean slate and then Trump screwed it all up for everyone. Now he's a "lame duck" and it hasn't even been 100 days - Amazing.

What a fool this Chuck Todd is. His advise to president Trump - admit that Russia stole the election for you and follow Bill Clinton's lead by assigning a special prosecutor to spend the next 4 years looking into bogus charges and making your life a living hell. "That way the scandal will be 'compartmentalized' see, and if you don't do that then the "Russia thing" will consume your presidency. I'll make sure of it."

Exhibit D is Davan Maharaj, the editor and chief of the LA Times who's in the middle of running a six part diatribe against the Elvis from Queens, or as they like to call him "Our Dishonest President."


Today's @latimes editorial Our Dishonest President: "Nothing prepared us for the magnitude of this train wreck." https://t.co/xWngLthvRu
— Davan Maharaj (@DavanMaharaj) April 2, 2017

When Davan says "nothing prepared us" I know for certain that he hasn't been reading the KOTCB blog because if my clown bell ringing has done nothing else, it has prepared the way for DJT and if the people at the LA Times would read my stuff (as Morning Joe would call it) as often as I read their stuff then accepting the reality of Trump would be a lot easier for them. Instead we get this:

"It was no secret during the campaign that Donald Trump was a narcissist and a demagogue who used fear and dishonesty to appeal to the worst in American voters. The Times called him unprepared and unsuited for the job he was seeking, and said his election would be a “catastrophe.” Still, nothing prepared us for the magnitude of this train wreck. Like millions of other Americans, we clung to a slim hope that the new president would turn out to be all noise and bluster, or that the people around him in the White House would act as a check on his worst instincts, or that he would be sobered and transformed by the awesome responsibilities of office. Instead, seventy-some days in — and with about 1,400 to go before his term is completed — it is increasingly clear that those hopes were misplaced."

And there in the last sentence lies the rub - "1,400 days to go" of this super slow-motion "train wreck" and we've already reached terminal velocity at day 70. Imagine what condition these guys will be in on day 700 which is Dec. 21 2018 - after the GOP gains in the 2018 mid-term elections, after Trump's second (or maybe even third) SCOTUS nominee has passed through the Senate, after tax reform, after the infrastructure bill, after repeal and replacement of Obamacare, when the economy is going gangbusters and ISIS has been wiped from the face of the earth. The Russia collusion fantasy will be ancient history and some Obama people might be sitting in jail for the liberties they took in spying on and releasing intelligence on Trump. What will they be writing and saying then? My guess is they'll be saying Merry Christmas through their hairless pie holes and sheepishly writing about Star Trek nostalgia, the Green Bay Packers, their identity crisis and life in the barrio transformed.

Get it out of your system now boys... that's it, let it all out... there, there... it's all going to be okay. No, no, it's fine to cry... perfectly understandable and necessary... it's hard so don't beat yourself up over it. I know, I know, it hurts. The burning sensation of ones wounded pride and the difficult work (and it is work) of self-reflection - the shame! At times it can seem like it's too much to bear, but we'll get through this together and you can always count on me to give you the straight dope in a loving and humorous way. I won't grind your face in it like that mean POTUS does with his tweets and what not, but I do want you to be honest. That's the only "cure" for what you've got so stop blaming Trump for all the problems in the world and take a look in the mirror, shave that vagina off your face and act like a man.