Jonass buys his ticket to Tarshish 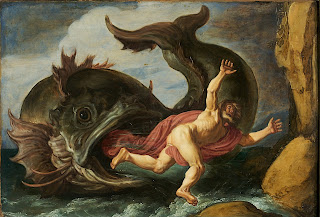 The "conservative" pundit puddle grows larger with yesterdays weekly missive from Jonah Goldberg - creator of National Review Online, son of the provocative Lucianne, author of some fine books (especially Liberal Fascism) and generally affable, if goofy, champion of the right. Yesterday he sent some large percentage (30?, 50?, 70?) of his readers a letter telling them, in effect, that he's heard just about all he can take of their crap, they are unworthy of his preaching and he's going down to Joppa and leave this sinful land for good. Here's his opening statement:


"Well, if this is the conservative movement now, I guess you’re going to have to count me out."

"The people" have disappointed him. Not the people that conservatives laugh and shake their heads at  (i.e. liberal morons) but "his people", you know, fellow traveling conservatives. Then he goes deep into Trump hate - the usual stuff like Trumps nothing more than a celebrity, he's a cat that's been trained to pee on a toilet, his wealth and popularity trump all standards, he demands respect for me but not for thee. But eventually Jonah gets to the point:


"If I sound dismayed, it’s only because I am. Conservatives have spent more than 60 years arguing that ideas and character matter. That is the conservative movement I joined and dedicated my professional life to. And now, in a moment of passion, many of my comrades-in-arms are throwing it all away in a fit of pique. Because “Trump fights!”"

Point A: It's not because "Trump fights!" it's because Trump wins!!! that so many comrades are backing the Elvis from Queens, NY.
Point B: 60 years of arguing that ideas and character matter has gotten "conservatives" what, exactly? $18T in debt, Government run health care, gay marriage, colleges that brainwash youth, a media culture that creates shit, 20 million illegal immigrants, crumbling infrastructure, confiscatory tax rates and deeply entrenched corruption and mediocrity. The "modern conservative movement" played a large part in getting us here.
Point C: This is not "a moment of passion" this is a moment when the electorate realizes that 60 years of the modern conservative movement has brought us to Bush vs. Clinton (again) and that, thank God, just ain't gonna happen.

When William F Buckley Jr. formed the modern conservative movement it's objective was to bring constitutional constraints to FDR New Deal Liberalism and thereby temper the Progressive impulse, but it's goal was never the destruction of a New Deal framework established in 1932. "Conservatism" according to National Review is supposed to "stands athwart history, yelling Stop" and then get run over. It lives parasitically on the hairy back of 20th Century Progressive Big Government gumming up the works, setting booby traps and generally making life miserable for do gooders who, quite understandably, loath it. If you're a "liberal" Social Democrat the modern conservative movement is just a stupid pain in the ass - "conservatives" don't want to overthrow the established order, they just want to make it harder to implement the Progressive agenda to which they always inevitably give in.

Is Trump a doctrinare movement conservative who's faithfully read his Burke and Chesterton? Hell no but even NatReview notes that Trump stands with Bibi which means he takes a stand and doesn't back down. There are many movement conservatives who can't say the same about themselves.

Weezer sang Jonah's song many years ago and it's worth another listen before he gets swallowed by the whale.