Cry havoc and let slip the dogs of war 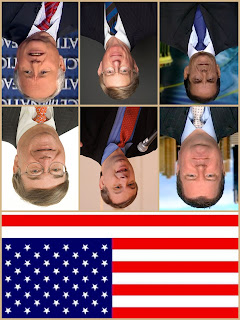 One of the greatest things, of many great things, about The Donald and Trumpian "ideology", as such, is the epistemological meltdown occurring among the conservative commentariat. This is happening EVERYWHERE - NatReview, Fox News, Red State.com, etc. and I could fill this blog with links to Trump bashing by every "sensible" "conservative" pundit in America if I wanted to - but keeping it short and sweet, here's a sample:

And today the Mr. Chips of DC punditry warns of Caesarism and sees the ghost of George Wallace (of all people) in Trumps trumping of the trump-trumps. How's this for an opening?


"Every sulfurous belch from the molten interior of the volcanic Trump phenomenon injures the chances of a Republican presidency."

You don't say? And I thought the Republicans had a powerful bench of tested politicians who were experienced and super-duper capable of leading the country. But these sad sacks are getting their ass handed to them by Donald J Trump of Queens, NY - How about that?! And worst of all, the GOP's "talented critics of the administrative state are being drowned out" because no one's listening to their wonderful criticism, their policy prescriptions and talking points - There listening to the dude with bouffant hairdo and gigantic balls who's speaking off the cuff and making a heck of a lot of sense to the average Joe (not "lunch bucket Joe Biden" but all the other Joe's).

But these average voters don't understand the complexity of demographic changes and voting patterns  like blah, blah, blah. White voters are shrinking and Hispanic and Asian voters are growing and "because Trump's appeal must derive primarily from his views about immigration" the GOP is killing itself chasing Know-Nothing Nativism. At least that's how they see it from DC which is where George Will and all the other talking heads and scribbler pundits live. But out in the land of the free people see a need to toss the game board on the ground and scramble the pieces because the game of contemporary politics is rigged and no matter how "talented" the critics of the administrative state might be they can't or won't change the rules. That includes the pundits, news organizations (including FOX News) and even "conservative" talk radio all of which operate WITHIN the current paradigm of big centralized government and syndicated opinion/news about IT distributed nationwide to passive viewers watching the show. George Will has been making talented critiques of the Progressive Leviathan since 1972 - to what end? Send in the clowns Jorge, Don't you love farce?