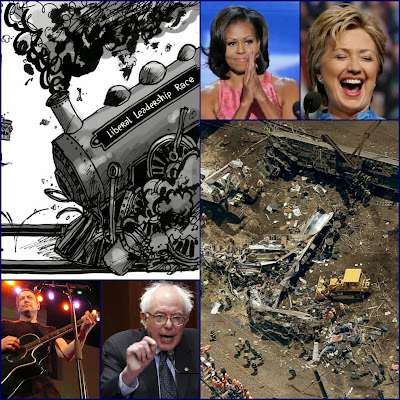 How will the Democrats keep the Obama coalition together and win in 2016? I remain convinced that John Kerry is behind all the HRC scandals with an eye on the prize for himself. He believes, in his own mind, that he can win it but he's got to get HRC off the playing field by any means necessary. But even if he succeeds, as I believe he will, he needs to guard against lefty gadflies who might buzz in to the Presidential soup and spoil what he's spent the past 30 years concocting. Uncle Joe is a clown, Albert Jr. is insane, Pocahontas a my favorite Martian are 2nd tier. Who else could challenge?

I would have said no one, except Gov. Moonbeam but he's too "Tim Cook" to win east of I-5 and West of I-95. But then Rasmussen Reports looked directly at the pink donkey in the room and asked, "What If Michelle Obama Challenged Hillary Clinton for the Democratic Nomination?"

Answer: MO would probably win. She'd win Iowa and South Carolina for sure and once the ball was rolling and Organizing for Action mobilized the HOPE base it's FBWPOTUS America - deal with it.

Fifty-three percent (53%) of voters share a favorable opinion of Michelle Obama, with 33% who view her Very Favorably. Forty-one percent (41%) regard her unfavorably, including 25% with a Very Unfavorable opinion.

1 in 4 Americans will NEVER vote for Michelle - so what? 75% could be persuaded. I doubt Hitlary or the silver-spooned surfer can make that claim.