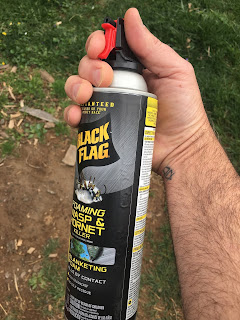 It's Springtime here on my little patch of earth and that means the birds are chirping, the bees are flying and snakes are crawling out of their holes to slither around the garden. When it comes to bees, wasps, hornets, yellow-jackets and other stinging insects I zap their nests with highly toxic poison emitted from a spray can with a 15 foot strike range. There's no reason to get up close to these critters (a guy might get stung) and dousing their nest with foaming death rubs off on them and kills them slowly, mercilessly over time - it also sends a powerful message to other bees not to build nests near my home. As a general rule I've got nothing against bees and am perfectly content to let them live in the wild, doing their thing, and wouldn't spend any time romping through the forest looking for trouble or, in even my most ethereal flights of fancy, take it upon myself to change the nature of a bee. But, if there is a project at hand - say, a fence that needs mending or a dead tree that needs to be cut down - where I finds a wasp or hornets nest "getting in the way" then I pull out my trusty can of "Black Flag" and start killing. Call me callus and cold hearted but I don't give it a second thought and rarely ask myself "how do the bees feel about this?" The bees, wasps, hornets or whatever that don't die from my poison airstrike will just move on to a different location and start building a new nest. If I'm reading my Bible correctly the Lord God gave me dominion over these creatures (not the other way around) and I'm going to exploit that "human privilege" when and where it suits me - and, just for the record, I've suffered my share of bee stings over the years so it's not like I'm invulnerable to payback though, admittedly, I give out a lot worse than I get back.

You might remember that 10 days ago Donald Trump, the US Millitary (along with England and France) and a giddy DC establishment bombed the Syrian cities of Damascus and Homs ostensibly to show the butcher/animal Assad that he can't use chemical weapons while killing his own people (everything else is okay but no nerve gas). That's just something we Yankees do from time to time - no big deal - because we've got the cruise missiles and we've got to see how they work so why not blow up some shit in the worlds ass crack to test them out. It doesn't really change anything on the ground but, boy, it sure sends a message.


Now that the dust has settled from the American strikes, with President Trump declaring “mission accomplished,” Russia logging complaints and Mr. Assad returning to work, how does Syria move forward?

The isolationist Alt-Right were the first (and most vocal) casualty of war because they all jumped the Trump Train tracks screaming betrayal and "deep state" subversion of the America First agenda the second after some chemical weapons lab was cratered. They must have been at a different Trump rally than I was because I distinctly remember the Elvis from Queens assure me and the crowd that he was going to "bomb the shit out of ISIS" and (I make this point for the geographically challenged) that means Syria. Trump told everyone in the world every day for 18 months that he was going to bomb Syria into the stone age and they voted for him in droves. Then on April 14 he launches 100 bottle rockets and it's the beginning of World War 3 and my well meaning defend the west warriors ask what it all means? So I told them:

Mueller & Co needed a swift kick in the ass to remind them who’s boss and lighting the fuse to WW3 is a great way to do it.
Risky, but at this point it looks to me like the threat of global annihilation is the only thing that will back these “deep state” clowns off the ledge.
It’s a full on spy war and it’s been going on since DJT started running in 2015 but was officially sanctioned with the FISA application days after Trump secures the GOP nomination (July 2016).
Since then it’s been white hats vs black hats inside the US IC - literally killing each other - to get the upper hand.
Mueller went “nuclear” when he got the 7th district to raid Cohens office and home taking everything.
So Trump said, “you want to go nuclear? I’ll show you what going nuclear really means.
Now back off."
Also pardoned Scooter Libby day after Syrian strike.

You read that right, I'm in accord with Joy Reid on this one - the whole Syria strike was a response to Mueller green lighting a seizure of all correspondence between the POTUS and his personal lawyer, Michael Cohen, who has handled legal issues, business contracts and intimate details of DJT's life for decades. That order by the special prosecutor crossed a "red line" and Trump decided to send a clear, unambiguous message to the "deep state" that he has the nuclear football and the launch codes so whatever they think they're doing, they better think again, and get in line. As day follows night some rays of sunlight started to shine through the newsroom windows: Rosenstein tells Trump he's not a target in Michael Cohen investigation.

This news killed Barbara Bush and sent the DNC, #NeverTrump and Deep State + Media partisans into a self-destructive fit. As events played out the Elvis from Queens got this stark warning Cohen could turn if charged, adviser warned Trump - this advisor was lawyer to the stars (and mobsters) Jay Goldberg who, after giving advise to POTUS, thought it wise to share that advise with the #NeverTrump WSJ.

Trump made the call seeking advice from Jay Goldberg, who represented Trump in the 1990s and early 2000s. Goldberg said he cautioned the president not to trust Cohen. On a scale of 100 to 1, where 100 is fully protecting the president, Cohen “isn’t even a 1,” he said he told Trump.

So the same guy who represents Armand Hammer (did someone say Russian collusion?) and Charlie Rangel (did someone say bribes and campaign finance violations?) is telling the #FakeNews media that Michael Cohen is going to "flip" and rat out DJT rather than spend any time in federal prison on whatever bogus charges Mueller and the boys concoct in their infamous dirt dig. Cohen doesn't have the stones to handle this pressure and he's not comfortable wearing an orange jump suite at the Clinton Correctional Facility in upstate NY so it's only a matter of time before he spills the beans on his long time patron and tells the world how horrible his boss really is. That's what's going to happen?

So let me tell the gullible readers (if this blog even has any) something and you can take this to the bank. I know Michael Cohen (not well, but still) because our children went to school together and for 15 years I worked right next door to Trump Tower where I got to know a little something about the Trump organization. The only "flipping" that Michael Cohen will be doing, if he does any flipping at all, will be a back flip off the top of Trump Tower on to a splattered 5th Ave sidewalk below before saying anything - and I mean ANYTHING - that might incriminate his boss, confidant and friend. In DC, filled with snakes and vipers as it is, the idea of a personal attorney betraying his client probably sounds reasonable (as they define reason) but in NYC they don't make the same calculations of risk vs. reward and, honestly, it's a matter of honor to keep your mouth shut when some lawyer/cop is trying to break you down and have you forfeit the only thing that's really worth having - your reputation.