Escape from the Clinton Correctional Facility

June 29, 2015
The Adirondacks in New York State are a beautiful place and as the official state park web site says:


"Summer in the Adirondacks is all about chasing adventure – on mountain trails and mountain bikes, in rivers and lakes, and deep forests shaded by towering pine and balsam trees. Whatever adventure means to you, you'll find it here in Northern New York." 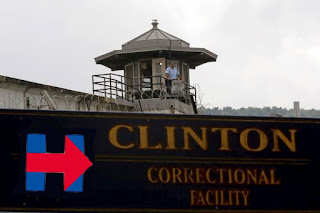 For Richard W. Matt, 48 and David Sweat, 35, that meant cutting a hole in their prison cell wall that lead to a steam pipe that led them to freedom. Yes, "a chronic criminal who was a gun-loving high-school dropout from a broken home and a big-spending Romeo" were gallivanting around scenic upstate New York for weeks breathing clean mountain air and drinking from cold, refreshing springs. What a relief it must have been from their daily grind behind the white walls of the temporary home to three thousand souls in Village of Dannemora.


"A violent melee between two factions of inmates broke out in a recreation yard at Clinton Correction Facility five days before two inmates on an "honor block" used tools to cut their way out of the maximum security prison.

The fight took place June 1 when two groups of inmates — some of whom were Muslim and others who were suspected members of the Bloods gang — began fighting, according to a person briefed on the case."

Heartless murderers though they are (were in Matt's case) it turns out that they were still better than most of their incarcerated brothers and found themselves living the high life in Clinton's Honor Block where they had "certain privileges regarding laundry, cooking, phone use and" fornicating with the female prison guards. Even with all that they still wanted to leave "home" and feel the damp earth beneath their feet - to gaze up at the nights sky and count the stars - to stretch their legs if only for a few weeks and be free. Because even though the Clinton Correctional Facility provides housing and food and healthcare (all for free) to everyone equally and, for those who behave, many additional pleasures that bring "happiness" it's still not enough - humans want more than material security and some extra food pellets at the end of the maze. No hard feelings - SweatMatt even left a goodbye note.


“This is one large piece of the puzzle in our quest to find these two escaped murderers,” Maj. Charles E. Guess, commander of the troop leading the search, said at a news conference."

Major Guess and Andrew M. Wylie, the Clinton County district attorney searched for Mr. Sweat and Mr. Matt (I am not making these names up) for weeks but couldn't find 'em. Finally they caught up with Matt and flattened him with three bullets to the head. Then they shot an unarmed Sweat when he made a mad dash for a treeline near the Canadian boarder. Gov. Andrew Cuomo hailed the capture. “The nightmare is finally over,” he said at the news conference. Maybe... or maybe it's just getting started.


People just don't know what world they're living in.