August 06, 2019
I was looking forward to my weekend tweetstorm from POTUS - the previous weekends had been consumed with tweet inspired commentary on "The Squad" and "King Elijah" with devastating effect - but all I got was a couple of tweets on trade deals, tariffs and Jina. Then the El Paseo mass murder started and I understood why Trump was keeping his powder dry. Patience is one of DJT's greatest strategic strengths and he's using it with brutal effectiveness right now on the mass murder front.

The drive from Allen, TX to El Paseo, TX is 9 hours of boredom and unless you've trudged your ass across the west Texas plain you can't imagine the monotony of the landscape. It gives a guy a lot of time to think - "what am I doing on this road?", "do I really want to kill all these people?", "why am I doing this?" - and it makes me wonder who activated this asset and sent him to Beto's home town to shoot up the soft target Walmart. That's right, a Walmart!!! Give me a frigg'n break. There have been a lot of mass shootings over the past 20 years starting with the Columbine High School massacre in 1999 which served as a pièce de résistance of Clinton's Bridge to the 21st Century running uninterrupted through the W and 0 administrations and into the MAGA present day glory. The KOTCB has commented on many of these shootings, bombings and knifings over the years - The roots of the Boston Marathon Bombing, the Emanuel AME Church shooting, Syed Rizvan Farook and his bride Tashfeen Malik, Ft. Lauderdale Airport shooting, Nick Cruz lovesick Parkland shooting, the Iranian, PETA activist, Vegan Bodybuilder, YouTuber's attack on Google and now this very oddly timed and placed "lone wolf" attack on Walmart shoppers. Many of these shooters come from places like Allen, Texas, home of gunman Patrick Crusius, which had a population of 2,000 in 1970 and has grown to a population of 100,000+ today with a median household income of $100K. Allen, TX is a lot like Parkland, FL or San Bernardino, CA or, come to think of it, Columbine, CO and these soulless, affluent, presto places are breeding grounds for pathology - as I've said before the wonder is that America doesn't have a mass shooting at a school or shopping mall every week because based on the environment and cultural decay we should, but we don't. 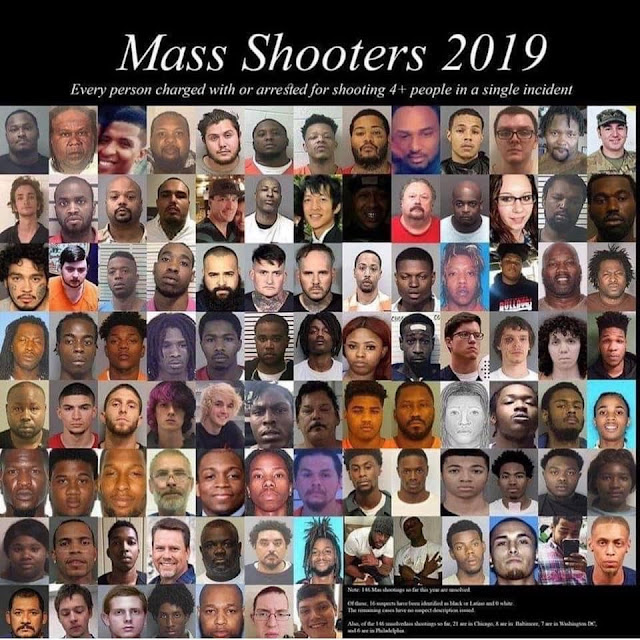 We have these mass shootings because we have a deep state that WANTS our guns.

If you want to write this off as conspiracy theory that's fine by me. I believe in conspiracy theory and if you've lived long enough and have ever been a "player" in this society then you've either participated in a conspiracy yourself or you've been the victim of a conspiracy perpetrated against you whether that be at your work, among your "friends" or in your family. If you don't see or believe that reality then stop reading immediately and got off my blog because you're not going to like (or understand) what I have to say. Granted, from childhood I was a trusting, oblivious sap with no need for street smarts or conniving strategy because I had a silver spoon in my yap and few predators thirsting for my blood. My environmental and economic circumstances changed as I reached adulthood but my psychology did not and that made me an easy mark for those with nefarious aims and the will necessary to walk all over another human being (sometimes with pleasure) to get what they want. That is all to say that it sometimes took me years, and even decades, to discern the scope of the conspiracy against me and who's who in the passion play. Worst of all, aside from a few well planned and hilarious practical jokes played on friends and family (including the KOTCB blog), I am entirely unsuited to participate in any conspiracy myself by which I might exact my revenge. I simply have to take the subterfuge, abuse and dishonesty and lump it as the cost of betrayal and greed. No reciprocity - just alienation, divorce, estrangement and schism resulting from conspiracy with no way (and no desire) to even the score - but that's just me; that is NOT Donald J Trump {Rule #9 of Trump's 10 rules for success is 9. GET EVEN}.

There is a lot of strangeness around this El Paseo shooting - on 7/28 Dan Coats resigns his DNI position and a few days later a manifesto writing Incel drives to a Boarder hot spot and home town of a Democrat candidate to shoot people in a Walmart. Everything feels wrong about this story including the fact that the parents of a Parkland shooting victim just happened to be in El Paseo that day and managed to find their way to Beto AND a NY Times reporter. Also, the coordinated and almost immediate regurgitation of scandalous talking points that blame the shooting specifically and white supremacy broadly on the rhetoric of DJT and the false consciousness of his supporters. There's more, much more, but I keep coming back to a 9 hour drive along I-20 because by the time Mr. Crusius arrived in Midway, or certainly Odessa, he would have thrown up his hands and quit no matter what his manifesto said. For you provincial coastal elites let me put it in perspective for you - Allen to El Paseo is roughly the same distance as LA to Eureka or DC to Jacksonville, FL or NYC to Dayton, OH. And just like a Clockwork Orange 12 hours on it was Dayton, Ohio where the "Liberal Democracy" Deep State spooks got a taste of Trump reciprocity that shat all over the El Paseo/White Supremacy narrative. Yes, it's a conspiracy theory born from bitter experience and a full appreciation for the stakes of this Spy War which does not mind leveraging collateral damage to press an advantage. The establishment IC were off the leash for the Congressional Baseball Practice Shooting - The Charlottesville White Riot - The Las Vegas Massacre - and they got to run wild spinning an anti-MAGA narrative on the #FakeNews outlets that serve as a Deep State bullhorn. Not this time. This time they got their message crammed right back down their throat and the realization that any shenanigans they pull off in the future will be answered with a tit-for-tat acceleration sent the Democrat politicians, their #FakeNews stenographers and the Deep State puppet masters into a fit of hysteria and hyperbolic accusation.

The Dayton shooter was an Antifa Commie Satanist who loved Progressive Democrat candidates and hated The Elvis from Queens. He was killed 30 seconds after he opened fire on a night club - those first responders are really on top of their game in Dayton (Wow! it's almost like the rookie cops knew what was going to happen). The #FakeNews has been trying to ignore Connor Betts and "his dark thoughts" but there is no way for them to discuss Crusius and his anti-immigrant manifesto without talking about Betts and his rape and kill lists.  "Dayton shooter Connor Betts was lead singer of 'pornogrind' metal band that wrote songs about raping and killing women" which is to say that he was a artistic Man of the Left or, repeating myself, a nihilist. The band was named Menstrual Munchies which might explain the love Conner felt for Pocahontas Warren but the Democrat Party doesn't want to acknowledge its porngrind constituency. They shut down 8Chan! They demand "gun control" (whatever that it). They blame Trump's tweets because Le Trebuchet rips huge gaping holes in their folly wall of bullshit and makes them cry. But none of these "solutions" will stop mass shootings because Dark Web message boards, AR-15's and Trump tweets don't cause mass shootings. Neither does isolated adolescence, lack of female attention, violent video games, absent fathers, White Nationalism, or any of the other lazy diagnosis offered by our "leaders" and assorted shrinks because these killers are MKULTRA assets activated by CIA spooks like moving a pawn on a chess board. The options we have to solve this "problem" are pretty binary - You can either start deporting and (eventually) killing Leftists many of whom will be immigrants (legal and illegal) and assorted POC - including people of the color white OR you can confiscate all of the guns in America. Make it impossible - absolutely impossible - for anyone but a cop to get their hands on a gun. We know what the Deep State overlords want to have happen - They intend to disarm and replace the population of the United States of America and transform the country into a People's Republic where they sit at the top of the power pyramid. Obama and Beto would be in good shape living in the USSA but Mr. Trump and Matt Couch would be dead meat but that's okay because they're racist bigots and xenophobic sexist men who advance white privilege. There is only one thing that stands in the way of the brave new world envisioned by Organizing for Action and that is the well armed resistance of the MAGA grassroots army occupying the fruited plain.