"Does one of us have to come out alive?" 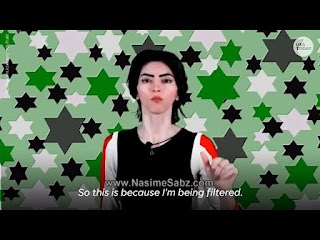 Maybe you've already forgotten about Nasim Aghdam - she was the Iranian, PETA activist, Vegan Bodybuilder and prolific YouTuber who strolled into the Streaming Media Giant's corporate office complex last week with her pistol and starting shooting people until she finally killed herself. I'm not bringing her up to grouse about #FakeNews media blackouts or downplaying of the story because it doesn't fit the pre-packaged narratives so popular where these mass shootings are concerned - that's true, but it happens every day in places all over the country where murder (often mass or multiple murders) are committed with impunity as far as the MSM megaphone is concerned. Why bitch about something as common as dirt when the real story is the same old story that's told every time someone commits an act of mass murder and that story is that no one had any idea that the perpetrator was even capable of doing what he (or in this case she) did. Example: Family of YouTube shooter Nasim Aghdam stunned by her violent attack


"Right now… I (was) thinking she never hurt one ant. How [did] she shoot people?” Mr Aghdam said.

This woman was an animal lover, incapable of killing an ant and that, folks, is not the profile of a mass shooter. Or is it? At this point I don't really know how anyone would be able to pick out a mass murder before they cary out their bloody deed. Nobody close to these people has any idea or forewarning that a mass murdering psychopath lives, eats and sleeps with them so how is law enforcement or psychiatrists supposed to identify them pre-carnage and take away their guns, lock them up, tweak their meds or whatever it is we expect them to do? The cops and shrinks are tasked with an impossible mission and there really is no defense against these live-wire screwballs except shooting them first once they pull out their gun. “She was always complaining that YouTube ruined her life” because of the “demonitization” policies that have been implemented to placate advertisers and clean up content buried in the digital landfill. So she finally snapped and took matters into her own hands - where did all that complaining get her? - Dead.

There is another reason the Green Nasim mass shooting didn't make waves and that has to do with the default cultural acceptance that women are crazy. Though it's true that female mass shooters are a rarity I don't think anyone would be surprised if they weren't and as proof I'd like to submit this advertisement for DirectTV which ran non-stop throughout the NCAA Basketball Tournament and must have tested very well with target audiences to justify the ad buy.


My question is what did this dude do? Forget to put the toilet seat down? Mix colors and whites in the washing machine? He comes home and his woman's throwing all his crap out the window and onto the street. Oops, there goes the guitar my brother handed me as a parting gift from the hospital deathbed after that tragic motorcycle crash (what does she care about your dead brother? - nothing). Man, all this stuff on the ground are the gifts I've given her over the past 18 months... and now...whoa,,. here comes my DVR. Jesus, she could have killed me with that thing. But, hey, it's all justified because now she can watch the shows the SHE wants to watch and that makes her tantrum perfectly legitimate. Not even a raised eyebrow from the broad TV viewing public - just let the sister get it out of her system, chill out and watch some tube. How else can we process this message?*

Depending on the choices she makes our heroine might get her feathers ruffled just watching the TV but, then again, depending on who's saying what an offhand comment about killing the President of the United States will usually get the brush off if it comes from a woman - even if that woman is a sitting US Senator.


The conversation took an edgier turn when Degeneres asked Harris: "If you had to be stuck in an elevator with either President Trump, Mike Pence or Jeff Sessions who would it be?"
"Does one of us have to come out alive?" Harris asked, to a roar of cheering from the audience. Even Degeneres applauded the senator's wit.

Clap, clap, clap... hilarious. What a card that Kamala Harris is! Come to think of it, she looks a little bit like the broad in the DirectTV ad - what are the chances? oh, never mind. It wouldn't matter if Kamala is the frustrated woman tossing junk out the window because she enjoys the magic shield of womanhood which absolves her of any responsibility. It's just "girl talk" and that means it's not serious so lighten up and laugh a little. Often times the weaker sex speaks the truth.

An example of great truth telling is our former First Lady Michelle Obama who chatted it up at a women's leadership conference a few days after Nasim Aghdam shot up YouTube's HQ. Much has been made of her offhand comments describing her husband BHO as the "good parent" leading our nation while he bombed the everlivin' shit out of the rest of the world. "The responsible parent, the one who told you to eat your carrots and go to bed on time." The parent that raised your taxes, squandered your inheritance, ruined your health care, exacerbated racial tensions, bowed down to Russia, China, Iran and even tiny little Cuba (for Christ's sake). That guy was our "parent" for 8 long years and for any grown up living through it FBFLOTUS just explained why it sucked so much. You thought you were electing a president but you got a parent instead and all these women leaders loved having a Parent in Chief. And now...


“And now we have the other parent,” Obama added. “We thought it’d feel fun — maybe it feels fun for now because we can eat candy all day and stay up late and not follow the rules.”

Speaking for myself, it does feel fun - I like staying up late and eating candy and breaking rules, but I have to challenge Michelle on the parent thing because DJT is a lot more like a late stage teenager or someone in his early 20's who is just realizing he's a grown-up now and can make his own decisions. Wow, freedom of choice - I'll stay up all night if I want to. I'm going to drive down to the gas station and buy a candy bar. I'm going to do whatever I fucking want and I don't care if Barack and Michelle think its a good idea or not. How do you like them apples woman leaders of the world?

But I digress because we're talking about truth-telling here and Michelle tackled a difficult truth and wrestled it to the ground a little later in her remarks when answering the question about her own political aspirations and the possibility (oh, please, please, please) that she might make a run for the presidency herself a some point in the future. The answer is no, but then she unloaded this bitter pill on her fans:

Man, oh man, you could hear the life sucked right out of the convention center as the stone cold reality of earth met the tears of women leaders everywhere. Just because you like a woman along the lines of Michelle or Oprah or Hillary doesn't mean you can just ask her to do it (run for president) like you were her parent or something. It (the world) doesn't work that way and if you don't understand that reality then you might find yourself faced with some bone headed guy as president throwing his stuff right back at ya'.

*Perhaps this madness is rooted in American Exceptionalism because in a well adjusted society this is how it's supposed to go: