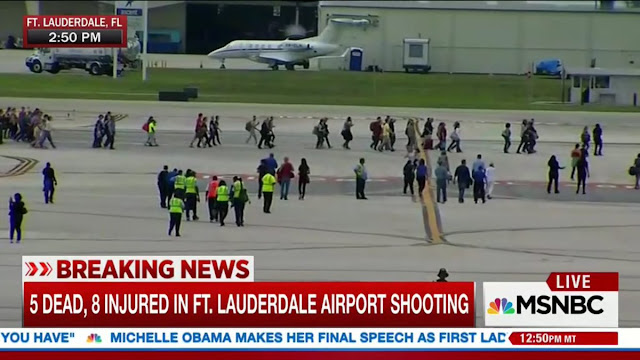 As we wrap up an 8 year presidential run it's worth taking some time to review BHO's accomplishments of which, despite the nay-sayers, there are many but, as with most things, they're not obvious - even to the man responsible.

Domestic
International
Misc.
"Still, through every victory and every setback, I’ve insisted that change is never easy, and never quick" and, inevitably, there are some..


And these successes and misses can be summed up in the personage of one guy named Esteban Santiago who shot up travelers at the aptly named Fort Lauderdale-Hollywood International Airport. The Daily Beast gives us a brief Bio with all the relevant parts missing.


Santiago served in the U.S. military, first in the Puerto Rico Army National Guard in 2007, according to the Department of Defense. He was deployed to Iraq in April 2010 as a combat engineer and returned to the U.S. in early 2011. In November 2014, after moving to Alaska, he joined the Alaska National Guard.

So this US Citizen was serving in the Puerto Rican National Guard which I'm assuming means that he was living on the island, he goes to Iraq in the middle of Obama's first term (I thought BHO ended the Iraq war) and returned "home" (wherever that was) before emigrating (fleeing?) to Alaska(!) in the middle of Obama's second term. There he beats his 40 year old "girlfriend", impregnates someone, confesses to the FBI that he's under ISIS mind control and hops a flight to sunny FLA. He hands over his gun for safe transport at the Alaska Airport and picks it up at baggage claim when he arrives in the sunshine state. Where the bullets came from no one knows. Under these circumstances is it any wonder that "Va. firearm sales nearly doubled during Obama presidency from Bush years."


“To double your yearly output in 16 years” is extraordinary, said Mike Matthews, senior supervisor in the Virginia Firearms Transaction Center.
A total of 192,653 transactions were recorded during Bush’s first year in office, and the numbers rose steadily but not dramatically during the ensuing seven years, reaching 268,136 in 2008. That’s a 39 percent increase over eight years.
By comparison, Virginia’s gun transaction numbers broke the 300,000, 400,000 and 500,000 plateaus over Obama’s eight years, jumping from 287,462 in 2009 to 505,722 last year—a 76 percent increase.
Many federally licensed firearms dealers in Virginia, along with some criminologists, have attributed the rise to public reaction of highly publicized mass shootings and the so-called “Obama Effect,” where concern for personal safety coupled with political demands for more gun control is believed to have help fuel a firearm buying frenzy.

I'm happy (I guess) to say that I've contributed to this boom in Virginia gun sales having purchased 5 guns (2 pistols, 2 shot guns and a rifle) during the Obama presidency. Not what Obama had in mind when he took office in 2008 but free citizens have a mind of their own and for every action there is a reaction. What is someone supposed to do when crazy AINO's like Santiago roam free? Give up our guns and trust the government to take care of the problem? NO! The legacy of Obama and his single greatest achievement was to force the American people - the real We the People - to engage in the political process and voice their displeasure. It is a wonderful outcome to 30 years of misery, but the last 8 finally forced the issue and for that I thank him.