December 03, 2015
I do a lot of work with the local health department so while I won't say there was a justification for Syed Rizvan Farook and his bride Tashfeen Malik to murder his colleagues in a hot-blooded, jihadi inspired massacre, there probably was a rational for his actions.


Syed Farook, born in the United States, worked as an environmental health specialist for San Bernardino County, inspecting restaurants for health violations, according to authorities and a website that tracks public employees. As part of his job, he also inspected public pools at locations including apartment and senior housing complexes and country clubs.

These health inspectors have a tough job - the building I have to visit is a very industrial bland brick cube warren that shouts GOVERNMENT and, if my experience is universal, deadens the life spark of  its employees. These folks push A LOT of paper, charge exorbitant fees for licenses, over regulate and use those regulations to harass and close down businesses. They deal with food service (cafeterias and restaurants) and other institutional environments like school systems and old folks homes so they're NOT shiny happy people. Syed probably fit right in with his grumpy, over-"worked", hated fellow employees and that allowed him to fly "under the radar" so to speak i.e. "he's not a terrorist, he's just another government worker" - all that being said, Syed's motive is still unknown.

But even if we can speculate about Syed's "triggers" it's still sort of hard to understand the rational of the Mrs. who, in solidarity with her health inspector husband, suited up and capped people who had earlier this year thrown her a baby shower. Especially when you consider the high risk chance of certain death to her person and the fear Republicans have of orphans. Oh well, I'm sure she had her reasons too but at the moment they're unknown - we don't even know what she looks like. 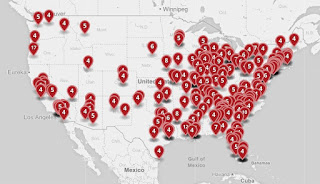 America is the mass murder capital of the world and this fact really gets under peoples skin - makes them angry and accusatory. The good people a PBS have even mapped it out for dramatic effect using data points from a website called shootingtracker.com - FYI, if you're considering mass murder then taking out 4 or more people will put you on the map. You're probably thinking, naah, I don't need the publicity and recriminations that come along with mass murder but think again psycho because if you actually look at the data you'd see that you can probably pull off your bang-bang jollies without consequence. Turns out that of the 353 mass shooting that occurred in the USA in 2015 only 67 of them have an identified alleged shooter but for all the rest of them the perp is "unknown" - you basically have an 80% chance of getting away with it. But when you "go postal" choose your location carefully because it turns out that States with the highest per capita gun ownership have the lowest mass murder rate - A state with strict gun control like California, Illinois or New York are your best bet for pitching a waist 'em all shit fit. The reasons why the high gun states are safer and the gun-control states are more mass-murder friendly is unknown.