The Most Un-American Man In America 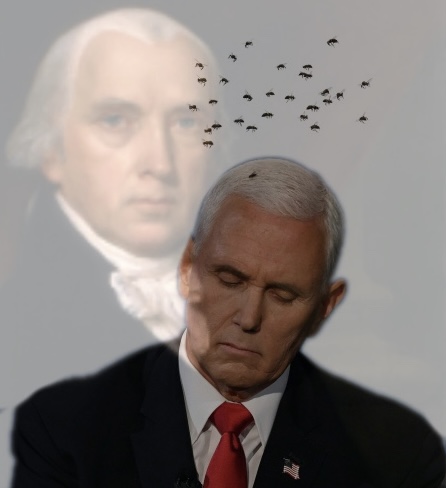 The Federalist Society has been a stalwart partner in Conservative Inc. for decades and along with the Heritage Foundation, the American Enterprise Institute they've burned through a lot of donor money playing the policy rationalization game and legitimizing the felonious US government. Last week they held a February boondoggle at a Disney World resort in Lake Buena Vista, FL and invited former VP Mike Pence to kick-off the festivities with a keynote stemwinder. At the podium with a silhouette of James Madison (the Federalist Society's logo) hovering behind him this dishonorable coward continued his monotonous shameful journey in culpability that will smear the Pence name forever. If you think that's a harsh review I'll remind you that the KOTCB blog:

Why? Because Pence has always professed his support for the document that James Madison constructed and believed in the republican principles delineated in that US Constitution. As a member of Congress he voted against the 2008 Bank Bailouts and he was a solid Governor for Indiana who navigated the various oligarchs that fund the national GOP. He stood beside Trump once he accepted the VP role and didn't abandon him late in the 2016 campaign which showed grit and loyalty - especially when EVERY cuckservative in DC was promising to destroy his political carrier when this Make America Great Again fad lost its novelty. You would think, after having seen Congress from the inside and out, after being labeled a homophobe by the Bush cabal, after all the calumny, threats and underhanded criminality committed by these swamp critter motherfuckers in the 2016 campaign that a self-respecting man would get angry and, presented with a once in a millennia opportunity to exact revenge upon his oppressors, grab the flaming sword of righteousness and chop their goddamn heads off.