February 10, 2017
I've been looking all over for my copy of The Fourth Turning because I hear that Steve Bannon is using it as a text book to bring on World War 3 so I figure I better brush up on the whys and wherefores before the rapture and be prepared as the boy scouts say. I can't find it anywhere - must have tossed it somewhere along the way or handed it off to someone in the same way it was handed to me by a left-wing Democrat friend of mine in NYC imploring me to read it because it was such a great way to "understand" history. I read it and loved it because it was so Jungian and mystical showing how history repeats itself in a natural circular pattern just like the 4 seasons of the year. I wasn't alone because, say what you will about the problems of pseudoscience and historical determinism, the book tells a great story that frames the past in a way that "makes sense." Oh yes, T4thT was a big time book on the Upper West Side of Manhattan in the late 1990's and was touted by an eco-warrior socialist as the "most stimulating book on American history he'd (Al Gore) ever read" and more:

“This prophecy is more than just a moving vision of America. It is a very personal, thought-provoking review that draws on the past to define the challenges for which today’s citizens of all generations must begin to prepare.”
PAUL TSONGAS, FORMER SENATOR AND CONCORD COALITION CO-CHAIR

And it remained a stimulating, visionary and important book for deep thinkers on the left (and the right) for 20 years up to and until about 10 days ago. Now, as one of my commie Facebook friends was just informing me "It's a crazy theory about historical cycles. There is zero evidence for it and nobody in academia takes it seriously. It might as well be something the Scientologists dreamed up." I reminded him that in May of 2007 the Daily Kos was taking the dreamed up theory of Strauss and Howe pretty seriously:


"We are at the end, but only at the end of the middle: It is the deep gulf between historical big changings in the world - a gulf of mischief and incontinence, illusions and imitations of life, false premises and sociological vanities and follies – history’s forgotten realms.
This end is the beginning.
The Strauss & Howe books, particularly The Fourth Turning, are easier to understand than the Vedic wanderings of Spengler, Jung and Toynbee. And as far as I understand it, they follow the path with some accuracy: History comes from its own nature and the seeds of the third generation are sown in the first. The seeds of the fourth generation are sown in the second. In between, the avatar which will rise later lives in shadow. (Like the "Sleeping King" in the Tolkien stories.)"

The Daily Kos writer thought at the time the "avatar" destined to "open the gate" was Al Gore, but we all know now it turned out to be Barack Obama. And it's worth searching the web to find out how many deep thinkers saw Obama's ascension to the throne as proof of "the prophecies" legitimacy. Amazon has a lot of reviews dating all the way back to about the time of the books release (hard to believe that Amazon.com is over 20 years old) and they are very enthusiastic with 2/3 of the readers giving it 5 stars - that's enough votes to break a filibuster! But that was then, in the golden age before Steve Bannon figured out how to destroy America (and the world) using the secret code hidden in this book. A good example of the public perception of T4thT Before Bannon (BB) and After Bannon (AB) can be found over at goodreads.com where there are a lot of reviews from the year Barack Obama won the presidential election and a few from the age of Trump. 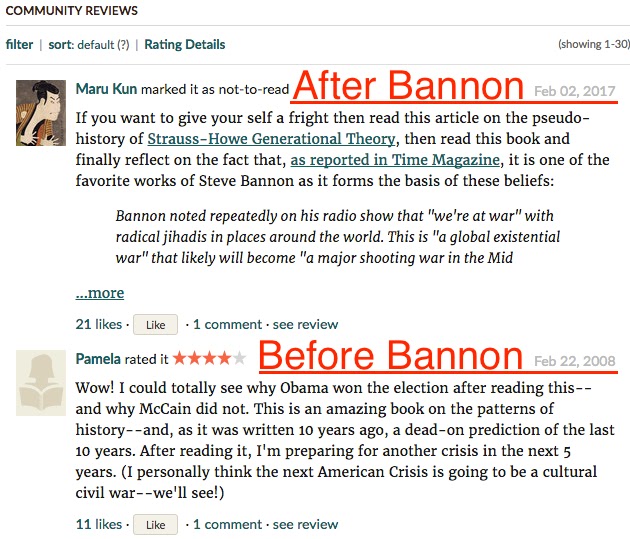 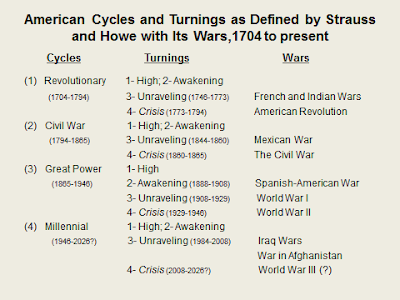 If you want to see how Bannon views the 4th turning playing out in recent American history all you need to do is watch Generation Zero which is a film he wrote, directed and produced 2 years into the Obama era. Take it or leave it there is no doubt that the American Revolution, Civil War and New Deal were the major turning points in US history and the political order and culture that emerged from these events was dramatically different than what had preceded it. If there is a recurring pattern to these events we are due for another 4th turning NOW - in fact, it was supposed to start in 2008. And that's were Pamela's review (see above) gets very interesting, especially when you integrate it with HuffPo's apocalyptic review of the new political order. The entire theory of historical cycles hinges on the concept of "Generational Archetypes" and is built upon an earlier book by the same authors titled "Generations."


"Strauss and Howe postulate that during this Fourth Turning crisis, an unexpected leader will emerge from an older generation to lead the nation, and what they call the “Hero” generation (in this case, millennials), to a new order. This person is known as the Grey Champion. An election or another event — perhaps a war — will bring this person to power, and their regime will rule throughout the crisis." 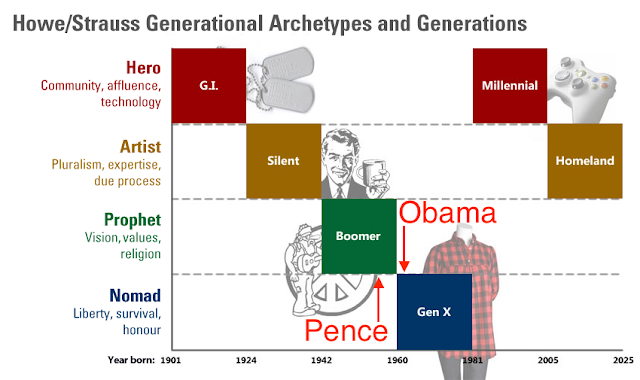 If you follow the "logic" of the book when the crisis point that initiates the 4th turning occurs a "Grey Champion" from the Prophet Generation will lead the army of the Hero Generation to establish a new order and there is no doubt, weather Steve Bannon wants to admit it or not, that this person was Barack Obama. He rode a wave of Millennial adoration to high office and they followed him, still follow him, with a blind faith that only a prophet can command. But Barack is not a prophet, he's a nomad and this explains the incredible political situation we find ourselves in resulting in the implosion of the ascendent political order and the rise of a new order that shatters the the natural progression that Strauss and Howe defined in their prophesy. The Hawaiian who got elected in 2008 was born in 1961which puts him right on the cusp between Boomer and Gen X and that imbued in him the generational qualities or virtues of both Prophet and Nomad but more weight on liberty, survival and honour. He couldn't fulfill his assigned historical role as leader of the Hero generation for a bunch of reasons but primarily because he wouldn't go to war even though the opportunity presented itself over and over again for 8 years. So the Millennials had nothing to rally around and fight for save Obamacare and global warming - they had no Champion.

So I understand the frustration and anger loosed upon the land because what happened in 2016 is a great disruption where the Grey Champion who was "on the right side of history" got usurped by a Grey Champion who is "Proudly Out of Sync With His Times." I know Trump won the election but a key element of his win was a guy named Mike Pence who pulled evangelicals and skeptical GOPers onto the Trump Train. He's been repaid for his efforts by getting the COO job in the Trump White House and for all of Steve Bannon's strategic planning it's the VP who's doing the implementation and making the damn thing run.