February 20, 2020
Every winter I grow my beard and enjoy a few month of razor free sloth. My whiskers start growing on St. John's Day Dec. 27th and I don't shave them off until the vernal equinox on, or around, March 21st. It's a day of celebration for my wife and a sweet goodbye to old man winter for all my family and friends so there's something of a month long countdown that starts on George Washington's Birthday but not this year... This year I've decided to shave my beard off on the day that Bernie Sanders dies which, depending on how things go at the Nevada caucuses this Saturday, might well happen by this time next week. If the Constitutional Monarchist wins Nevada and leads his revolutionary Blue Shirts into South Carolina with the wind at his back and captures the Palmetto State then we're looking at a Super Tuesday Jew War. Bernie is the Geo. Wallace of Vermont and Mini Mike Bloomberg is the personification of a fancy pants corrupt capitalist oligarch that Senator Equality has railed against for decades. In a battle that pits a soulless technocrat vs. a stupid communist my money is always on Red because there is no amount of money that can fix stupid. So 'Beware the Ides of March' Bernie Bros. because even if you win the Democrat Party is not going to allow your champion to carry the (D) banner out of their Milwaukee Convention.

Way back in October Bernie had a heart attack and his odds of having another one - A BIG ONE - have been getting higher every day since. Frankly, I'm surprised he survived his 2016 campaign but his meteoric rise in the polls and incredible performance in the primaries caught everyone, including Crazy Bernie himself, by surprise. It was an anomaly phenomenon created by disgruntled Democrats who watched The Elvis from Queens burn a Bush and asked themselves, "why can't we do that to Hitlery?" There are a couple of answers to that question:


Senator Sanders did his job and dutifully crammed an HRC shit sandwich down the Bernie Bros throat at the Democrat National Convention. That spineless capitulation to Debbie ''Blabbermouth'' Schultz and Donna Brazile combined with betrayal of the lazy simpletons who donated their hard earned money to Marxist platitudes should have ended Bernie's political career. He should have resigned and wandered out into the Vermont woods in shame-filled self-flagellation.

“I think he is a pathological liar,” Sanders added. “I also think he is a racist, a sexist, a homophobe, a xenophobe, somebody who is gaining cheap political points by trying to pick on minorities, often undocumented immigrants.” 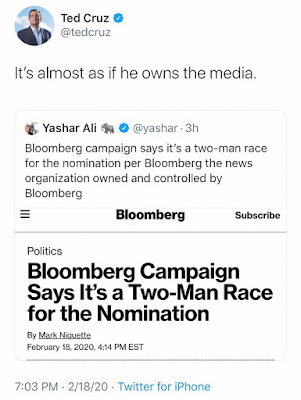 But no. One year ago "Democratic socialist Sen. Bernie Sanders enters the 2020 presidential race" and he's about to wipe the Democrat Party off the face of the earth. That apocalypse is the only reason someone like Mike Bloomberg would go to the extreme measure of entering the race and spending $1 Billion of his own hard earned money to buy the Presidency. Oligarchs like Mike are accustomed to give orders to hacks like Hillary Clinton and have "their politicians" do the dirty work of writing laws, manipulating the Administrative State and slandering enemies. It might be said that this grimy and boring work - the sausage making of government - is the job description of a modern politician. When said Oligarch throws their hat in the ring it means that he (and probably a bunch of his Oligarch friends) think the current crop of politicians are not up to the challenge of even competing in, let alone winning, the upcoming election. Mini Mike stepped onto the Democrat Debate stage last night and was attacked with gusto by the lilliputians who can't beat a 78 year old Communist who's never accomplished anything in a 30 year political career except feeding his flock to the wolves. Mike Bloomberg took a lot of flack from the #FakeNews scum for his debate performance but that's to be expected because he's basically a proxy for their (((boss))) and dissing him is cheap thrills for the newsroom. But after all is said and done the fact remains - This is a Code Red, DefCon 5, Turn It Up To Eleven EMERGENCY!!!

As Tim Pool explains, Trump 1.0 against Bernie 2.0 will result in an Electoral College wipeout of 1972 proportions and effectively end the Democrat Party because in those days the Democrats controlled EVERYTHING (Congress, Courts, State Governments, Media, Education, Big Business).

It takes a lot of personal dirt and hurt feelings to create a mountain of sixty billion dollars and the Mayor of New York City knows how to take a punch and keep on fighting and commanding and spending and owning and winning. Get it out of your system Pocahontas and Crazy Bernie and Jo(((k)))e and P.P. ButtJudge and all you hand-wringing scolds who can't stand watching Mini Mike buy his way to the top of the polls because he's not going anywhere. So far, he's been kind and held his fire - he's simply letting his diminutive presence do the talking but eventually there's going to be reconing along these lines:

Mini Mike: "Listen up losers, none of you can win against Trump. You can't even beat Bernie Sanders. Watching Trump win the Presidency again is going to be bad enough but your incompetence and weakness will also cost the Democrat Party possible gains in the Senate and might well lose us control of the House of Representatives. You suck. That's why I'm here and that's why you're all going to leave the race...  Don't give me that look, straighten up and do what you're told. I'm almost 80 years old and I'm not doing this to win - the power of incumbency is insurmountable and nobody, including me, is going to beat a sitting President. However, I've spent a fortune winning State and local races for the Democrat Party and I'll be damned if I'm going to watch you mediocrities flush all of my hard work and money down the drain. So I'm taking over and I can spend as much of my own money as I want on my own campaign and if that means joint appearances with other Democrat candidates in all 50 States then that's just the way it goes Federal Elections Commision. Am I making myself clear?"

Pocahontas: "I'll support whoever the Democrat nominee is and you're a billionaire."

P. P. ButtJudge: "What are you going to do about Bernie?"

Crazy Bernie: "Yeah, what are you gonna do with me?" 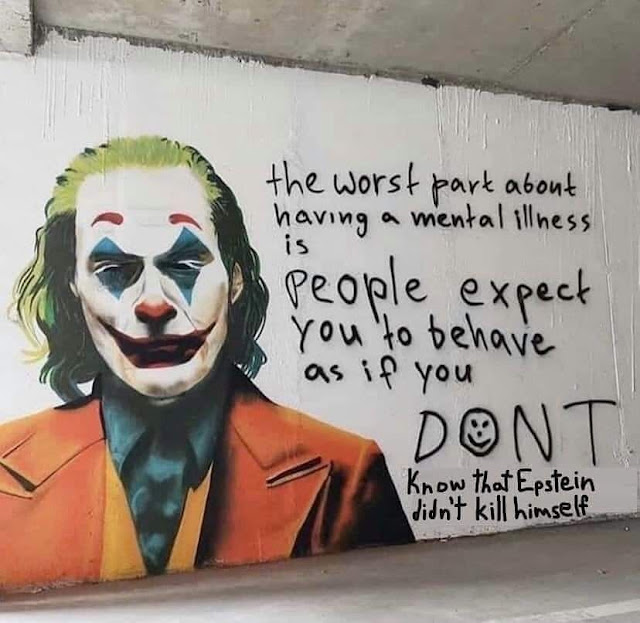