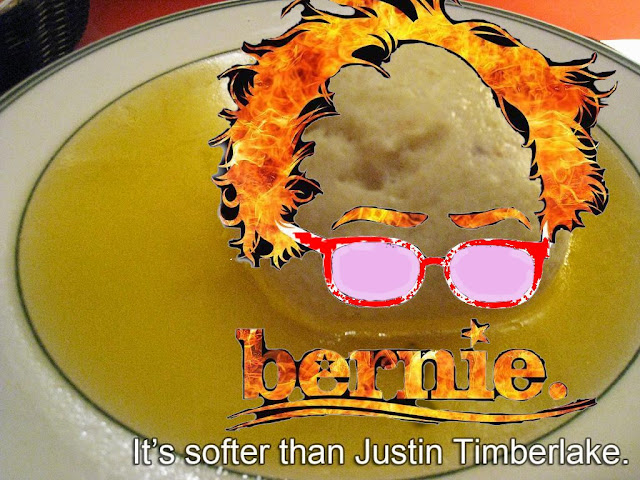 The US press is abuzz over The Donald's hostile takeover of the GOP and how unorthodox his methods and ideology are, but they see almost nothing unusual in a clown like Bernie Sanders usurping the anointed Democrat front runner. Doesn't it seem ODD that a candidate who isn't even a Democrat should be winning the Democrat primary by lionizing a "Democratic Socialism" based on the Nordic Model. The way journalists see it is that Donald Tump is an unrealistic, bombastic showman light on substance (or worse) but Bernie Sanders is an imaginative, rhapsodic advocate who's "heart is in the right place". Few are the reporters who actually question this warmed over hairy matzo ball's prescriptions for reigniting the New Deal fires and leading this country to economic and social collapse. The GOP commentariat and punditocracy are screaming at the heavens with indignation over a Trump candidacy, but the Democrat opinion makers (i.e. 95% of all working journalists and commentators) let Bernie run wide open all day long*.

Bernie calls himself a Democratic Socialist, National Review calls him a National Socialist and the Jacobin retorts (clumsily) that he's a Jewish Scandinavian. What Bernie really believes in, though it would be hard for him to admit it on the campaign trail, is Constitutional Monarchy. Denmark, Norway, and Sweden are his dream States and he wants the USA to "learn" from them. Scratch that, Bernie want America to BE them.

From the Danes National Anthem:

Our Danish flag is beautiful
The fans along the Sea
With Flag Red Bay.
And always has his white Colour
Your Holy Cross in blood,
O Flag of Denmark in battle.

Pure is the Danes's Spirit
It hates Prejudice's fetters,
And fascination's ties.
For friendship open, cold for mockery
Beats the Jute's honest heart,
For girl, country and king.

Denmark (where everything is "free") is a little bigger than Vermont (16.5 sq. mi. vs 9.5 sq. mi.) has a lot more people (5.5 M vs 600K) but that's still pretty small and allows the average worker less income per year ($45K vs $52K) - The key word being "allows". It's hard for a unconscious royalist like Bernie to understand this point, and people like him have been fighting against it or denying it since 1776, but the United States of America fought a revolution to overthrow the monarchy and, in time, formed a Democratic Republic to secure The Peoples liberty. The Nordic Model works fine if your citizenry is willing to accept a King or Queen as head of State, but what about all those Americans who actually believe in the ideas contained in the Declaration of Independence and the US Constitution that was built upon that Declarations ideals?

Norway where every citizen is a millionaire, but the Sovereign Wealth Funds that controls all the peoples money won't let them have it. It's about the size of New Mexico if you were able to pull NM out like putty, but at 4.7M it's got fewer citizens then Denmark (closer to South Carolina pop. wise). One thing New Mexico or SC don't have is $800 Billion stuffed under their Kings mattress and, God willing, they never will. Not hard to provide lavish social benefits trickled out to your subjects when you're sitting on top of an ocean of black gold and hey, if we nationalized all energy production here in the US we could... oh, never mind.

Sweden? Same story, King and Queen and "the Riksdag shall examine the government and administration of the Realm." It's like a fairytale. So peaceful that Sweden's not even part of NATO - they just opt out of war all together - and with Norway and Denmark NATO members they're pretty much covered anyway. Spend away you clever Vikings with lots of cash, no defense budget and a couple million people to manage all of whom have been trained over centuries to adhere to the demands of the State (the King). No wonder it works so well.

I pity Bernie who left his Brooklyn brownstone and wandered into the woods in search of a King. Logically he landed in New England but much to his dismay it was Old England that lived under the Constitutional Monarchy - New England was too "new" and so he began his quest, searching high and low for his true Sovereign, glancing wistfully across Lake Champlain to the maple leaf land that understood his desire, the whole time unaware that in the United Stats of America HE was his own King and he needed no other. Why there are so many lost Americans who follow this scruffy piper is a mystery and an inditement of rudimentary civics taught to our children and discussed in the body politic.

* In truth there are a few Democrats with "integrity", like David Brock, who are trying to trip up Pink Bernie but true believers aren't buying it.