A world without Christ

May 18, 2019
There are some TV shows that I associate with a political era as they are conceived, go through pre-production negotiations, financed and "brought to life" as it were during a particular political reign and their popularity reflects a change in our social Zeitgeist. Looking back I think of All in the Family as springing from the Nixon years (same with M.A.S.H) and Dallas + countless other prime time soap operas born from Jimmy Peanut's America and riding the Reagan wave like everyone else. Geo. Bush #1 have us The Simpsons and Seinfeld and other shows about nothing. The Clinton years gave us The Sopranos which exalted (and tried to explain) the humanity of a criminal family striving to act like normal people. The Shield is the show representing the Geo. Bush #2 age and the compromise required to keep a lid on things which devolved into Breaking Bad during the Obama years. Obama's time on the throne of power is epitomized by Game of Thrones and the bleak merciless world created by George R. R. Martin and brought to the small screen by D. B. Weiss and David Benioff. It is a wonder that the "world" of Westeros has captured the popular imagination of 21st Century America and the fact that it has is an ominous warning about what kind of people an influential segment of our population has become.


Stop calling. Stop texting. Stop surfing the Internet. Stop driving. Stop shopping. Stop the World - I want to get off.

The GOT society is very peculiar in that it's relatively clean, fashionable and well nourished while maintaining a Dark Ages technological ignorance and a cultural framework based on blood lines and caste which conforms to a feudal political philosophy. Why does anyone watch this foolish pageant and suspend disbelief 1,000 feet off the ground so that they might fly with dragons and incinerate the Army of the Dead marching south? I think it is because of the characters who are thoroughly modern in every respect and talk, eat, connive and fornicate just like the HBO subscribers sitting on the family room couch staring at the 60" LCD mounted on The Wall. Yes, the audience identifies with the Dragon Queen and the Bastard Knight and the Drunken Imp + so many other well drawn and developed personalities who remind them of their family, friends and co-workers. Life is brutal and short in Westeros and any human subjected to its ancient social contract would behave in a restrained and cautious manner which would appear as stilted formality to the modern eye and no one would watch that (except maybe me). The characters and GOT world are the creation of George R. R. Martin and it shows what happens when the War of the Roses and European fantasy literature is processed by a thoroughly American mind. GRRM is not the first author to use the English civil wars as a template for exploring the political and cultural life of their own time and place but this particular Comic-con fan who looks like he just escaped from his basement after playing a marathon Dungeons & Dragons contest is giving me nightmares. 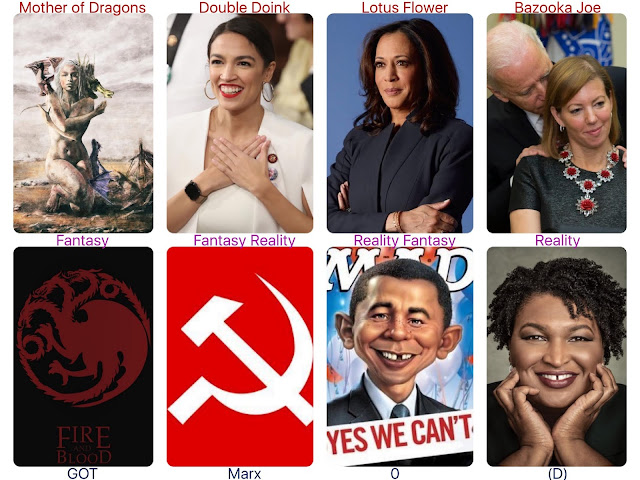 I guess I should say that I've enjoyed this TV show despite my angst regarding its overall cultural reflection because the characters and overall themes are great and the production value is turned up to 11. The KOTCB blog (Wildfire on the 4th) has already commented on the wonderful conflict in season 6 between the High Sparrow (Bernie) and Cersei (Hitlery) and how it mirrored the US Democratic primary. As the show draws to its conclusion I believe the evolution of  Daenerys Targaryen, Queen of the Andals, the Rhoynar and the First Men, Protector of the Realm, Queen of Meereen, Khaleesi of the Great Grass Sea, Mother of Dragons, The Unburnt, Breaker of Chains, Lady of Dragonstone into a ruthless tyrant and mass murderer (at the "famous last words" request of her freed slave handmaiden Missandei before execution) is a cautionary lesson. I know it's good because the hardcore fans hate it - especially the parents who named their children after the character - and the conflagration of King's Landing is juxtaposed against the burning of the Army of the Dead and the White Walker Ice King (who couldn't be burnt) that occured a few episodes earlier. It makes you think because burning zombies is good but burning surrendering armies and the peasants of the city is bad. Why?

One of the best parts of GOT are the villains - Joffrey Baratheon, Ramsay Bolton, Petyr "Littlefinger" Baelish and (now) The Mad Queen - and it's not because they're bad but because they do what every other character in the show does but they go to the extreme. A viewer might judge these antagonists harshly but to do so one must overlook the minor crimes, with the same intent, which the hero characters indulge in. When did Daenerys become "bad" in her story arc? When she watched molten gold poured over her brothers' head? When she asks the crone to use blood magic to save Drogo? When she burns the witch alive on Drogo's pyre? That's just season 1 folks - she's been committing atrocities and burning people alive the whole time but now, for some "unknown" reason, she's crossed the line. It just goes to show that a beautiful woman with a great wardrobe and 3 dragons can get away with a hell of a lot before anyone calls her on her bullshit. So now, with only 1 show remaining, we have to wonder who will sit on the Iron Throne because the odds on favorite has disqualified herself by committing ruthless genocide (again). GRRM gave a hint as to who he would have rule when he endorsed Joe Biden for President the other day on his blog:

Out in the real world, I was pleased that Joe Biden finally announced his candidacy for president.   There are a lot of good Democrats running, maybe too many, and I’d probably vote for any one of them over the present blot upon the Oval Office.  The main things I want in a nominee, however, are twofold: (1) someone who can beat Trump, and (2) someone who would actually be a good/ great president.   Biden qualifies on both counts.  Also, the speech he gave announcing his run was kickass… and so, so true.  I wish him well.


Based on GRRM's blog post alone my bet is that Lord Robin Arryn will wander down from the Eyrie after all the fighting is done and sit his butt down upon the Iron Throne. Sweetrobin is the perfect stand-in for GRRM American viewers/voters having been raised in the protected Vale of Arryn, succkeled at his mother's teet until puberty, overjoyed by watching "enemies" be tossed to their death out the moon door, utterly incapable of surviving 3 days north of The Wall, short tempered and easily manipulated. He is the perfect "progressive" ruler - just like Joe Biden.

Now that the final episode of the show has been broadcast and my hopes for a Robin Arryn ascent to the Iron Throne have been torched and melted away I'd like say something about a world without Christ and why this high dollar fantasy production mirrors our own desperate existence - before going any further I must make the point that MANY people do not watch Game of Thrones and have no interest in this dark world filled with revenge, strange magic, fantastical creatures and moral debasement - so when I say "our own" I'm talking about HBO subscribers who have been sucked into the story, characters and overall themes. There is a religious component to GOT but the theology and ritual are proposed as forms of control with no transcendent function (or whatever is "transcendent" is just an illusion or unexplainable event with no discernable purpose). The ethos of Westeros is materialistic in the extreme with no love (except narcissism) and no mercy except sweet death. The death of Daenerys was perfect - beautiful in my opinion - because it epitomizes everything I'm trying to say about the show and people (fans) hated it because... because they can't handle the Red Pill truth of the moment.