I generally like services like Spotify, Netflix and YouTube because of the amazing variety of content available and the ease of accessing the music and videos I like but one of the things I don't like about "social media" and the networked world is how these corporations can track and collect my interests or click-throughs and, I presume, sell it to whoever they want (including the CIA). To sweep my tracks I share most of my online services with my 7 year old son who listens and watches an entirely different type of programming than I do and our combined interests effectively creates the user profile of an insane person who is curious and erudite with serious authority issues and an unhealthy obsession with Roblox. I pity the Deep State agent charged with making sense of my aggregated user profiles who probably has tagged me as potentially dangerous but hopelessly ineffectual at doing anything but building Minecraft mansions. As an example I'll share a selection from my Top Songs 2018 playlist created by the AI algorithm at Spotify and break it down.

"Devil Like Me" will be familiar to KOTCB readers from The Devil's Triangle post concerning the Brett Kavanaugh witch trial. Dito for "Sleepytime in the Western World" which showed up in the I could really use a wish right now post concerning Barack Obama's theme song. "3 Bless" and "Boss" are rap songs from two degenerates names Ace Hood and Lil Pump respectively and my boy love them - he only listens to rap music and considers all other genres to be something he calls "country music" which "sucks" in his opinion. "Unicorn Farm" is an instrumental and ties in nicely with KOTCB Pestilence Rides a White Unicorn. "You Can't Stop This Motherfucker" is another pick from the 7 year old but I really like it and think the Trump 2020 campaign should consider it as a replacement for "You Can't Always Get What You Want" to wrap mass rallies and public appearances by The Elvis from Queens. "Dark Horse" is a long time favorite of mine written as an answer and jab at George Harrison's many critics who simply couldn't believe that he, the quiet one, was the most visionary and artistic member of the Fab Four. This reality became self evident with the release of various solo albums by the Liverpool lads once the band had officially broken up and, though the cognitive dissidence caused significant discombobulation at the time (early '70's), it is crystal clear now that "All Things Must Pass", "The Concert for Bangladesh", "Living in the Material World" and "Dark Horse" simply outclass anything produced by John, Paul or Ringo. It raises the question as to what beneficent and quiet influence George imparted on The Beatles in the creation of their music and has me thinking that they might have been just another Herman's Hermits without him.

Who's looking for the source
I'm a dark horse

As the 2020 Presidential contest kicks off (yes, it just started) there is, according to McClatchy's DC Bureau, a field of 30 potential candidates at the starting gate. Looking over the list it's hard to find even one dark horse as dark as DJT was in the GOP 2016 field save one - Rep. John Delaney of Maryland who announced his candidacy last summer. I say this not because of any policy prescriptions or personal qualities of the politician or the man and the truth is that I know almost nothing about him except that he represents a district in the dysfunctional state of Maryland. But the simple fact is that it is near impossible to get elected to The House as a bald man and on that accomplishment alone he is not to be discounted or taken lightly. I will feel sorry for him if he does shock the political world and grab the nomination because imagining this fine Christian soul being tossed into the Trump lion's den on the debate stage is almost too gruesome to contemplate but time will tell. I will hold out hope that the biggest little hobgoblin in the union will mount his stalking-horse and burst out the gate for another go but as of yet he's not even in the picture.

No, I'm at a loss as to who the dark horse might be in this collection of misfits but I feel confident one will emerge. Former Vice President Joe Biden is currently polling top dog and he might win if it were a dog race but this is a horse race. And the 40% of Democrats want someone who is not even listed a possible candidate so the opportunity is there for a creative thinker with guts. After all, you never know who's going to win. 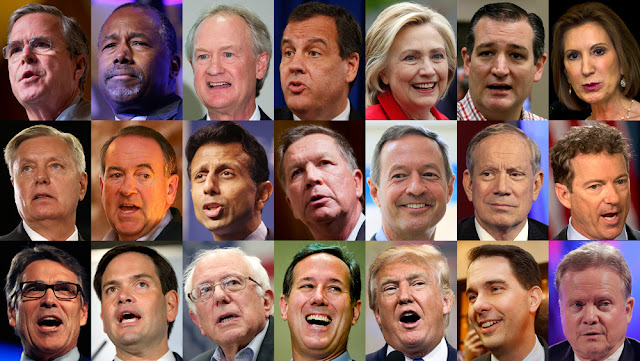 "Sea of Air" is a great song from the second best thing to ever come out of Wasilla, Alaska.