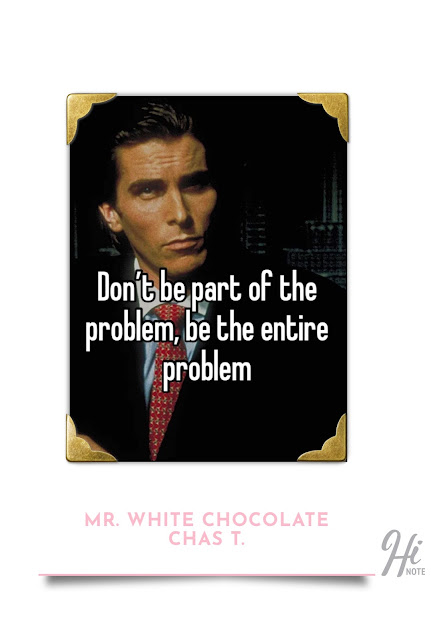 A few weeks ago the FBI inspected former President Trump's home/club Mar-A-Lago in Palm Beach, Fl in search of... something that took 9+ hours to find. Whatever that "something" is must already be known, and probably planted, by the Intelligence Community a long time ago. For the record, Trump was swift-kicked out of the presidency by the Uniparty on November 3, 2020 and after a few months of bitching about "The Steal" and teeing up the Jan6 Save America March (Insurrection) the Elvis from Queens left the Oval Office #NoHandshake on 1.20.21 to start The Art Of The Comeback from the comfort of America's flaccid penis. DJT was kicked off all social media platforms and ignored by the broadcast news networks (Fox News Channel has ghosted America's 45th POTUS since April) so aside from a few MAGA rallies and endorsing winning GOP primary candidates he has been a low profile "threat to OUR republic" even considering the possible treasonous espionage of holding classified documents. August 8th is the anniversary date of Richard Nixon's resignation and the potency of that ham-fisted (((symbolism))) must have kept AG Merrick Garland second-guessing the urgency of the Federal police action for 565 days. But "upholding the rule of law means applying the law evenly, without fear or favor" so, after a long deliberation, the Chuck Jones's in the FBI were granted hours of play time to fondle Melania's shoes and explore her underwear drawer.
The KOTCB blog has exposed the partisan nature of Merrick Garland in a post titled Merrickocracy which reviewed the self-sacrifice this "mensch" was willing to make for the Administrative State when he let Obama float him out into the Swamp as a SCOTUS nominee but his forced statement justifying the "raid" in its tumultuous aftermath was next level disloyalty/loyalty (depending on what side of the chasm you stand on). The AG delivered his brief remarks on the 5 year anniversary of the  "Unite The Right" PsyOp inflicted on Charlottesville, VA (and the nation) and concluded with a three point admonition:

First, I personally approved the decision to seek a search warrant in this matter.

Second, the Department does not take such a decision lightly. Where possible, it is standard practice to seek less intrusive means as an alternative to a search, and to narrowly scope any search that is undertaken.

Third, let me address recent unfounded attacks on the professionalism of the FBI and Justice Department agents and prosecutors. I will not stand by silently when their integrity is unfairly attacked. The men and women of the FBI and the Justice Department are dedicated, patriotic public servants.Every day, they protect the American people from violent crime, terrorism, and other threats to their safety, while safeguarding our civil rights. They do so at great personal sacrifice and risk to themselves. I am honored to work alongside them.

3. There is nothing "unfounded" about the "attacks" on the DOJ/FBI abuses of power and it's not "unfair" to question their dedication, patriotism or public service. It is very easy for policing to abuse the massive authority The State grants to the "guardians" of the social order and the leadership of these institutions must be righteous and fearless even if they are corrupt. Life on the street is full of compromise, turning a blind eye and outright criminality including graft, bribes, torture, contract killings and shady acts that cops need to do but can't expose to the public. I get it and I'm not even complaining (too much) about the extra-legal shit cops must do to protect me from violent crime, terrorism and other threats because I know its a dirty job which, just being honest here, I don't want to do. However, that is NOT what the dirtbags in the FBI were doing at Mar-A-Lago and putting those scum who removed the former President's personal items from his home in the same basket with agents who serve and protect the public is disgusting. 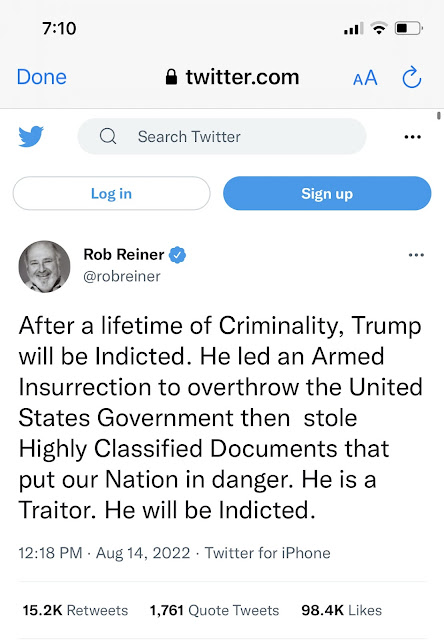 2. The DOJ "does not take such a decision lightly" but if you can add 2 + 2 it is obvious that there was no heavy "decision" to be made because the entire operation is an orchestrated fait accompli. It's just a methodical turning of the screws to construct a gallows built upon the fake Jan6 narrative with documents that were probably planted by the IC in Trump's papers during the boxing up process in December of 2020. Trump is going to be indicted by this Attorney General and the DOJ will convict the former POTUS of espionage which will permanently stain his personal reputation and the legacy of his 4 years in office. MAGA must be humiliated and shamed on a scale so grand that Liz Cheney and Mitt Romney will be recorded as heroic patriots in high school history books. 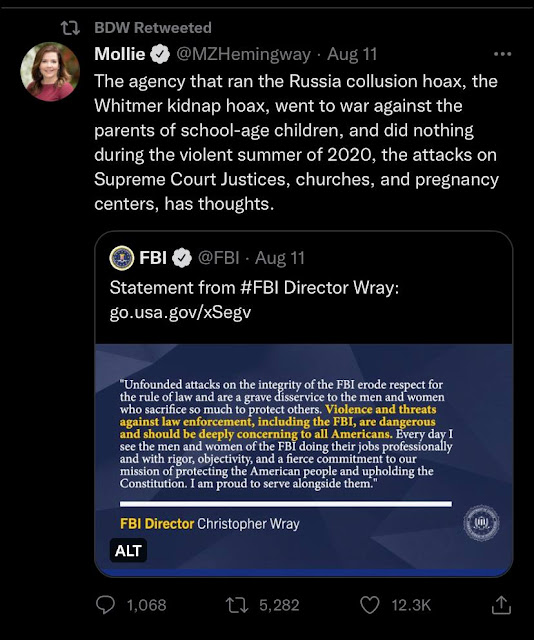 1. Merrick claims that he, and he alone, made the decision to fabricate the probable cause for a search warrant of Donald Trump's home so please don't look under the bed in search of monsters. This claim is truly pathetic in it's dishonesty and the very idea that an AG could, for any reason, harass a former President with search warrants of their home without full sign-off from the White House, leadership in Congress (both parties) and, most importantly, the NSA or key Intelligence Community stakeholders is preposterous. And besides, the girl who's running this entire get Trump operation is Deputy AG Lisa Monaco who, like Rod Rosenstein before her, is the Deep State asset placed in the DOJ to do its dirty work. If Merrick Garland had the stones to call Lisa Monaco into his office and dress her down for trampling the rule of law and inflicting incalculable damage on "our institutions" through an act of political revenge what do you think her reaction would be? She'd laugh in his face - that's what she would do because she knows who really makes the decisions in DC and it's not some septuagenarian judicial hack from the District Court.

I'm not writing this blog post to say anything new or even retroactively update my numerous hot takes on the persona of Donald J Trump who will almost certainly go down in history as the most consequential US President since FDR. From Inauguration Day in 2017 (Red Hats, White Pussy and Bluestockings) to the mid-terms in 2018 (The Day of Atonement) to the 3 November Steal in 2020 (No Step On Snek) the song remains the same - Donald Trump is not the problem. The Make America Great Again political movement and the "inclusive populist nationalism" that it champions is built upon a republican foundation of liberty, equality and property that has been eroded, demolished and stolen over the past 100 years. The "threat to our democracy" and "undermining of our institutions" is real but it is a direct result of DC Swamp's reactionary treason the constitutionally inverted control the Feds have over state and local governments.

A lowly United States Magistrate Judge for the Southern District of Florida named Bruce Reinhart is the patsy the DOJ has tapped to approve search warrants on the house of the former President of the United States of America. Today, after a week of needless delay, this goofball allowed a redacted copy of the the affidavit he bases his warrant on to be released to the public. The document will be heavily blacked out and aside from more speculation and recrimination there is nothing to learn from this fabricated bullshit the FBI put in front of this bootlicking judge. The NYTimes makes an important point towards the end of their FakeNews dispatch from SoFLA:

Ultimately, however, it is the contents of the boxes recovered from Mr. Trump’s residence, not the legal paperwork, that will determine the course of the investigation and the public’s perception of it.

It's a joke - why play along and "fight" for a standard of fairness and justice that exists only as a memory of halcyon America's representative democracy comprised of We the People. In 2015/2016 Trump and his backers tried to use the rickety framework of the contemporary democratic process to capture the Presidency and sell the Administrative State on a more compassionate set of domestic and geopolitical policies rooted in a traditional American ethos of Christian charity - That offer of peaceful compromise was relentlessly ridiculed during Trump's 4 years in office and definitively rejected on November 3, 2020. America First will never be accepted (much less implemented) by the powerful decision makers in this country and no amount of voting will change their mind. That unhappy reality is the entire problem and there is nothing above or below or outside of that problem. 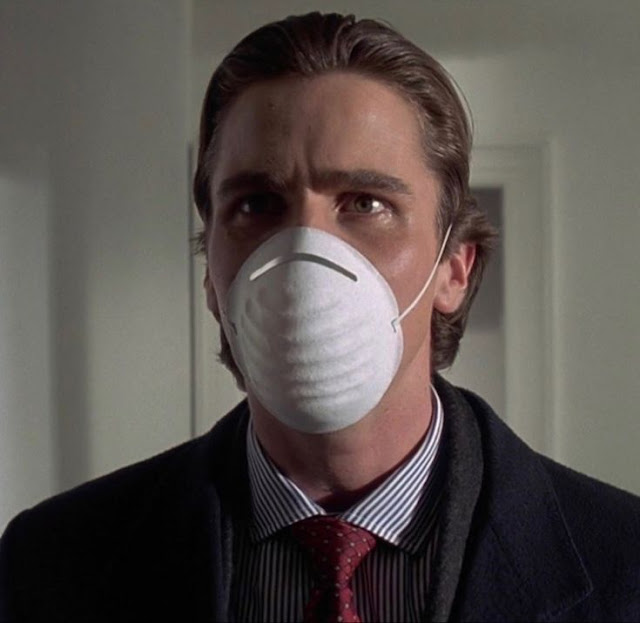