I loved the idea of the Save America March on Washington DC and enthusiastically drove up to our nation's capitol on the night before the rally so that I could wake up early and get down to the Ellipse between the White House and Washington Monument obelisk to participate in this historic event. Milling about the national mall with the hundreds of thousands of MAGA faithful adorned with their fanciful garb, flags and funny t-shirts was wonderful and I felt good being among my people. It was the perfect bookend to Trump’s first term as I reminisced fondly about the Trump Rally I attended the on the last day of the 2016 campaign and was happy to know the energy and love of Trump’s hate (hate for communists, child molesters and FakeNews scum) was still going strong. What a day! 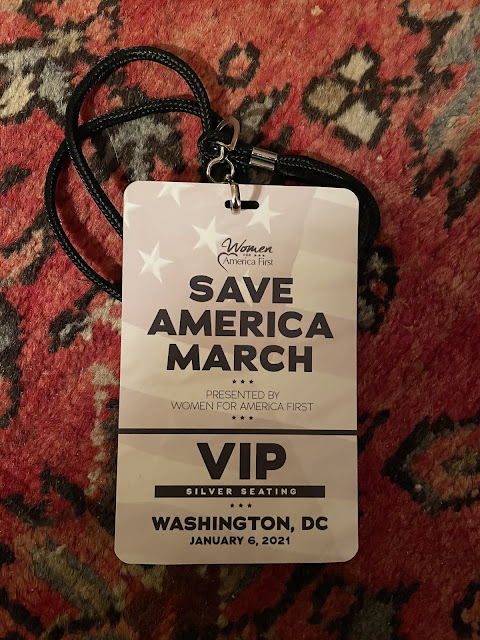 The sky was overcast and there was a cold January DC breeze blowing across the Potomac river and chilling the American Patriots as they patiently sat through warm up routines by the Trump kids and faithful friends like Rudy G waiting for the main attraction. Scheduled to come on at 11AM the Elvis from Queens was running late so the soundtrack of his glory days filled the air to keep the natives from getting too wrestles - “Don’t Stop Believing”. “Fortunate Son”, “Macho Man” - what the hell was going on? At high noon the GEOTUS arrived and took to the stage where he gave the same long, rambling speech as “the most important speech” he ever made just last month. He said that he hoped the VP, Mike Pence, would “do the right thing” and refuse to accept electoral votes from swing States where objections had been raised and legislatures had not seen the clear evidence of voter fraud and election fraud. Then he asked everyone to stroll down the mall to the Capitol building and let the House members and Senators hear “your voice” and #StopTheSteal.

It was great, A party. Walking around my old stomping grounds from the 80’s and 90’s with a bunch of middle aged boomers and younger CPAC types just taking it all in. Chanting Trump, Trump, Trump while flags fluttered by boarded up business and Cops right out of The Watchmen (TV Show) stood like stone statues keeping us from treading upon Black Lives Matter Plaza. I hopped in the truck with my posse and we drove into Chinatown looking for some Mongolian BBQ and that’s when we heard the sirens and, turning on the radio, learned the news about the evacuation and lockdown of the Capitol. We drove up to Capitol Hill but by the time we got there the fire trucks and military style police trucks were already starting to blockade streets so we drove North into Chocolate Town where no sane person will follow and snaked our way home. There we kicked off our boots, ate some Chipotle bowls and watched the FakeNews cry babies spread misinformation and propaganda about the Save America March, the marchers and the President. Pathetic scum reporters and politicians having an ontological meltdown over what appears to have been pranksters busting into “the peoples house” (i.e. their own building - after all, who pays for it?) and writing post-it-notes with unkind messages for their “Representatives.”

It’s all a big Clown World Jo(((k)))e except that 5 hours after the Deplorable Insurrection and Terror Attack on the Congressional Chamber and offices the evil criminals who usually “occupy” the building were back and, after venting their spleen about the that afternoon’s violence (and it’s perceived instigator), they certified the fraudulent and illegal electors thereby making a diaper wearing dementia patient the President-Elect of the greatest country on earth. It was obvious from the outset that the Republicans were not going to #FightForTrump and even the firebrand populists like Josh Hawley and Constitutional Conservatives like Ted Cruz were going to mail it in when showing evidence of voter fraud. It was all for show and the insurrection interrupted (and shortened) what would have been very timid political theater. When Sen. Kelly Leoffler renounced a campaign pledge she had made to her constituents in Georgia just 24 hours earlier when she stood beside Trump on stage and shouted her intention to formally object to certification of the Georgia electors it encapsulated the spirit of the joint session of Congress. VP Pence banged the gavel and it was done - the Republican Party had destroyed itself and completely exposed the sham of the US political system. There was no way it could have turned out differently because, as was pointed out in KOTCB No Step On Snek, the dye was cast on Nov. 3rd and, for better or worse, the old order is finished. It was nice to day dream about State legislatures screwing their courage to the sticking place and convening to override their Governors and the Party Establishment by rejecting the fraudulent elections in their State or, equally fanciful (in hindsight) the notion that Mike Pence would stick to his convictions and reject electors until a thorough review of the evidence had been presented to each swing state legislature. No, none of that was ever gonna happen and even though everyone knows - and believe me that by this point EVERYONE knows - that the Presidency + a lot of House and Senate seats were stolen (sacrificed) from the GOP the calculation remains that evicting Trump is worth a lifetime of shame and ridicule.

I don’t feel bad for any of the people in Congress, the cops, the reporters or anyone on the establishment side of this story because they brought it all on themselves. The thing the Democrats, NeverTrump GOP, FakeNews and Digerati never seemed to understand is that Trump is the olive branch, MAGA is the outstretched hand of reconciliation, America First is the point of compromise where We the People can all meet and coexist. They rejected it with hyperbolic name calling and angry bed wetting. I know they can’t see it and I pity them for what they are about to experience over the next few years. Buckle up.